Dave and his Arboleas Birding Group have certainly had some good sightings these past months and today's visit to the Sierra de Maria was no exception.  A few birds here I am yet to see in Spain this year.  On the other hand, in a seven day period I had two "lifers" with the Red-footed Booby at nearby Caleta harbour and then the White-backed Woodpecker on my north as I drove up into the Pyrenees.  This may be the group's last outing before the summer break but I am sure most, if not all, will continue their birding whilst they await the season.

For our final trip before our summer break we decided to head for the cooler mountains at the Sierra de Maria.  Me, driving Richard in his car (nice AC!).  We picked up Peter and headed north.  From the motorway approaching Velez Rubio we could see the Maria range was completely obscured by low cloud.  Sure enough after passing Velez Rubio we drove into cloud, but thankfully between Velez Blanco and Maria we came across sun and blue skies.  We saw a Woodpigeon en route to the Repsol garage cafe.  There, sitting outside drinking a coffee, we added House Martin, House Sparrow, Spotless Starling, Collared Dove and Common Swift.  We were joined by Trevor, Adrian, Claire with her Spanish friend Loli with her 10 yr old son, Leonardo, Michael, Karen and Mary.  We made our way to the chapel, seeing a Magpie on the way . We parked up and I scanned the ridge.  I found three Griffon Vultures sitting there.   Later a stream of about a dozen Griffons flew over.  We walked over towards the trough area.  In the man-made pool were two domesticated geese, apparently known locally as Christmas Day and New Years Day! Looking towards the trough we were not hopeful of seeing much as a cat was sitting just below it.  However, the far side of it, in a bush, we saw Subalpine and Bonelli's Warbler.  We could hear a distant Hoopoe.  We saw movement in a large shrub to our right.  A Melodious Warbler was feeding young therein.

Richard meanwhile had driven up to the Botanical Gardens, seeing Pied Flycatchers on the way.  We walked up.  In the gardens we saw Crossbill, Coal Tit, Crested Tit and Blue Tit.  Mary found a Rock Bunting. Richard had also seen a Great Tit.
Apart from Adrian and Richard, the rest of us walked the lower walk.  We added Long-tailed Tit.  Richard had added Greenfinch, White Wagtail and a Short-toed Treecreeper as we were leaving.  When we got to the chapel car park, Michael had spotted a pair of Woodchat Shrike sitting atop adjacent trees.

We then drove to the ruined farm buildings, seeing a Magpie and Jay on the way.  There we saw Barn Swallows, Crossbill and a Serin.  Moving along through the pine trees, Richard spotted a Raven.
At the water troughs we saw more Rock Sparrows and a Crested Lark.  I spotted a Northern Wheatear.  Richard (he has exceptional eyesight!) spotted an approaching raptor.  I identified it as a Short-toed Eagle.  It gave good views as it soared above us.  Heading down onto the plain, a tree had a number of Carrion Crows perched on it.  Leading the convoy, I spotted a lark perched on a rock.  Luckily I had a chance to take a number of photos.  At first I thought Tawny Pipit as it appeared to have long legs, then juvenile Calandra Lark, but I know think, looking at the photos, a Short-toed Lark.  I'm sure one of you will put me out of my confused.com misery!  We also saw a Hoopoe.  At the hamlet there were three or four Lesser Kestrels, one of which had, I suspect, a snatched baby Barn Swallow in its jaws as it was being vigourously harassed by two adult Barn Swallows.  Also I spotted two more Northern Wheatear.  Being lunchtime we headed for the La Piza forest cafe. We saw Chaffinch, Jay and Collared Dove as well as 5 Griffon Vultures which were circling above us as we arrived. 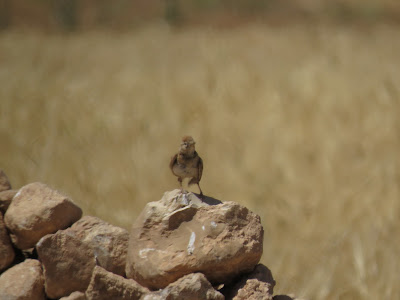 We ended up with 36 species.  A lovely end to the season, but very sadly, Mary Taylor will be leaving Spain soon to live in the UK.  We wish her all the best for the future.  Hopefully she'll return for some sun sometime!  It was lovely to have an enthusiastic Spanish lad and his mum out with us.  Hopefully they'll be joining us again.
Enjoy your summer.  Will be back in September (or maybe the odd solo day out in between!)
Regards, Dave
Check out the accompanying website at http://www.birdingaxarquia.weebly.com for the latest sightings, photographs and additional information
Posted by Bob Wright - The Axarquia Birder at 04:50