The time has finally arrived for the long drive back to the UK with some serious birding before I hit the French border.  Today it was the journey up to Daniel and all was going swimmingly until the cruise control played up and I rammed the car in front.  Could have been worse as with no way to get past the two cars in front which suddenly slowed whilst they decided who would pass the lorry first at least I only hit the one, the Mercedes, at a steady 100kph.  On the other hand, the cars in front were probably driving at almost the same speed so relatively little damage and no injuries, just a pain in the arse as I had to wait for the Guardia Civil bikes to arrive but all were very positive and helpful.  So, eventually, booked into my hostel at just after 2pm and the for a rest as far too hot for birding.  All the birds seen during the journey were to be seen later so straight on.

First stop the water treatment ponds known as the Laguna Nevaseca.  Wonderful site and lots of Flamingos on display along with the breeding Black-headed Gulls and Whiskered Terns.  Coots, Mallards, lots of White-headed Ducks soon got me excited and ere too long I had also added both Little and Black-necked Grebes.  Just the one Teal and a couple of Shoveler along with a single Gadwall.  Then the Mallard families appeared in the scope. 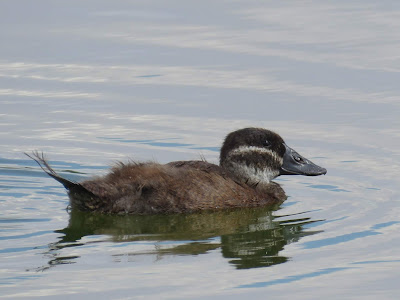 The Black-winged Stilts were obviously still breeding judging by the racket they made even time somebody showed themselves and then, of course, we also had a single Ringed Plover and a Redshank.  Also, no shortage of Moorhens on site.  Always lovely to see Shelduck with their smart coats and red bill but time to record what was going on both overhead and in the reeds.

But I digress.  One arriving at the car park I noticed a people carrier with a "Malaga Car" sticker and, upon arriving at the lower hide on the main road found Mick Richardson along with two clients on his way north to Santander as part of his Picos expedition.  Great to see Mick and catch up on the latest news.  Mick's bird call recognition was working overtime as he soon found the first Savi's Warbler to add to both the Reed and Great Reed Warbler already recorded.  Cetti's Warblers were blasting away around us and overhead we had lots of Common Swifts along with a good number of House Martins and a smaller supply of Barn Swallows.  On the other hand, lovely to see the Marsh Harrier drift by.

Leaving Mick I took a tour round the laguna and at he two smaller hides was able to add Wood Pigeons, Bee-eaters, Shoveler and Pochard to the day's sightings.  The first hide not only had close sightings of the White-headed Ducks but a good-sized flock of Greylag Geese, many with this year's young.  At the far side just before the main works I had very close views of the many Whiskered Terns and at least a dozen Black-tailed Godwits.

In the grounds of the works I also added Spotless Starling and House Sparrow and as I left quickly added Crested Lark and a lone Little Owl that took off as I approached. 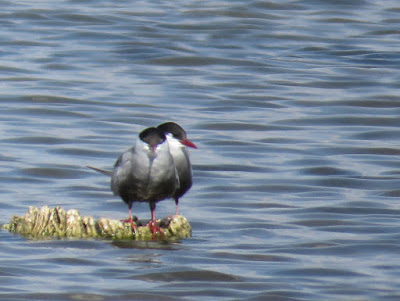 And so on to the Tablas de Daimiel where approaching the first water I had not just more Greylag Geese but also a single Great White Egret.  White Storks to my left and a short drive up the lane to the right after crossing the long, stone bridge brought a female Red-legged Partridge with just two running chicks.  Lots of Common Swifts about as I made my way top the car park where, once again, I caught up with Mick and party.

Having added very many Magpies, we eventually reached the boardwalk through the reeds having already noted the Nightingales and found Reed, Great Read, Savi's and Cetti's Warblers.  Eventually I thought I saw a Reed Warbler dash low down through the reeds and Mick was able to confirm that it was indeed one of the local Bearded Tits.  Many thanks, Mick, just what I needed!


From these view points we also managed to record three Little Bitterns and now the Barn Swallows were well and truly in evidence with many youngsters already on the wing.  Continuing on round the boardwalk circuit we then added a Linnet followed by a number of Corn Buntings plus just the one female Red-crested Pochard with two young ducklings.

On the far side of the water to our right we eventually found our only Heron of the day plus a small flock of Lapwing.  A couple of Goldfinch and a female Linnet added to the day's sightings and then Mick spotted the single Sand Martin associating with the Barn Swallows.  Lots of Cormorant and nearer to hand I even found a lone Spotted Flycatcher as I walked up to the distant hide.  Nothing to be seen apart from Cormorants and a lone Spoonbill but with the path closed it was a long way back to pick up the return path o the car park.  But, on the other hand, it did give me chance to find yet more Nightingales including many juveniles.


As I left the Tablas I too the little country road mentioned earlier where I had found the Red-legged Partridge and continued on till the end.  Not only did I find a second Little Owl but also a rather lovely Roller sat on a sign post - but not for long when it saw the approaching car.  However, by far the biggest surprise was the flock of bout 200 Cattle Egret on the fields both sides of the road and within a hundred metres another hundred or more in the trees by the water's edge.


Mick had already returned to find a host for the night but I took the opportunity, it now being about 7.30 to see if the Pin-tailed Sandgrouse might pit in an appearance back at Navaseca.  I had hardly stepped through the grass to the water's edge when I saw that lovely golden flash as two individuals flew in to take an evening drink.  No time to focus, just point and press the camera's shutter and hope for the best as the birds stayed only for a few seconds - obviously saw my presence and took umbrage, seems reasonable to me!  But it did mean that I had seen, with the Bearded Tit and Savi's Warbler three new species for the year.


Check out the accompanying website at http://www.birdingaxarquia.weebly.com for the latest sightings, photographs and additional information
Posted by Bob Wright - The Axarquia Birder at 09:52