A early start and taking the direct, motorway route accompanied by Paul Coulthard, we were gone by 7.45 and at the first, lower quarry which is a now a picnic area before 9 o'clock to start our day's birding.  Should have left mu jumper on, but at least I was not wearing shorts, as the temperature was only just into double figures and there would be sign of the warming sun until we would be well up the mountain.

Entering the service station to take the track up to the picnic area we had White Wagtail, House Sparrows and a couple of Collared Doves and even a lone male Blackbird ut in an appearance.  Arriving at the picnic area we had first a Black Wheatear and then a Wood Pigeon flew over.  So on and up to the main quarry but no sign of the Eagle Owl and its nesting hole very vare.  But we did find both Black Redstart and Stonechat with Choughs, Jackdaws and Crag Martins overhead.  However, perhaps the best sighting from Paul's point of view was a clear shot of a male Crossbill in the scope.

Continuing on up with very few birds seen but we did eventually have both Thekla and Crested Lark along with a close Hoopoe.  A Southern Grey Shrike posed rather nicely and we were to see a second individual at the top.  From this point on we began to see the occasional Red-legged Partridge and the first of the Rock Buntings.  No shortage of Chaffinches, the most numerous species to be seen, and occasional small charms of Goldfinches.

Now on the top and as we moved alongside the Charco del Negro barn we had more Spotless Starlings and the first Corn Bunting.  At the small pond, very little water, we had our first Meadow Pipit followed by a second and third as well as more Chaffinches and Black Redstarts.  Then it was round the back to see if we could find the newly-arrived Ring Ouzels.  There were probably at least twenty individual but well spread out and very flight giving poor views in terms of trying to get a photograph.  On the other hand, there were some very handsome males showing off their white chest crescent.  But before this, almost in front of the fossil cave, we had good but distant views of a pair of Alpine Accentors.  In addition to the Ring Ouzels we also recorded a couple of Blackbirds and a single Song Thrush plus a solitary Blue Tit. 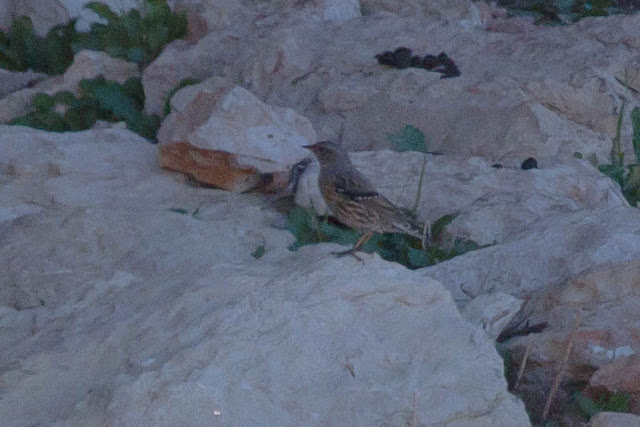 More Corn Buntings before we made ou way back to Charco del Negro and then up to the top and the long track down to Salar.  Just a glimpse of a single Ring Ouzel at the alternative site but we did find a trio of Tawny Pipits.

From Salar we took the mountain road back towards Venta de Zafarraya and made use of the recently restored road.  Common Kestrel and more Mistle Thrushes and Corn Buntings were added along with a pair of Magpies and a what looked like a very large black Rock Dove.  Initially thought from its behaviour that it might have been a Raven but considerable white on the underside.  Stopping to check out the ploughed fields for Calandra Larks we actually had a lone Grey Heron drift away.  Finally, just when we had given u all hope, the final hundred metres or so of the "Magpie Woods" as we started our descent to the fertile growing field produced about a quintet of Azure-winged Magpies moving slowly over the ground and with a few inches of the surface.


Check out the accompanying website at http://www.birdingaxarquia.weebly.com for the latest sightings, photographs and additional information.
Posted by Bob Wright - The Axarquia Birder at 06:04