With a parcel arriving from Amazon tomorrow and the good weather forecast moved forward a day, this seemed like to good an opportunity to miss.  So, up in the dark and away with all lights burning before 6.30 and arrived at RSPB Titchwell at 8 o'clock and before the staff.  I even got the best spot in the car park and then set off in the early morning light in the hope that i would pick up Bearded Tits, Bramblings and a good selection of ducks and geese.  The sky was clear and the day was to be full sun and no cloud but with a cold breeze coming out of the north-west.  But before arriving I had already had some of my birding dreams come true.  Not the fort birds of the day which were Crow, Rook, Wood Pigeon and Blackbird but  that silent white ghost, the Barn Owl.  Not having seen a Barn Owl since my last one in Norfolk almost three years ago, this individual swept slowly past the front of the car and even managed to kiss the windscreen leaving a weird impression on same.  Fortunately, the bird did not go to ground and managed to recover, no doubt with a severe head ache, and managed to fly off on its dreamy flight.  Not only this ghostly apparition but a large flock of Fieldfares almost immediately afterwards who appeared to be tucking into a breakfast of juicy red Hawthorne berries.

A small flock of Pink-footed Geese were seen as I approached the reserve but no Bramblings as the feeders had been removed over a week ago in a bid to try and restrict the rat problem with the said rodents enjoying their free feast.   But there were the friendly, welcoming Robins along with a couple of Moorhen, Magpies and a couple of Pheasants.  Similarly, no Bearded Tits as the the breeze was too strong so off in the cold to the hides and eventually the beach.  From the first hide I had a view of what was to follow with numerous Lapwing and ducks and by the end of the visit I must have seen just about every member of the tribe.  No shortage of Mallards and Gadwalls and plenty of Tufted Ducks to be seen.  A couple of Marsh Harriers drifted over which put up the first of the Brent Geese and then it was back to more ducks including Shelduck, Shoveler, Teal and Pochard.

Also present were a few Curlews and Whimbrels along with Herons, Redshank, Greenshank and Green Sandpipers plus a handful of Dunlin.  A single Grey Plover was a welcome surprise and on the beach numerous Oystercatchers and Sanderlings.  Walking the path between Visitors Centre and beach I saw a couple of Wrens and a Reed Bunting plus a Little Grebe, Little Egret and many of the recently-arrive Common Starlings.  There were indeed many Brent Geese and I also managed to find a pair of Ruff before encountering Great Tit, Chaffinch and Dunnock. 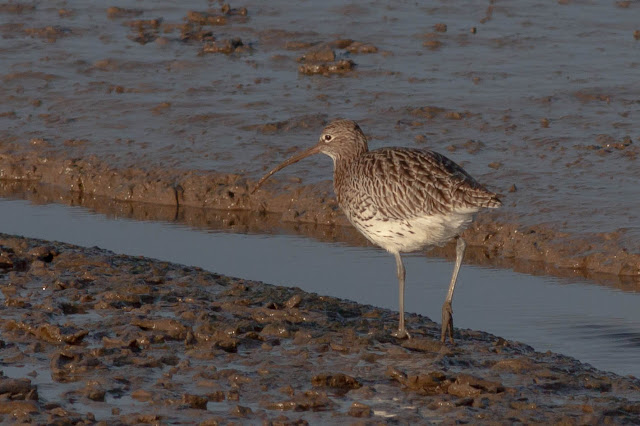 A stop at Holkham produced thousands of Pink-footed Geese, in the air and on the ground.  Those feeding were inter-mixed with hundreds of Wigeon whilst, on the opposite side of the drive, a large flock of Jackdaws were also searching the grassy fields for the odd grub or two.

Just the short stop before continuing on to Cley with brief stops at both Brancaster Staithe and Morston where more Redshanks, Brent Geese and Turnstones were recorded along with a single Ringed Plover at the latter and a Kestrel during the journey.

Cley seemed very exposed with a handful of Avocets on Pat's Pool along with a Curlew, the latter not a common sighting at this site.  I eventually braved the sea breeze and walked the beach to the ruined hide but very little to see.  A flock of about an hundred Golden Plovers were resting on the grass near the beach along with more widespread Lapwings and I though my luck had changed and picked up Snow Buntings feeding on the beach but, no, turned out to be a small charm of Goldfinches with a number of Linnets inter-mixed with their cousins.  But I did pick up a couple of Blue Tits and a handful of House Sparrows at the nearby Cley Spy shop before starting out on the return journey to Stamford.  Sixty birds for the day so not too disappointed.