A calm, dull day with much damp on the ground but still able to get in almost three hours at Rutland Water before the light rain arrived.  I say "Rutland Water" but when you see both Little and Great White Egret you get a touch of deja view and feel as if you are birding back in southern Spain!  Still, almost every duck going was seen along with all the local corvids and a rather lovely supply of passerines.  No Fieldfares this morning but I did have a quartet of Redwings.

In addition to seeing a rather fine female Bullfinch I also had a flock of about eighty Greylags Geese accompanied by a score or so of Canada Geese and a couple of Barnacle Geese.  Strange to say, having only seen the one Egyptian Goose at the main reserve the Northern Arm turned up not only the above geese but at least a score of the former including a pair perched high in a bare tree. 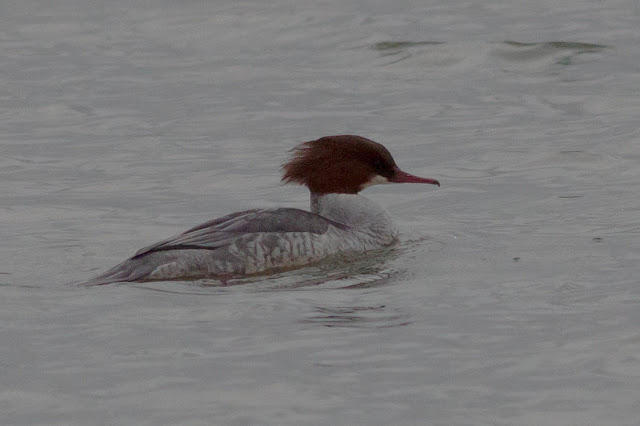 Lots of Blue and Great Tits to be seen but just the single Longtailed Tit.  A couple of Robins but no Dunnock although I did have Greenfinch, Chaffinch and Goldfinch.  Two Jays flew across the track but I suspect it was the same bird seen on the return walk to the car park.

Whilst it was lovely to see so many handsome Pintails and their bright cousins, the Wigeon along with scores of Gadwall, I think pride of place goes not so much to the Goldeneye but the Smew.  Indeed, I even found a second individual and this, along with a male and three female Goosanders and a single female Scaup quite made my morning.  On this occasion no Red Kites were seen and the female Kestrel was the only raptor noted all morning.


If you ignore the hundreds of Lapwings then waders were conspicuous by their absence.  A small flock of about sixty Golden Plovers was a distant surprise but the I only had a single Greenshank, a couple of Green Sandpipers and about a dozen Redshanks to add to the ten or so Dunlin seen from the Visitors Centre.

All in all a very satisfying time with a final total of 54 species.  Come the morning, if dry, then I shall venture forth over to Norfolk and see if I can add a few more species to this month's UK list.