An earlier night than of late then up, up and away before 6am with Barbara and Derek Etherton to collect Micky Smith and on down to Tarifa for a special meeting of the Andalicia Bird Society.  Fifteen of us were met by the representatives of the "Birdiug the Strait" company to attend the private meeting they had arranged on behalf of the Society at the Isla de las Palomas, the most southerly point of mainland Europe.  dark when we left with the promise of a little sun at first light followed by cloudy and eventually rain by mid-afternoon we were very presently surprised to not only enjoy more sunshine than cloud but, in the event, a rather  warm and pleasant day until late afternoon, albeit a little on the breezy side, and the eventual rain turned out to be no more than a light drizzle and by which time we had almost completed a circuit of La Janda and just about ready to start our return journey having recorded over seventy species during the day.

Whilst waiting for the Guardia Civil to unlock the gate to the site and let us in for our 3 1/2 hour sea-watch, we were able to record Cormorant, Yellow-legged and Mediterranean Gulls along with a number of Spotless Starlings.  Once inside what resembled an abandoned fort, still not sure whether the lighthouse was in working condition or not, with its bare soil centre and rusted goalposts one wondered whether it had been an army base in a previous life.  In the event, I presume, all the security was probably for the benefit of the illegal immigrants who were house in  restored barrack on the inside western corner of the site.

Enough pondering and on to the rocky coast where a rather lovely sea-watching facility had been built and certainly offered good shelter.  A[art from the numerous resting Yellow-legged Gulls it was obvious from the very start that something special was on-going out to sea and conformed when we informed that this was the best week for sea-watching for shearwaters.  And shearwaters there were too.  Thousands of Cory's (Scopoli's) Shearwaters were streaming westwards out into the Atlantic whilst travelling in the opposite direction there was always the occasional Balearic Shearwater.

Nearer to the coast, and often within twenty metres or less, were scores of Gannets in all stages of development and almost a s many Sandwich Terns.  We even had a couple of Arctic Skuas pout in an appearance plus the briefest of glimpses of a Whimbrel.  On the rocks below both a Turnstone and a Redshank whilst above us regular passages of small charms of Goldfinches along with Serin and the occasional migrating Sand Martin and even more Barn Swallows.  Just one Greenfinch and also single Little Egret and a Black Redstart. 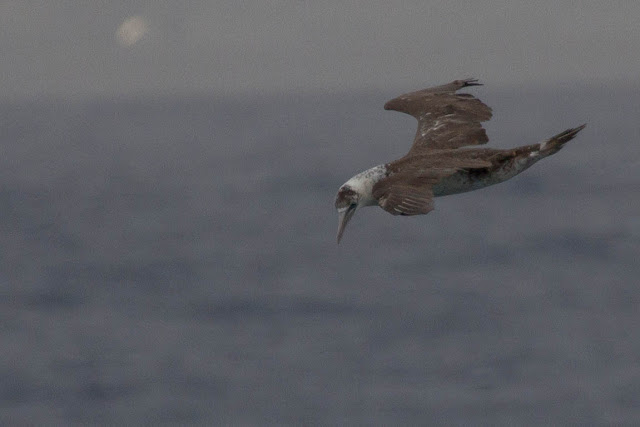 Meanwhile, way out in the Strait, whilst watching the streams of Cory's Shearwaters flying eastwards the sudden distraction of watching a large container ship heading towards the Mediterranean as a pod of, presumably, Bottle-nosed Dolphins entertained each other, and we watchers, as they bow-surfed their way eastwards. 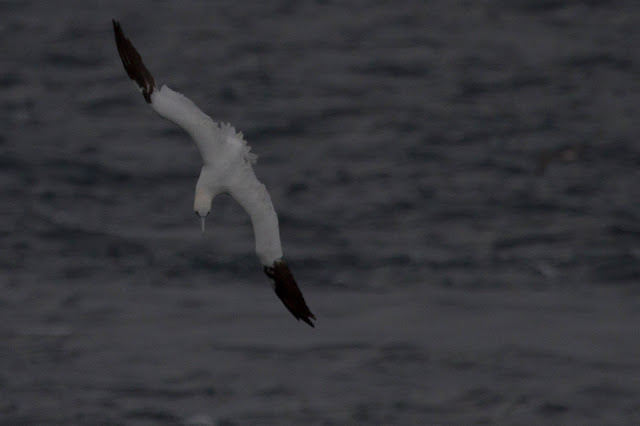 All too soon our time was up and we made our way back passed the roosting Yellow-legged Gulls to the locked gate and await our captors, the Guardia Civil, to let is out and off the site.  House Sparrows and a Collared Dove noted and then, for many of us, it was the short ride, after taking our farewells and thanks to our guides, to head up to  a nearby car park and successfully locate the resident, very small, population of Common Bulbuls.

At this point most split up but seven off us took off to unsuccessfully find the Lesser Crested tern that had been recently seen at Los Lances beach.  Here we managed to add Kentish and Ringed Plovers along with Sanderling, Little Stint and Cattle Egrets.  Before long we had found our first Meadow Pipits of the day along with Crested Larks, Stonechat and even a Red-rumped Swallow.  A few managed a distant Black Kite whilst nearer home in the shallows waters was a trio of Flamingos.  By the time we had returned to our cars we had also added Zitting Cisticola, White Wagtail and Common Kestrel.

A slight problem reaching Zahara on our way to Barbate as the road was blocked by the Guardia Civil as NATO exercises were still in progress and an enforced half-hour wait.  What to do?  Derek remembered that a couple of years ago he had been taken to a relatively nearby housing estate by John Cantelo where Little Swifts were breeding so off we all went.  Not only a few Little Swifts showing their white rumps and squared tails but also Barn Swallows, House, Crag and Sand Martins.  In addition we had a single Blue Rock Thrush, Blackbird, Robin and Sardinian Warbler.

Back to Barbate as the afternoon hours quickly disappeared where we discovered good numbers of small waders with Sanderling being the most numerous.  Lots of Flamingos and a good-sized flock of resting Audouin's Gulls before finding a few Spoonbill, Dunlin and Redshank.  Further round the water we were to also find a trio of Stone Curlew, a single Grey Plover and Greenshank along with a handful of Grey Herons and distant Mallards.  Smaller birds included Corn Buntings, Crested Larks, Linnets and a small flock of Calandra Larks.  On ;leaving we managed to see a quartet of Griffon Vultures overhead and found a couple of the local Bald Ibis.


Our final point of call, just the one car of four now, was a reverse drive around the main track of La Janda. Chiffchaffs, Corn Buntings and Goldfinches early on along with very many Little Egrets before finding the single Great White Egret.  Then, no sooner had we had our first couple of Marsh Harriers, than a rather handsome male Hen Harrier crossed low in front of the car and later we were also to see a female (ring-tailed) Hen Harrier.  Numerous Common Kestrels resting on the electricity pylons and more Marsh Harriers whilst, overhead, a very large flock of Glossy Ibis drifted across the skies.  No Red-legged Partridges on this occasion but we did see at least three Pheasants.

In addition to the Grey Herons, as the light departed on the final stretch of the track alongside the canal, we saw both Coot and Moorhen on the track as they scurried safely down to the neighbouring water and then thousands, literally thousands of White Storks resting and moving towards us to their evening roost.  At the same time the same was happening with the hundred s of Cattle Egrets who use this site as their autumn roost.   A Cetti's Warbler was heard along with a Kingfisher and we even managed a single Buzzard.   The other extremely large flock was that of Jackdaws who, presumably, might have been making their way towards a potential roost in the neighbourhood of the smelly farm.  Cranes were reported to have arrived during the week but we were unable to find any but, as a consolation, had the privilege of recording our last bird, a Black-shouldered Kite.


As we finally made our way back to the N340 and the drive home with just a little light drizzle and now almost dark we could look back on a wonderful day in great company and, for us, over 70 species recorded.

Check out the accompanying website at http://www.birdingaxarquia.weebly.com for the latest sightings, photographs and additional information.
Posted by Bob Wright - The Axarquia Birder at 11:24