Zapata, Malaga with you know who!

After dropping Jenny off at the airport for her short return visit back to the UK I met up with Derek and Barbara Etherton along with Derek's brother, Terry for an hour or so in lovely weather down at the Guadalhorce behind the airport at that wonderful wetland know as Zapata.  The flooding from the resent heavy rains had now subsided so we were just about back to normal as as soon as we arrived were looking at both House Sparrows and Meadow Pipits, having left the Spotless Starlings back in the village, and a distant Common Kestrel.  No visit here would be the same without either Crested Lark and/or Stonechat and today was no exception recording a number of each.

Whilst a Booted Eagle, and later a second, circled round above we had a pair of Common Sandpipers on the edge of the weir and a very bedraggle Grey Heron on a small island just above.  Chiffchaffs flitted about in the Tamerisks along with the odd Blackbird and occasional charm of Goldfinches whilst the lone Robin seemed happy to just sit and watch the world go by.  A female Mallard was in the upper water and both White and a lovely Grey Wagtail were observed almost in front of us.  Again, where you find Goldfinches you often find Serins and the same was true of this morning.

Moving along the track towards the hidden reed beds we had a couple of Cormorant fly over and then a solitary Zitting Cisticola that was happy to sit and pose on the fence immediately in front of the car.  Within a few metres next to the main drain we had first a Greenfinch them presumably, the same pair of Common Sandpipers previously seen on the weir and, judging by their inter-action, love is in the air! 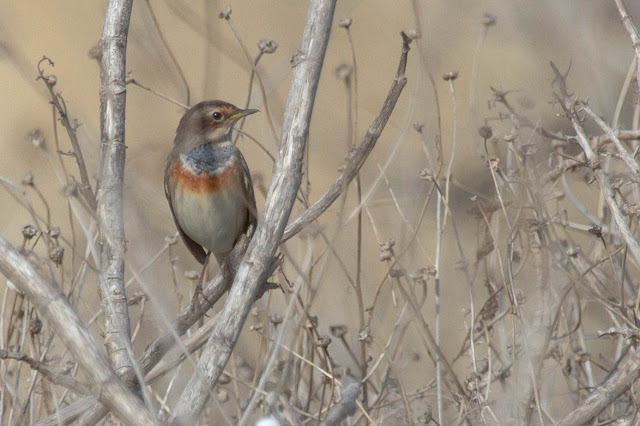 Stopping at "Short-toed Lark corner" we had the pleasure of watching an adult Bluethroat as a Hoopoe skipped by behind and another Meadow Pipit posed on the fence top.  In the distance a Peregrine Falcon and then further sightings of our Booted Eagles as a distant pair of Ravens wandered eastwards.  However, what did surprise us all was the appearance of a relatively low Short-toed Eagle, now what was he doing here rather well on his way south of the winter?  meanwhile, a lone male Linnet sat atop the tree looking imperiously down upon us and showing a lovely pink chest.

Now came a surprise as we were suddenly joined by three Spaniards who had seen us with bins and cameras and realised that we were out birding.  For their part, they were currently undertaking some ringing ("banding" if you are reading this in an American context) and had been on site since before eight this morning.  We thought we had done well to see one Bluethroat whereupon they produced another from their keep bag and informed us that this was their eighth of the morning and had been catching them regularly since August.  Also present, which they specially brought up from their recording station to show us, was a rather lovely male Penduline Tit.  It is only when you see these birds at very close quarters, especially "in the hand" that you begin to not only appreciate their delicateness but also how small a Bluethroat is compared with you field estimation.  Having seen a Chiffchaff retrieved for the mist nets Derek was also shown a female Blackcap that had also been recently trapped. 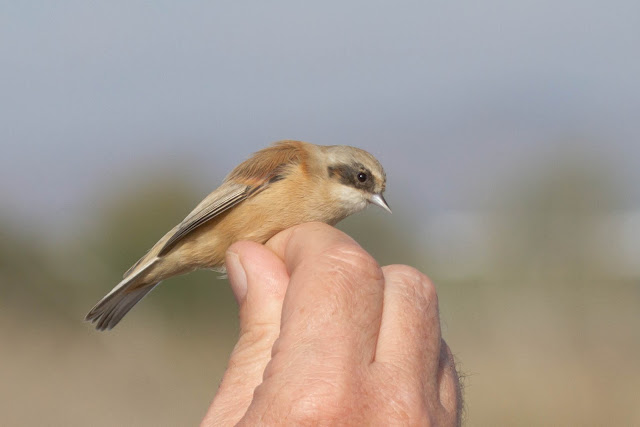 Time to depart for a quick coffee before facing the city traffic in Malaga city as I try and arrange a change of telephone supplier before making my contented way home and with thanks again to Derek and Barbara - but not before passing a couple of Little Egrets at the end of the track.

Now up close, and very close, with the Bluethroat Luscinia svecica 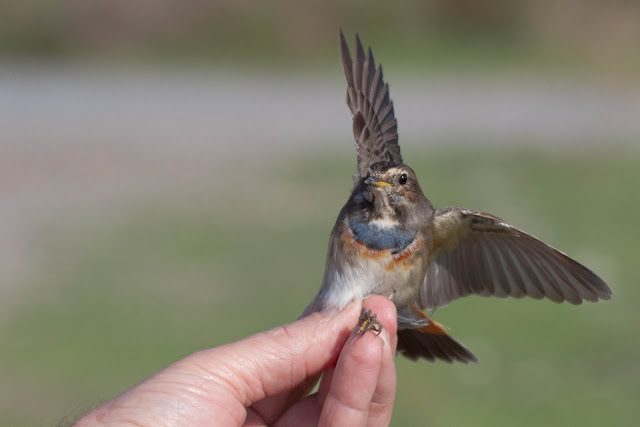 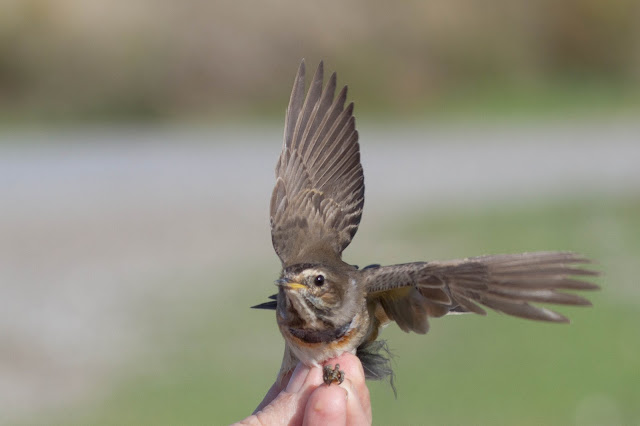 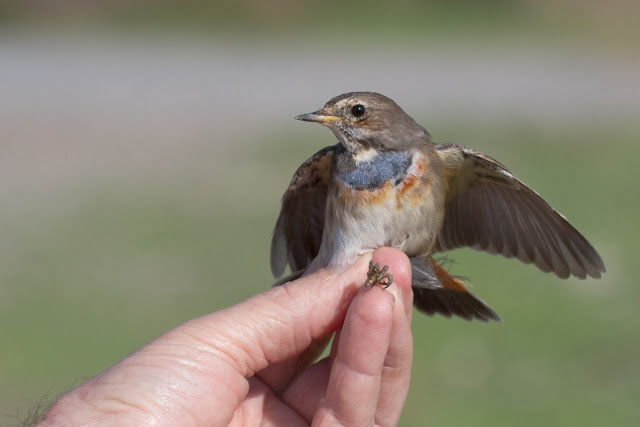 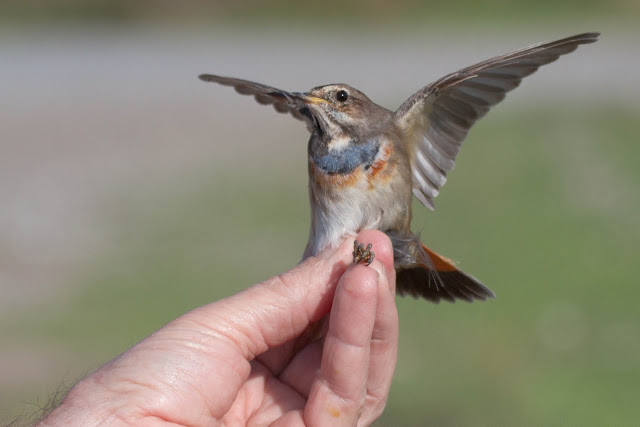 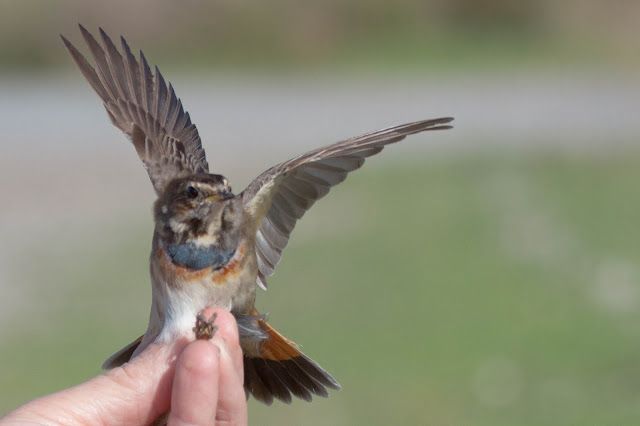 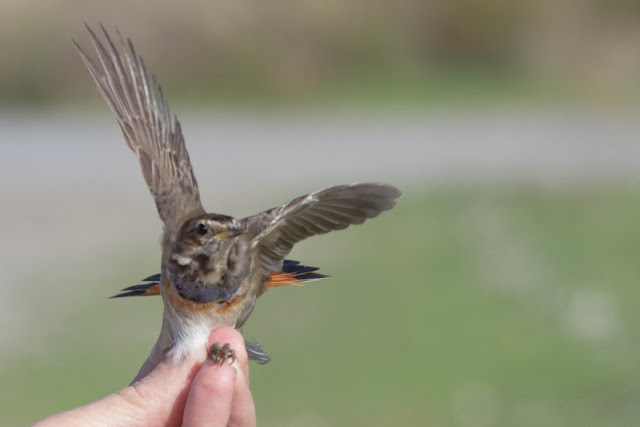 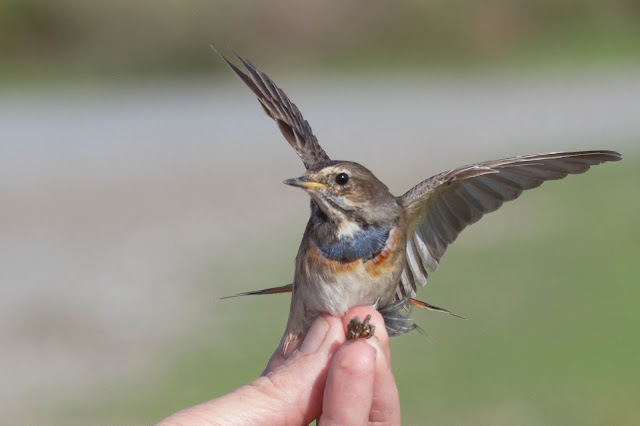 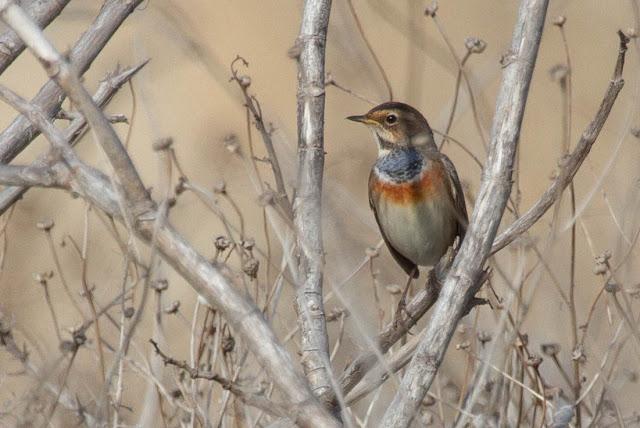 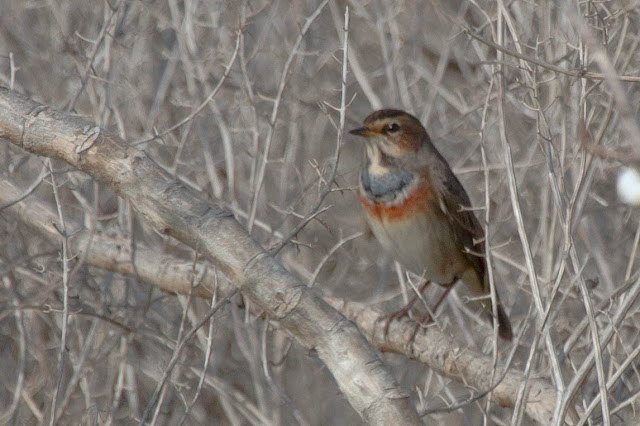 Check out the accompanying website at http://www.birdingaxarquia.weebly.com for the latest sightings, photographs and additional information.
Posted by Bob Wright - The Axarquia Birder at 09:01