What a day and what a variety of birds!  Lindsay and Keith Pheasant arrived late last night and Steve and Elena Powell arrived just as we finished breakfast so a full compliment to cross the Guadiana bridge and enter Portugal for our exploration of Castro Marim.  However, they were too late for the group photograph taken last night as can be seen from the happy faces looking out from the various balconies having taken over all eleven available apartments, thanks to the generosity and work of the Costaluz Apartamentos, Marta Jariod.


There had been torrential rain in the early hours of the morning but lovely and sunny for the day and no sign of the forecasted thunderstorms.  Indeed, there was to be more rain for the rest of the week.  Out and over the nearby border crossing and within twenty minutes we were entering the track leading to the Visitors Centre on the western, Portuguese, side of the Rio Guardiana but not before having already recorded Magpie and Red-rumped Swallow whilst at the Golf Club for breakfast.

Stopping regularly as we made our way along the track we had numerous Azure-winged Magpies, Cormorant, Crested, Blackbird, Great Tit and Lesser Short-toed Larks, numerous Stonechats and then our first White Storks.  However, the excitement was on the southern, marsh side of the track where we soon picked up a lovely Dartford Warbler and then a Southern Grey Shrike.  The occasional Zitting Cisticola added to the enjoyment along with both Common and Lesser Kestrel overhead not to mention the regular Marsh Harrier passage.  The small pools held a variety of waders including Black-winged stilt, Common and Green Sandpipers, Black-tailed Godwit and Redshank.  Naturally, there were also Grey Herons and Little Egrets to be seen.

A Sardinian Warbler and even the Bluethroat was not unexpected but it was a little surprising to also record a female Pied Flycatcher in this habitat.  Looking behind us we had the pleasure of watching and listening to the rising Sky Larks (shades of the "Lark Arising") but then the first of a couple of Buzzards.  We think Common but Steve Powell is still studying hard one of his photos with the possibility of either Rough or Long-legged.  (As soon as I get a copy or have it conformed I will pass on the information.)

On tot he Visitors Centre to look at the main salinas where we quickly found a Greenshank followed by both Dunlin and Curlew Sandpiper.  No shortage of either Ringed or Kentish Plovers along with Sanderling plus very many Avocets and Black-winged Stilts accompanying the Flamingos.  It was whilst checking out the mixed flock of Black-headed, Yellow-legged and Lesser Black-backed Gulls that we also found five roosting Caspian Terns; a very good sighting for us all.  A solitary Kingfisher dashed across the pool and in so doing led our eyes to the Great White Egrets on the far bank.  It was probably the same logic that led to us discovering the resting Osprey on a dead tree beyond the Visitors Centre.

Next it was down to the salinas near the town itself where we found copious numbers of Kentish and Ringed Plovers along with Redshank, Turnstone and an over-flying Spoonbill. Finally, I must not forget that we also managed to record both a single Black Kite before remembering that the latter site also produced a couple of White Wagtails.

Expected thunderstorms never materialised but had glorious sunshine, instead !!

Today was a visit to the other side of the river in Portugal.  But first breakfast or should I say Brunch as we didn´t get away until 10.30- 11.00.  It was waiting on our victuals that we saw Blackbird, Magpies (a count of 23 was noted), two Azure-winged Magpies, Spotless Starlings, Grey Heron and a Cattle Egret.  Also seen here were House Martins, House Sparrows, Red-rumped Swallows,Stonechat, Sardinian Warblers and a Barn Swallow.

Reaching the reserve we first saw a Common Kestrel, Stonechat, two Spoonbills flew across out front, and in the small wet areas we found Black-winged Stilts,Green Sandpiper, two Common Sandpipers, Redshanks, Black-tailed Godwits and Little Egrets.  A Southern Grey Shrike was noted sitting on a convenient rooftop and below in the shrubby areas we found Crested Larks, Corn Buntings, Dartford and Sardinian Warblers, more Stonechats, a female Pied Flycatcher and a very brightly coloured Bluethroat.  In the skies above us we spotted a pale phased Common Buzzard, White Storks, Lesser Black-backed, Black-headed and Yellow-legged Gulls, a couple of female Marsh Harriers and an Osprey.

Up to the centre which closed as we entered - must be this Portuguese time difference!! - looking out over the marshes we spotted Great White Egret, juvenile Greater Flamingos and a huge flock of Avocets.  The Osprey was seen in a better light here, Caspian Terns and a Mediterranean Gull was pointed out to us, a male and female Marsh Harrier gave us good views as it quartered over a huge red pipeline.  Then some more waders came to light including Little Stints, Dunlin, Redshank and Greenshanks, and a Curlew Sandpiper.

Moving over to the opposite side of the river, Kentish Plovers, Sanderlings, Little Stints,a Kingfisher, White Wagtail were noted and on the journey home in the marshes prior to Costa Esuri we saw Lesser Short-toed Larks, Northern Wheatears, Robin and a female Pied Flycatcher posed for us on a gatepost.

We had a small trip into the golf course - arranged by the manager himself - whereupon we were to watch the Egrets come into roost, but what we had here was far more pleasing.  At the first pool we saw Purple Swamphens, Mallard and Moorhen, at the second pool a veritable host of birdlife awaited us in the shape of Black-tailed Godwits, Common Snipe, Purple Swamphens, Moorhens, Common Coots, Gadwall, Mallard, Pochard, Hoopoes, Cattle and Little Egrets, Grey Herons, Chiffchaffs, Zitting Cisticola, Melodious and Cetti´s Warbler, Common and Azure-winged Magpies, Black-winged Stilts, Blackbirds, Little Grebe, Shoveler, Teal and a report of a Collared Praticole caused quite a stir.

As can be seen from John's report, before going to dinner we paid a visit to the 17th green.  At dinner last night the Golf  Course Manager, Jaime Riestra introduced himself to me and explained that he had a lovely lake not five minutes away which attracted a very large evening roost.  Would we be interested?  Naturally, I said we would but suggested 6.30 was a better time to visit as we would like to see the birds already there and then the incoming birds.  Not on;y was he more than excited to show us "his" lake, he even provided a couple of golf buggies to assist a coupe of the party who might have experienced a little trouble walking to the green.  How generous (lucky!) could this be. 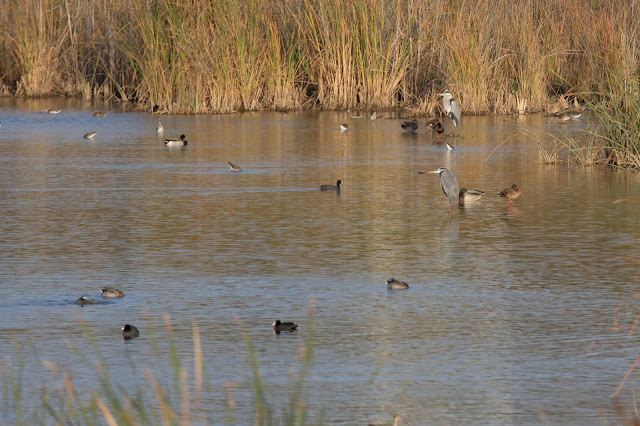 On arrival what a sight greeted our eyes with a wonderful collection of at least 39 species including a number of free-breeding Muscovy Ducks.  These birds had turned up about five years ago and were now breeding successfully in the area around the main pool.  We were also shown a neighbouring pool which, according to Jaime was the main breeding site for the ducks.  On showing us he was amazed to see that his dry pool of a couple of days ago now contained small pools of water as a result of recent rain.  Indeed, on the far bank we counted a quartet of Purple Swamphen whilst a little further away we watched a covey of thirteen Red-legged Partridges wander along the edge of the golf course.  When informed of the number of birds seen from the pool area, including a trio of Spoonbills, Jaime was absolutely amazed.  On return to the Club House for dinner we made sure that Jaime had a copy of the latest Birds of Andalucia quarterly magazine and, the following day, was enrolled as a member.