With the breakfast problem now solved (left Barry to collect our breakfast so that we could eat it as a packed lunch) we were able to make an earlier start for the forty minute drive up to the Marismas de Odiel and the prospect of a fabulous day's birding, especially given that low tide was at 11.45 so plenty of mud about.  The second positive about visiting this site is that you do not need to be in a convoy and everyone can do there own thing on the single road that leads down the spit, although most of us spent some considerable time at the Visitors Centre area where there was still low cloud on arrival.

Having recorded Blackbird and Azure-winged Magpies as we arrived along with the very "talkative" Spotlesss Starlings in the car park trees, it was straight to the confluence of the rivers where we immediately found a range of waders including Ringed and Grey Plover, Redshank, Dunlin, Turnstone along with a couple of Whimbrel.  Little Egrets and Herons were also feeding and a couple of Great White Egrets were seen in the grass on the far (inland) bank.  A Kingfisher had found a convenient dead branch in the smaller river to await his next meal and a flock of Cormorants flew over.  Black-headed and Yellow-legged Gulls were present and as we walked round the back towards the Odiel viewing point we also recorded Robin, Sardinian Warbler, Wood Pigeon and Magpie.


The Odiel muds produced another Whimbrel and the first Curlew of the day along with both Redshank and Greenshank and then a solitary Sandwich Tern resting on a buoy.  This area also produced a good number of Kentish Plovers before we moved on tho the small pond in front of the salt pile, passing a lovely Southern Grey Shrike on the way, finding more Kentish Plovers along with Redshank and Dunlin plus Coots, Moorhens, Mallard, Gadwall, Teal and Shoveler.  A few Black-tailed Godwits and juvenile Flamingos with the Gulls mainly of the Lesser Black-backed variety.  A Common Sandpiper bobbed away at the front of the pool whilst his cousin, the Green Sandpiper, did likewise at the back.  There were also a number of Black-winged Stilts and then we were off to explore the little spinney behind the Visitors Centre where we found both Willow Warbler and Chiffchaff along with Blackcaps and a female Pied Flycatcher.


As individual cars departed to make their respective ways down the causeway I met up with local guide and ABS member Manu Mojarro who not only told me what was to be seen from the gazebo viewpoint on the opposite side of the road but also a good site for when we take a closer look at the Ayamonte district in the morning.  On arriving I soon found plenty of Dunlin and Curlew Sandpipers along with Little Stint, Grey, Kentish and Ringed Plovers, Redshanks, more Whimbrel and Black-winged Stilts.  However, it was here that I not only found a small group of Bar-tailed Godwits but also a handful of Slender-billed Gulls and the lone Marsh Sandpiper that Manu had mentioned.  In the distance, my first Marsh Harrier of the morning and on the pool behind a pair of Shelduck along with the Avocets and Flamingos.

Time to move on down to the Juan Carlos park on the other side of the high bridge having noticed many more Flamingos along with Redshanks, Greenshanks and White Stork on the way.  Meanwhile, ahead of me, Stephen and Elena Powell had recorded Little Tern, the first Osprey and a Whitethroat.  A new selection of birds in this area included many Northern Wheatear, Stonechats and Crested Larks along with Zitting Cisticola, Common and Black Redstart, Hoopoe, Whinchats, Corn Bunting, Goldfinch and Spanish Sparrow.  New birds on the water included Spoonbills and we even had another Great White Egret and managed to record Cattle Egret.  John and Jenny managed to pick up a passing Raven and there were many sightings of Robins and Chiffchaffs.  Whilst I was on the other side of the road trying to locate a Linnet, a friendly Meadow Pipit landed at the feet of those other members present!  Bonelli's Warbler was identified along with a pair of rising Sky Larks.  Olly managed to find a Blue Tit and then we all had a good view of our only Spotted Flycatcher of the week.

Could things get better?  They certainly could.  Chris managed to see a Collared Pratincole sat on the inland beach and we had abut eight Honey Buzzards pass over at the Juan Carlos park.  A feeding Lesser Kestrel was noted along with Common Kestrel.  On our way back to the Visitors Centre Roger and Jean Smith had a Booted Eagle so low it almost flew into the windscreen whereas I had a low-lying Hobby cross in front of me, the second individual seen this week.  Judging by the large numbers of dragonflies about it was, perhaps, no surprise that these lovely falcons were being seen.  John Brooks and party had, meanwhile, been at the gazebo mirador and had recorded a Caspian Tern and feeding Osprey and, I believe, Barrie and Jan Avis had actually watched the bird catch his fish; lucky them.  Across the water, a number of Black-necked Grebes were recorded by John, Gerry Licence and Margot Grinstead.  And so we came to end of our Odiel experience with a late Grey Wagtail and a Wren seen by Barrie.


But the day was not over in birding terms.  Once again many of us returned to the pond at the seventeenth green on the golf course and manager Jaime even managed to find a quartet of golf buggies for our use; what a kind and generous offer.  Not quite so many birds as the previous night but we did have, in addition to the arriving Spoonbill, an overflying Caspian Tern which displayed well in the evening sunshine.  The Snipe and Black-tailed Godwits were still in residence along with the Teal, Gadwall, Shoveler, Pochard and Mallard.  The single Little Egret and a couple of Grey Herons were joined by the incoming Cattle Egrets and Coot, Moorhen and Purple Swamphens wandered and swam around the edges.  Hoopoes, Stonechats, Melodious Warbler, Chiffchaffs, Blackbirds, Magpies, Crested Larks, Northern Wheatears and White Wagtails were on the land side and even feeding Barn Swallows were noted over the water.  Naturally, the Muscovey Ducks came down to the water as the sun finally began to dip away. 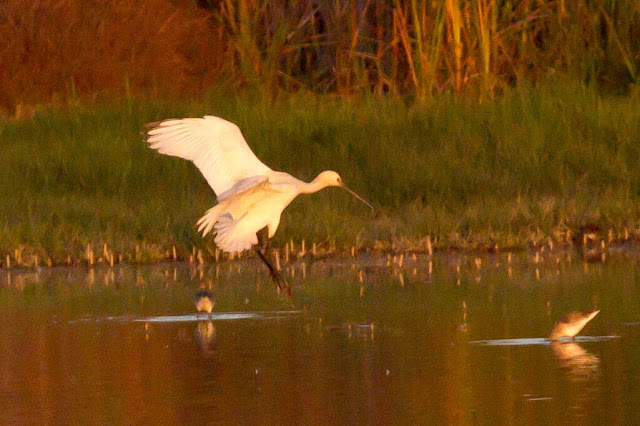 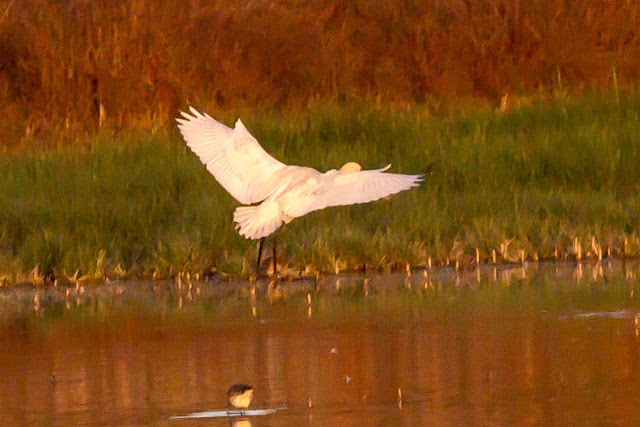 John Wainwright's report for the day is as follows:

A foggy start then a very warm and muggy day.

As we left the complex and headed for the autovia a Brown Hare ran across the road to our front and disappeared into a patch of rough ground.

Our first port of call was the small pond where the new cane hide is being built, here we found Shoveler, Black-tailed Godwits, Ringed Plovers, Moorhen and Common Coot - the lack of birds here I can only put down to the workers at the new hide!  Down to the Visitors Centre and looking upstream to the road bridge we saw Whimbrel, Common Sandpiper, Ringed and Kentish Plovers, Kingfisher and a Redshank.  Whilst downstream of the bridge we found Dunlin, Little Stint, Grey Plovers, Redshank, Greenshank,more Whimbrels, Turnstones, Little Egrets, and more of the already mentioned waders.  A group of Common Cormorants flew over as a passing Sandwich Tern, Black-headed, Yellow-legged Gulls and a Wood Pigeon.


We then moved off down to the boardwalk through the trees, here we found Southern Grey Shrike, Robin, Sardinian Warbler and a few Spotless Starlings.  We then split from the group along another part of the boardwalk where we saw Pied Flycatchers, another Robin and a few Chiffchaffs. From the hide we located Willow Warblers, several male and female Blackcaps and Cetti´s Warbler.

Moving along to the point we noted at least five Great White Egrets, Oystercatchers, Grey Herons, Little and Cattle Egrets, Curlews, Whimbrels, Lesser Black-backed Gulls and more Yellow-legged Gulls and Black-tailed Godwits.  Parking up we walked over the boardwalks to the beach here we found at least five female and two male Common Redstarts, a Whinchat, Northern Wheatears, Goldfinches, Crested Larks, Hoopoes, Corn Buntings, Black Redstarts, Chiffchaffs, Stonechats and a Peregrine Falcon and as we prepared to leave the reserve a Hobby was seen hawking over the stone pines.


I see that John also recorded the Hobby and counted five Great White Egrets near the Visitors Centre - and more at the far end of the pool at Juan Carlos.  And most of us also missed the Peregrine Falcon.

And so our three days birding with the Andalucia Bird Society came to an end albeit at least seventeen of us were to stay on for at least another couple of days whilst down in this fabulous birding area.  Until corrected, I think our final tally of species was 124.


Check out the accompanying website at http://www.birdingaxarquia.weebly.com for the latest sightings, photographs and additional information.
Posted by Bob Wright - The Axarquia Birder at 07:24