Slightly later starting out on my return river walk up the Rio Algarrobo this morning and, as a result, fell foul of dog walkers, exercisers and even an organised walking group of eight, all carrying a pair of clumping polls.  Well, that should keep most of the birds away until they were well past me and remind me in future to try ad get away by 9.30 at the latest!

Both Blackbird and Chiffchaff outside the house as I made my way up to and across the N340 and the start of the walk where I was immediately presented with a couple of Collared Doves and a handful of Monk Parakeets.  In addition, the first couple of trees were paying host to a small charm of Goldfinches and then through and into the open trees where I found a pair of White Wagtails, single male Blackbird and a similar Black Redstart.  A lone Spotless Starling was off to my right and the old bare tree held a quartet of Wood Pigeon and a couple of Common Starlings.

Carrying on up towards the sports hall I had first a couple of Chiffchaffs then a good number of foraging House Sparrows.  Lots more Collared Doves, a few more White Wagtails and another handful of Spotless Starlings.  Once under the motorway very little to be seen near the Experimental Station other than three Common Starlings in the same bare trees at the back.  It's almost as if somebody has planted plastic replicas to have them present on every occasion!  But at least there were also two in the top of the tree on the opposite side of the track.

More Mediterranean Gulls departing the hidden reservoir along with a few Lesser Black-backed Gulls but certainly not as many as on my last visit.  A couple of Serin took off in front of me and the first Stonechat was recorded on the reservoir fence along with more House Sparrows.  Reaching the ford in readiness for my hop, skip and jump over I hesitated for a moment to follow the movement to my right upstream and not only found a single Greenfinch abut also a first Meadow Pipit for a week or so on the grass below.

Time to start the return journey and a few more Black Redstarts and White Wagtails but also a first Sardinian  Warbler of the morning.  Back under the motorway and I had to wait until behind the football field before seeing my Hoopoe.  I was about to take the road across the ford towards the sewage works when I came across a handful of Meadow Pipits, so lovely to see these birds again but always, it seems, feeing in long grass so preventing a decent photographic opportunity.  No sooner seen than a Greenfinch flew upstream then through the water as a Cattle Egret flew overhead followed by a further three at the works itself before continuing on, noting a second Sardinian Warbler and over the weir to take the track back home.  And still a couple of Wood Pigeons in the old, bare tree. 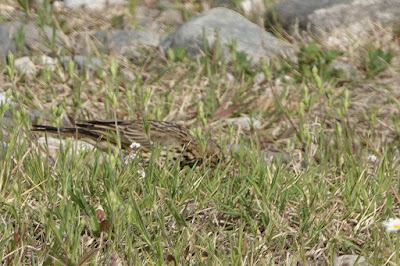 Check out the accompanying website at http://www.birdingaxarquia.weebly.com for the latest sightings, photographs and additional information
Posted by Bob Wright - The Axarquia Birder at 08:36