An earlier start this morning and up at the start to the river walk before 9.30 where I immediately encountered both Monk Parakeet and Collared Dove and before reaching the more open trees had already recorded four Blackbirds.  Indeed, by the time I returned never mind a day when I perhaps see not a single individual, I had actually recorded a dozen birds, all bar two being males.  Whilst still in this area I also had a trio of Greenfinches, and another five later on, along with the first Black Redstarts and White Wagtails.

Once at the enclosed barbecue area I was able to tale a closed look at the large bare tree which usually has something to offer and on this occasion nine Wood Pigeon accompanied by a single Collared Dove.  As I checked for any Common amongst the handful of Spotless Starlings, there were none, that arrived on the top floor I also noticed a single Goldfinch off to the left of the tree's summit and one of the Wood Pigeon took its departure to a nearby field.

Then it was on upwards with a number of Collared Doves noted all around me to double-check the white "blob" atop an electricity pylon on the far side of the ford opposite the sports hall.  As I though, a Cattle Egret with a second just below and both took their leave as I lifted my camera whilst still a good distance away on the main path.  Close by another quintet of starlings on the wire and this time two Common with the three Spotless Starlings.

As I took the last stretch towards the motorway underpass where I can always guarantee to find the local House Sparrows, as on this occasion, I also found my first Stonechat of the day on the far side of the river.

Once under the motorway and at the Experimental Station a couple of Hoopoe flew across the road in front of me and the adjacent grassy area produced the expected White Wagtails along with a further three Common Starlings in the bare trees at the back.  The bushes to the hidden reservoir side produced the first of the morning's Chiffchaffs whilst, above, the early morning Mediterranean along with a smaller number of Lesser Black-backed Gulls were making their way to the shore.

On down to the ford across the track and take the usual hop, step and a jump across the narrowest part of the stream where I found both more House Sparrows and Black Redstarts.  Walking back, after re-crossing the stream, also a female Chaffinch followed by a handful of Goldfinches and a single Serin.

A good way to end the day as I had three more Stonechats in this area before taking the detour past the local sewage works where a further six Cattle Egrets were in residence.  And, just before crossing the weir back to the main track, movement in a large well-leaved tree attracted my attention and pleased to discover a male Blackcap.  Finally, back at the tall bare tree on the opposite side of the river near the enclosed picnic area, there were still eight Wood Pigeon but they had now been joined not just with more Spotless Starlings and Goldfinches but also a single hunkered-down Kestrel.  You can hide but I can still (occasionally) find you! 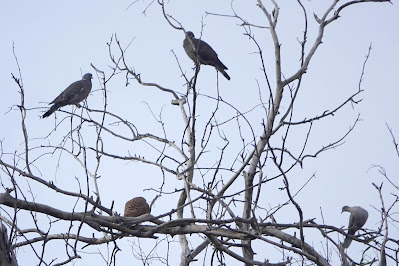