Bumper Morning at the Rio Algarrobo

The rains had cleared and the sun was shining as the day started to warm up.  Now a steady flowing river that brought a "best ever" visit to the river, albeit relatively few birds in total.  Past experience this winter has suggested that there are probably about 32 species that I might expect to see on my walks at this time of the year, including that once only Wryneck at the beginning of last December, and today I managed to actually record 28 of these species.  Now that is something to put a smile on one's face. Perhaps before the end of the month I will catch up on the Green Sandpiper, Kestrel and Linnet.

Entering the play area at the start of the walk immediately a number of Collared Doves quickly followed by a handful of screaming Monk Parakeets.  A Blackbird was foraging away at the edge of the path and so I continued on to the open trees.   A handful of Spotless Starlings were feeding on the grass to my right and approaching the old, bare tree on the left I could see that just the one Wood Pigeon this morning along with a Collared Dove and short-visiting Spotless Starling.

Passing the enclosed barbecue area a few Chiffchaff in the trees to my left and a number of overflying Goldfinches.  Stopping to check more closely the single bird atop the tree a little in front of me I was delighted to identify the female Crossbill, most unexpected.

So up towards the football field with more Blackbirds, the first of the morning's White Wagtails and a delightful mixed bag on the wires away to my left near the sewage works which held a Common Starling along with Collared Dove and three Monk Parakeets.  As ever, this was also where I found my first House Sparrows.  Meanwhile, the Mediterranean Gulls above were making their way towards the sea and, on closer inspection, accompanied by a handful of Black-headed Gulls.  A Greenfinch made a hurried departure and I took note of the Stonechat that arrived on the far bank of the river.

Very little to see on the grassy field next to the Experimental Station and the gulls were still departing the hidden reservoir but this time also a few Lesser Black-backed Gulls.  Towards the far end a single Serin on a tree top and then, looking through the fence to the garden area, a male Sardinian Warbler in a low bush.

The river water levels were now higher than yesterday so crossing the ford there was obviously more emphasis on the jump rather than the previous hops and skips.  Very little to see in this are but movement at the base of a thick bush eventually revealed a male Blackcap.  So back across the ford and the start of the return journey.  At last, my first Black Redstarts of the day with both a male and female and even a lone Meadow Pipit alighted on a nearby bush to preen itself having completed its morning ablutions. 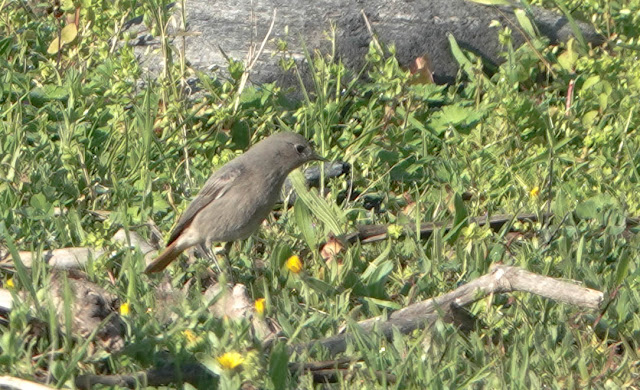 Approaching the hidden reservoir I was suddenly aware that the Crag Martins had returned, or at least now showing themselves, and so on via the riverside towards the motorway underpass.  My walk put up a pair of Hoopoe and then a few more Serins before checking out the Experimental Station once more.  The gates safely closed and locked so no interruptions probably resulted in my getting the fleeting glimpse of the Robin that waked across the drive just inside the gates accompanied by a couple more Blackbirds.

So on towards the ford for my usual deviation to take in the sewage works.  On the grass to the right of me and fairly close to the water itself a quartet of Meadow Pipits were busy feeding and this time in shorter grass.  A little more water now flowing over the road but still, thankfully, not a problem for my trainers.  Once at the sewage works just the two Cattle Egrets in their usual position and crossing the weir to regain the main track I was fortunate enough, on looking upstream, to catch sight of the feeding Grey Wagtail working its way in the same direction.  A complete morning, or so I thought.  Stopping to check out the green area below me to my right passing by the enclosed barbecue area I could not but fail to hear the loudly singing Great Tit.  Well concealed in the top of the tree but eventually found. 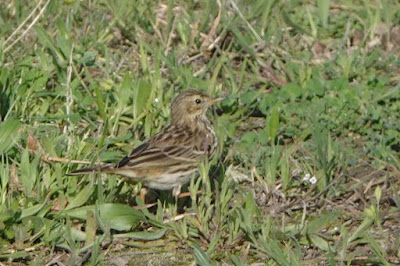 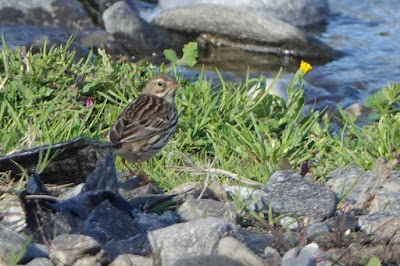 Check out the accompanying website at http://www.birdingaxarquia.weebly.com for the latest sightings, photographs and additional information
Posted by Bob Wright - The Axarquia Birder at 08:35