Off to my friend Derek Etherton midday to join him on a leisurely drive down to Tarifa on the Andalucian coastline of the Strait of Gibraltar.  On the way we collected fellow friend Jerry Laycock from Fuengirola before heading to our final destination at Alcala de los Gazules in preparation for a pelagic bird watching day out of Rota near Cadiz city on the morrow.  A few White Storks seen standing on old nests as we approached Algeciras and the on towards Tarifa wherewe passes a fhandful of Black Kites and a Booted Eagle before finally arriving at the entrance to the La Janda entrance track.  Time for a leisurely drive through the site before continuing on to our Alcala.

A Woodchat Shrike was sitting n the fence as we entered and driving down the track to the canal we added a couple of Zitting Cisticola.  Once at the bottom time to stop and check out the area where we soon found at least three Montagu's Harries quartering the nearby fields.  A couple of White Storks passed over and more were noticed in the distance.

Similarly,  a couple of very large charms of Goldfinch before continuing on the down the track where we also observed both Black Kite and Marsh Harrier.  Some of the riverside trees seemed to be alive with a mixture of House and Spanish Sparrows along with a number of Spotless Starlings and, of course, the regular sightings of Barn Swallow.  A Buzzard was seen rising on a thermal.  A Little Egret came to alight in the ditch and Herons were seen on both sides of the track.

Over the bridge and proceeding through the avenue, having seen both Turtle Doves and a Lesser Black-backed Gull, where many more Goldfinch before we had sightings of three Black-shouldered Kites. Also present were a score or more Wood Pigeon.  Once beyond the avenue, sightings of many Lesser Kestrels along with the occasional Common Kestrel.  Approaching the "smelly farm" we stopped to spend some time observing, and photographing, the sleeping Red-necked Nightjar under a small tree and very well camouflaged amongst the surrounding dead leaves. 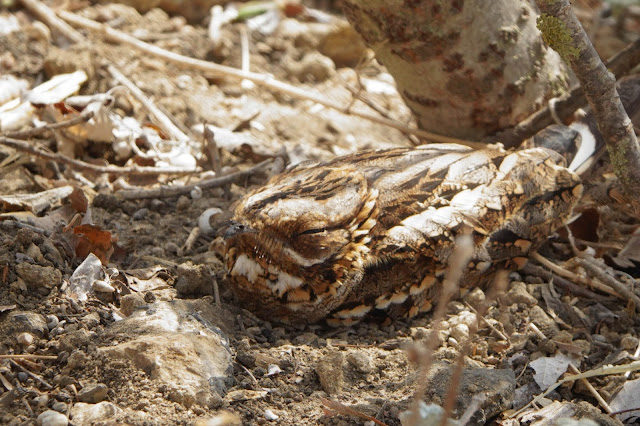 On up past the farm noting the large number of both Jackdaws and Rock Doves, not to mention a handful of Pheasants, before a second pair of Turtle Doves along with a couple of Collared Doves were recorded.  Ere long we had reached the end of the track and turned left to make a stop to check out the water on the left.  A couple of Mallard seen and on the fence to the right both Linnet and a pair of Corn Bunting.

The flooded field to the the right seemed to have gained more water from my visit a week ago and the Glossy Ibis flock was now down to about forty.  A Blue-headed Wagtail was seen along with a Green Sandpiper.  Closer scrutiny revealed a three Snipe on the far side below the path.  A few Cattle Egret were also noted feeding near the cattle themselves as we approached the above flooded field.  .A couple of Red-rumped Swallows flew over the area and, finally, a Booted Eagle crossed above us and a Hoopoe dashed for cover as we left the site and headed on to Alcala.

Check out the accompanying website at http://www.birdingaxarquia.weebly.com for the latest sightings, photographs and additional information
Posted by Bob Wright - The Axarquia Birder at 22:03