The big palegic day.  But this report will come a little later once I have received an email from "Birding the Strait" updating birds seen, etc.  meanwhile, the journey form Alcala to Rota produced Cattle Egret, Hoopoe, Magpie and Collared Dove,  No shortage of Barn Swallows about and, having completed our trip out into the Atlantic there was time to call in at the the large lake at Medina-Sidonia. 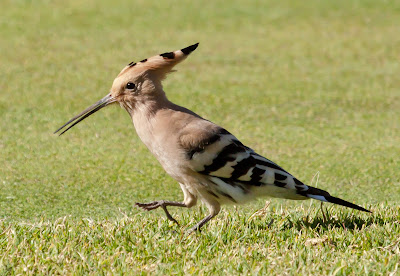 I say "large lake" but upon arrival we found just about all the water had evaporated away leaving a small, distant shallow amount of water which, in turn produced a couple of both Flamingo and Black-winged Stilt.  However, it was rather pleasing to be greeted by a departing Stone Curlew.

So on back to our base in Acala where there were numerous House Sparrows and Spotless Starlings.  However, it was whilst sitting on the roof terrace just after dark and "chewing the fat" that we heard then saw a Little Owl in the tree on the opposite side of the road.  Things got even better when a Barn Owl drifted by at head height and disappeared round the corner.

Posted by Bob Wright - The Axarquia Birder at 22:03