The sun was shining despite the forecasted rain so up out of bed with a view to nipping over to my local patch at Rutland Water.  However, no sooner have I sorted breakfast than I noticed that, outside, it is pouring with rain.  Forget birding; spend time on the computer in the studio.  But then , hours later, I became aware that the room seemed brighter and looked out to discover that the shies had almost cleared.  No brainer really; quick coffee, make a take-out sandwich and off to Rutland Water just after midday.

Greeted by Wood Pigeons and Jackdaws and straight to the Visitors Centre to purchase my ticket and check on recent sightings.  No sooner had a Smew on Lagoon 1 been mentioned than I saw said bird drift past the large window overlooking the lagoon in the company of a few Tufted Duck.  Also present Teal, Gadwall, Shoveler and Mallard.  A pair of Mute Swans on the opposite side of the water but, almost in front of me, a pair of adult Bewick Swans with three well-grown cygnets.   Whereas there were hundreds, if not thousands, of Lapwing present I was more pleased to see the good number of Pintail.  The small flock of Canada Geese were well to the back of the immediate area.

Leaving the Wigeon and Cormorants I made my way directly to Lagoon 4, passing a pair of Great Spotted Woodpecker, before the rain arrived as the clear skies had now been replaced with some menacing-looking cloud.  Virtually nothing on this water other than a distant Great Black-backed and a few Black-headed Gulls so on to the Buzzard Hide overlooking Lagoon 3.  More Teal, Wigeon and Cormorants but also over two dozen Moorhen grazing the neighbouring field as I approached the hide.  Crows behind me and on the water both a single Heron and a couple of Great White Egrets along with Teal and Wigeon.   Relatively few birds but I did also see more Tufted Duck and a couple of Great Crested Grebe.

Next up was the Smew Hide overlooking the northern end of Lagoon 2 and here closer views of the wintering Goldeneye along with many more Wigeon, Mallard and Teal.  Even  couple of Coot and a cock Pheasant wandered past.  I then moved round to the Osprey Hide to get a better view of the Goldeneye and the Grebe Hide produced more Great Crested Grebe and Tufted Duck along with another sighting of the Smew.  To my left I could just pick out the feeding pair of Shelduck.  Even a solitary Chiffchaff flew into the grasses immediately in front of the hide to undertake a little foraging. 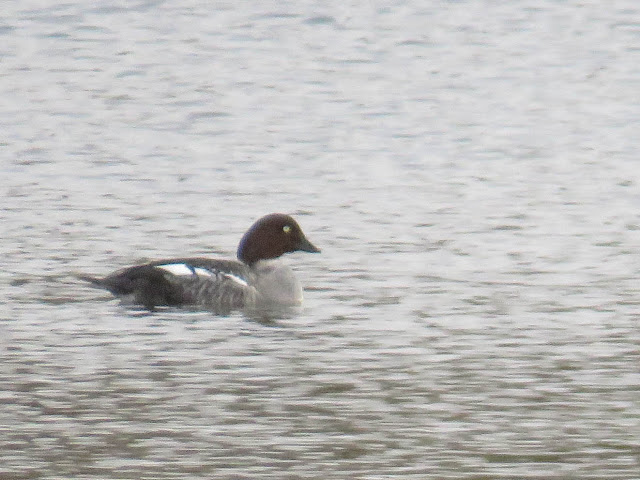 A very small flock of feeding House Sparrows were seen near the Badger Hide and then, from the Visitors centre, I picked up one of the two male Stonechat currently in residence.  Finally to the feeding Station to gather in all the LBJs.  But where they?  Just on 3pm and the light was already disappearing so only a single Great Tit recorded; no finches or Blue Tits.  Then, without a sound, a male Sparrowhawk swept in the area, briefly perched on top of a feeding support pole and departed straight ahead with out so much as a whisper.  Come and gone quicker than Mercedes can change four wheels during a Grand Pix race!  Good job I just happened to be looking at the empty feeder when the bird alighted but no chance of a photograph.   So, in the end, an enjoyable couple of hours.


Check out the accompanying website at http://www.birdingaxarquia.weebly.com for the latest sightings, photographs and additional information
Posted by Bob Wright - The Axarquia Birder at 08:18