Not brilliantly early but still down at the local Rio Velez just west of Torre del Mar by 8.50 on a clear sunny day with the low, rising sun making it difficult to see as I walked towards the beach and, especially, if I tried looking at the fields to my left.  A single White Wagtail as I parked my car at the top of the track just after the underpass to the N340 then a quick look in the river, which at least now contained a water supply, where I immediately recoded a handful of Moorhen and up to dozen or more Mallard.  A few metres on and I noticed a single Greylag Goose accompanied by a very white goose (one trying to escape the Christmas invitation!) then the first of a couple of Blackbirds seen during the next hour or so.


Then it was off down to the hide which, once again, had been polluted on the seat by some ignorant so-and-so, where I eventually found a couple of House Sparrows.  Just one Starking on top of the adjacent pylon but  took the trouble to raise my bins and was delighted to discover that it was in fact a visiting Common Starling.  The river from the bridge to here had bee very full and much of the debris brought down from the farmland higher up was now piled up at the edges but the, now, exposed mud brought no sightings other than more Mallards.

The walk to the beach and back was very quiet with the river having broken though and taken a parallel channel to the east so making access to the mouth impossible.  On the beach just the single Black-headed Gull so back to the hide recording a Great Tit and the first of a few Chiffchaffs on the way.  A single Hoopoe was on the path behind the pumping station and at that moment a score of Monk Parakeets screamed over from the east and disappeared over to the other side of the river.

Walking back to the car more House Sparrows feeding on the freshly ploughed fields along with both White Wagtails and a couple of Black Restarts and a female Stonechat.  To my left I picked up a pair of Coot with the Mallard and then, at the car, a score or more of Goldfinches accompanied a few Serins feeding on the grass seeds.  Not just the handful of Collared Doves but also the resident Rock Doves were noted.

At this point I drove under both road bridges but nothing extra seen until I reached the growing fields beyond the chimney factory.  First Crested Larks then another Hoopoe before a number of White Wagtails on what was left of the previous muck heap.  A dozen Spotless Starling flew overhead as I made my way to the track alongside the river.  Now I really did find some birds.  A few Goldfinches and Serin but mainly Chiffchaff feeding on the rotting fruit and vegetables left on the track. 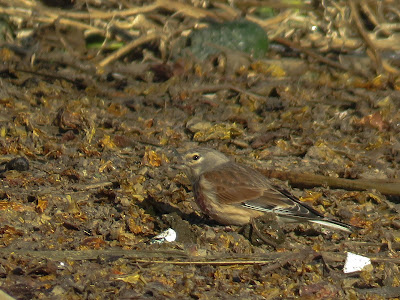 Meanwhile, down at the river itself, eleven Sanderling were feeding and a single Green Sandpiper took its leave.

leaving the area I drove back to the main road and then made a clockwise circuit of the growing fields west of the Rio Velez.  More Crested Larks then a pair of Robin on the fence before spotting the resting Kestrel on top of a distant pylon.  A couple of Cattle Egret were following the small tractor ploughing a field and then, judging where best to cross the flooded are near the beach, I noticed yet another Sanderling along with a trio of Little Ringed Plover foraging along the water's edge to take the morning's sightings up to 28 species.


Check out the accompanying website at http://www.birdingaxarquia.weebly.com for the latest sightings, photographs and additional information

Posted by Bob Wright - The Axarquia Birder at 00:49