Just received a report form my great friend Derek Etherton on his two days down in la Janda/Barbate as mentioned yesterday.  It certainly sounds as if they all some excellent birding.  Meanwhile, outside it is absolutely chucking it down as we prepare to depart for east Midlands Airport where at least it should be dry and sunny for the next few days and so help us to recover!

Just enjoyed 2 super days in Barbate & La Janda, accompanied by great friends Barbara Anne Laycock & Jerry. Target birds were Red-breasted Merganser, Sociable Lapwing, Short-eared Owl, and maybe the Bittern again (we had it for this years list back in February). The weather for mid-December was amazing, no wind a temperature rising to 26c on both days.

First of all at Barbate it took 10 minutes to locate the Merganser (not a common bird this far south) and a further hour trying for photos! Moving on to La Janda my job (Derek) was to locate 1 of the 3 Sociable Lapwings that have been recorded here for the 2 Barbara's and Jerry had not seen the bird. Scanning the field mid-way between the bend and the farmhouse eventually found the juvenile bird along with hundreds of Common Lapwing and Snipe. Moving to the end of the track to look for the Bittern (same area as earlier in the year) we 'dipped' however a Black-winged Kite put on a super hunting display until rudely interrupted by a passing Sparrowhawk. It seemed all the raptors were in an argumentative mood as a Common Kestrel took a dislike to a resting Peregrine a little earlier.

We stayed overnight on the coast near Tarifa ready for an early start in the morning, the intention being to start down the bottom end looking again for the Bittern. No luck with that and no luck also with an adult Soc. Lapwing. However, whilst watching 3, yes 3, Black-winged Kites the Pallid Harrier flew right alongside our car!

Moving along to the Short-eared Owl area we first of all lunched, then left the car to walk the road hoping to find the bird - too successful! We spooked it and just watch it fly off and sit around the back of a tree out of sight. However, we were rewarded firstly by a Bonelli's and immediately 2 (displaying) Spanish Imperial Eagles. I was lucky enough to 'scope the birds, Jerry lucky to get a couple of great photos. We kept travelling the road to Benalup (wow! It's not potholed any more!) observing the usually vast quantities of White Storks, etc. A brilliant 2 days that so much was packed into - thanks for your company B & J! 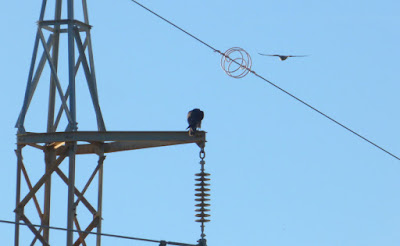 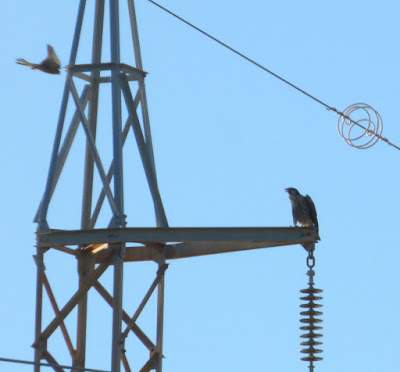 All photographs taken by Derek Etherton

Great report Derek and some fabulous birds seen.  Many thanks for sharing your visit with our readers.


Check out the accompanying website at http://www.birdingaxarquia.weebly.com for the latest sightings, photographs and additional information
Posted by Bob Wright - The Axarquia Birder at 02:10