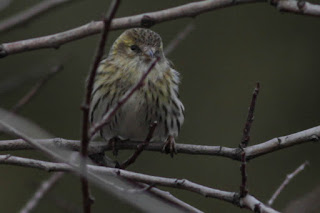 Off after breakfast to visit Mick and Jayne Richardson at their Loja hoe and so pleased to see how well both were looking, especially Jayne following her recent treatment.  Outside the house at least a score or more Siskins hanging (literally) around the garden along with both Black Redstart and Blackbird.  Next door a Tree Sparrow among the local House Sparrow sharing the same "Siskin tree."  A good start to the morning as approaching the motorway exit, despite the cold and mist, we had a damp-looking Buzzard resting on the wires and encountered both Rock and Collared Doves. 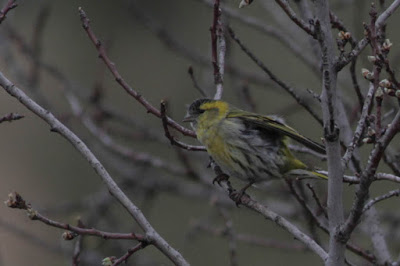 Leaving Mick and Jayne we drove down to the local river, passing Spotless Starlings and Goldfinches, and crossed by the ford where we encountered our first Meadow Pipit and a number of White Wagtails and Chiffchaff foraging at the water's edge.

A Hoopoe put in a brief appearance and then we found a single Little Egret in the distant water.  A number of Blackbirds seemed to be actively criss-crossing the river and a pair of Serin were feeding on the bank near the main bend in the road.   Below a Green Sandpiper was busy feeding and a short walk down the riverside track from the bend found a small flock of about a dozen Azure-winged Magpies.  Before moving on we also added a Stonechat, Crested Lark and a couple of Chaffinch.


Taking the Salar exit from the motorway to drive towards Alhama de Granada we found a Wood Pigeon then a small flock of Linnets on the wires.  Next up was a pair of Mistle Thrushe and then the old, badly damaged road down to Ventas de Zafarraya.  No sooner round the corner and came across a number of feeding Chaffinches followed by a handful of what looked like diminutive Mistle Thrush.  A stop and check with the bins confirmed the same.  The trees opposite produced a Great Tit and then at least twenty Corn Bunting.  Continuing on down we also recorded both Dartford and Sardinian Warbler along with more Chiffchaffs.


At the bottom of the hill we eventually found a total of five (Common) Magpies and at the arable fields first a pair of Crested Lark and on the opposite side of the road a small flock of about twenty Calandra Lark.  Always the same, when you have already seen Azure-winged Magpies more turn up as you drive through the "Magpie Wood" but, nevertheless, lovely to see.


Check out the accompanying website at http://www.birdingaxarquia.weebly.com for the latest sightings, photographs  and additional information
Posted by Bob Wright - The Axarquia Birder at 09:49