One of the longest journeys to date as seven of us from the Axarquia Bird Group met just after 9.30 near the bridge below the filthy plastic re-cycling plant at Las Norias in Almeria province.  Olly had travelled from nearby Roquetas de Mar and John and Jenny had already come up to Cabo de Gata from Salar so were within an hour of the venue,  Meanwhile, I brought Bob and Noreen Ashford, our Australian birding visitors currently staying in Los Romanes and Dutch birder Lisette who still has a week left on Caleta.  Entering the village we were greeted by Spotless Starling, Rock and Collared Dove and were soon in the presence of very many Cormorant which could be seen from the car as we approached the meeting point.  By the time I had started this blog I had already received a report on same for John so will try and combine his words with mine; many thanks John.

The small end area of water produced Mallard, Red-crested Pochard and Little Egret with scores of feeding Crag Martins overhead.  Ere long we had also added House Sparrow, Heron and both Little and Great Crested Grebes.  At this stage gulls were mainly Lesser Black-backs and, of course, there were lots of Chiffchaffs in the surrounding shrubbery.  Similarly add on Gadwall, Moorhen and Shoveler.


Across the road a Kingfisher was noted as were several more of the same species before mentioned. Notable absentees were the Night Herons usually in good numbers here.  We walked down to the X-roads and on the pool on the left we saw Green Sandpipers, Little Stint, Dunlin, a single Sand Martin passed overhead, Common Magpie, Sanderlings, Snipe and yet more gulls and Crag Martins.  Access to the normal stopping areas for birding have been chained or blocked off in some way so we headed for Roquetas de Mar.

Here Ollie led us to a new area around the back of the lagoons where we spotted female Marsh Harriers, Common Kestrel, Purple Swamphens, Common Coots, Avocets and Slender-billed Gulls.  He then moved us along to another area where the roads  - in places were quite flooded - here we parked up and looked over sea and spotted two Gannets.  On the pool to our rear, a sight of some 92 Golden Plovers resting and not even moving when three Spanish low flying aircraft came over - the Greater Flamingos did a slight lift-off though.
Also about here we saw Dunlin, Little Stint, Redshank, Black-winged Stilts and Snipe.  A long-distant raptor sitting in a bare tree, was not ID´d before we left.  A Common Kestrel was noted on a telegraph pole devouring its newly caught prey.

Onto the main entrance area of the Roquetas where we saw masses of Shovelers and Black-headed Gulls, Yellow-legged Gulls, Common Coots, one male White-headed Duck, Mallard, Shelduck, Auduoin´s Gull and Cormorants.  As we started off to leave the area several Pintails were spotted with a final count of almost sixty birds, not to mention the five Wigeon sen at the same place.

At KM2  enroute to Cabo de Gata we pulled off to look for Dotterel, no luck here, but our Australian guest (Bob) did spot a Peregrine Falcon sitting in the field - possibly and answer to why no Dotterels, a small flock of Meadow Pipits were also logged here.


A really good days count, if not quantity (although we managed 60 secies), we had quality and were certainly ready to book into the local hotel and recover for the following day's birding, but not before four of us had made an exploratory trip down to the lighthouse in the hope that we might see a Trumpeter Finch as had been seen by John and jenny yesterday.  We did not but we did record a first Barn Swallow of the year, Black Wheatear and a couple of Goldfinch. 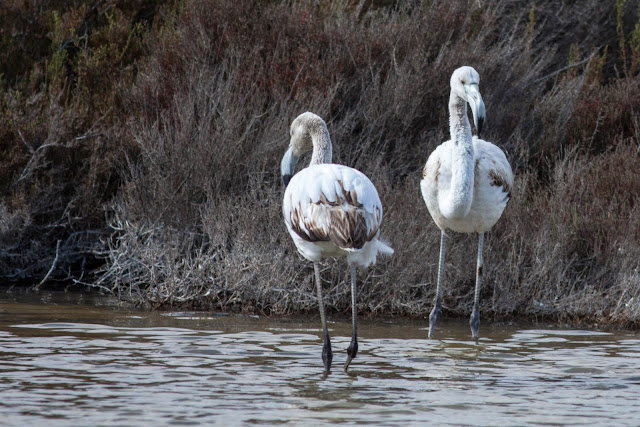 
Check out the accompanying website at http://www.birdingaxarquia.weebly.com for the latest sightings, photographs  and additional information
Posted by Bob Wright - The Axarquia Birder at 12:38