Another hot and cloud-free day so away as early as possible to drive over to the Monfrague National Park followed by a visit to the Arrocampo reservoir and finally back to the hostal for a well-earned sleep. A great day even if the wrong time of the year for birding (heat and dry) but at least I managed to find all my targeted birds. 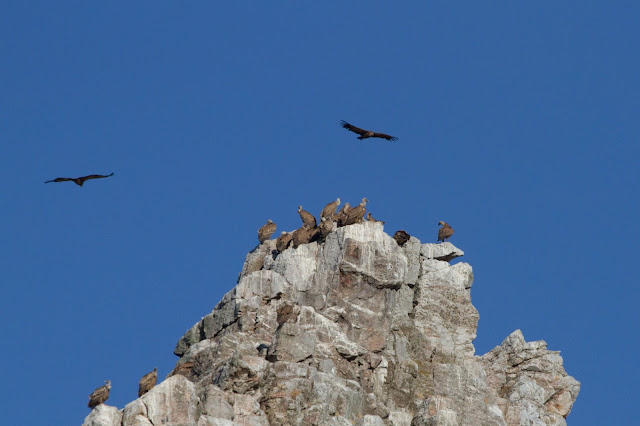 Leaving as soon as possible and before breakfast to try and get to Monfrague before the temperatures once more reached the upper thirties and beyond, I had regular sightings of Magpie, Buzzard and Barn Swallows on the journey.  A raven crossing the road was a welcome sighting as the first of a couple of Black Kites.  A stop for breakfast at El Rubio provided the sight of mass House Martins at their colony.  Next up was a Hoopoe disappearing off into the dehesa and apart from Collared Doves I actually came across a single Turtle Dove sunning itself on a telephone wire. At the long, low bridge approaching the destination there were scores of House Martins feeding over the now virtually dry river bed but, at a small pool on the far side of the road a single Black Stork took its leave as I looked over the parapet.  In addition to the House Martins, I recorded the occasional Red-rumped Swallow and even a couple of Alpine Swifts.  Finally, a few Crested Larks, the first Azure-winged Magpies of the day and a number of isolated Woodchat Shrikes before reaching my first port of call.

At the Salto del Gitano on the bend of the Rio Tajo the resident Griffon Vultures were warming nicely in the rising temperature and starting to take to the skies.  Scores of vultures either soaring around or still resting on the rocks of the gorge opposite the viewing station.  In addition, many Crag Martins and a few Barn Swallows.

Following the river down to the mirador overlooking its tributary on the Rio Tietar at La Tajadilla I finally found my Egyptian Vultures along with more Griffons and a smaller number of Black (Monk) Vultures.  The wrong time of the year to make a specific visit to the area but very rewarding as I was (almost) passing on my home from the UK to Malaga.  Also seen in the area many Southern Grey Shrikes along with Booted eagle, more Black Kites and a Buzzard.  No Lesser Kestrels seen on the bullring roof at Trujillo but they were out here feeding over the harvested corn fields. 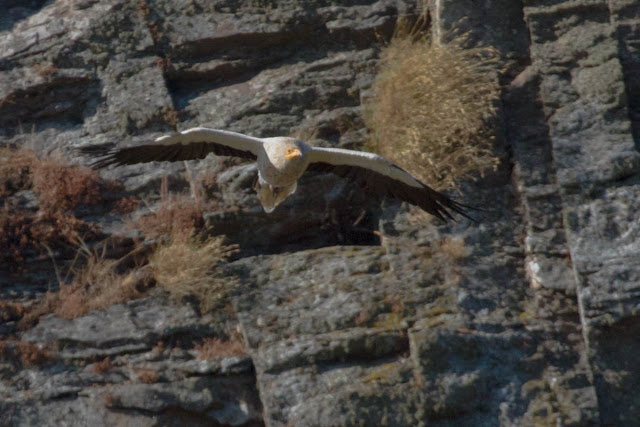 Continuing through the Monfrague park to the end I took the motorway to the relatively nearby Arrocampo embalsa with its warm water as it helps cool the local nuclear-powered electricity station. Not the numbers of birds that you would expect earlier in the year but upon arriving a couple of Purple Herons flew over the reed bed and a male Hen Harrier, yes Hen Harrier, was seen.  The nearby hides, all locked shut but some height available on the entrance bridges leading up the individual hides, produced the sight of a trio of Great White Egrets and then on the distant water many Cormorants, a pair of Great Crested Grebes, Coots, and a couple of Little Egrets.  But very few Mallards to be seen.

A drive around the neighbouring area to the distant hides proved very rewarding with yet another very close but apparently either injure or trapped Great White Egret and later a number of Cattle Egrets and on the edge of a small pond the first Green Sandpiper then Common Sandpipers along with a pair of Little Ringed Plover and a White Wagtail.


Finally, it was the drive back to Trujillo through the country lanes and dehesas which duly produced a Northern Wheatear, Bee-eaters and, surprise of surprises, a Zitting Cisticola which hopped up out of the long grass onto the nearby fence as I reversed the car.  And remained in situ to enable photos to be taken.  A Short-toed Eagle did everything close by to frustrate me in trying to capture a shot as the traffic roared past on the adjacent motorway and finally, both a White Stork and a couple of Jackdaws over the town as I took a walk to find a suitable restaurant.

The drive back to Mezquitilla the following morning was without incident as I spent three hours on country roads but always with the low sun in my eyes so making bird identification of those perched on the wires almost impossible.  But the main bird was certainly more Southern Grey Shrikes.  Rounding a dip in the road and impossible to stop the car I did, however, also capture a male Montagu's Harrier and the only other additions to the previous day were a number of Goldfinches and a Common Swift.

Check out the accompanying website at http://www.birdingaxarquia.weebly.com for the latest sightings, photographs and additional information.
Posted by Bob Wright - The Axarquia Birder at 03:54