A windy, cloudy start to the day and with time running out before my return to Spain time to make another visit to Rutland Water, perhaps the last on this visit as we are off to the grand-daughter's wedding in the north of England this Friday and next week I hope to undertake my final birding trip of this stay with a visit to Eyebrook Reservoir.  The occasional break in the cloud let through a very warm sun and, as always, no sooner had I returned home in the mid-afternoon than all cleared up to give a very warm and sunny end to the day!  But at least I managed to find my expected minimum fifty species during the visit.


As I drove alongside the reservoir and past Empingham a large flock of Rooks feeding on the recently harvested corn field and soon also both Carrion Crows and the usual hordes of Wood Pigeons.  Naturally, I was greeted in the car park by the resident Jackdaws and a first stop at the feeding station produced both a Collared Dove and Moorhen along with numerous juvenile Blue and Great Tits accompanied by a smaller number of moulting adults and a couple of House Sparrows.  A rather forlorn Dunnock appeared out of the undergrowth and then the first of a few juvenile Robins along the track accompanied by the occasional, also moulting, adult.

Whilst purchasing my day pass I took a look at Lagoon 1 and recorded numerous Cormorants and Coots along with Mallards, a pair of Mute Swans, the large flocks were out on the North Arm, a single Common Tern and loads of both Canada and Greylag Geese.  Indeed, there were large gatherings of both, and especially the Canada, on most of the waters, especially those to the south.  Just the one Heron and a smaller than usual number of Lapwings.

Then it was off southwards to the Snipe Hide in search of waders.  On arrival not a single bird to be seen but a little wait did produce one Wood Pigeon!  left this hide to move over the Harrier Hide where, at least, I had a better view of Lagoon 1 and duly recorded more Mallards, Teal and Tufted Duck along with a quartet of Mute Swans and many more Coot.  Also in the area a few Little Egrets and more Lapwings but all this changed when a Great White Egret dropped in immediately in front of me to feed on the isolated pool. 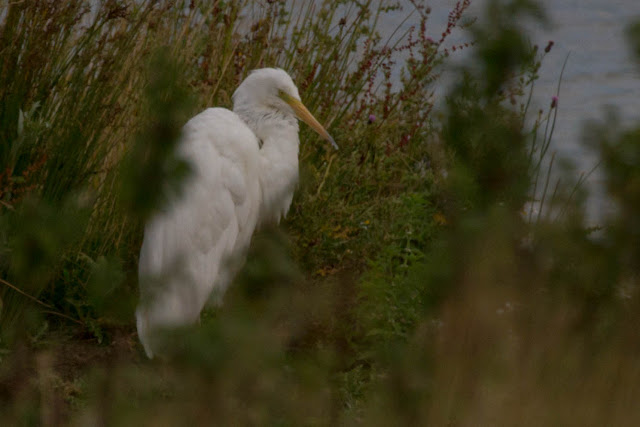 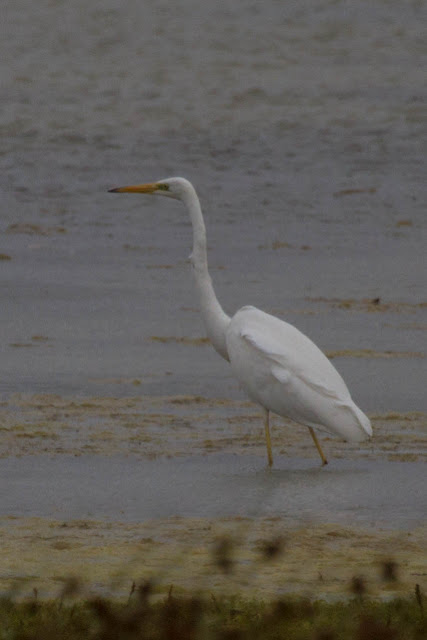 Leaving the hide I made my way over to Lagoon 6 where, from the Tern Hide, I not only recorded both the above geese, Lapwings and Mallards but also two more Great White Egrets.  Obviously, at least three on site at the present time.  A small number of Common Starlings flew over and then a Great Crested Grebe with youngster worked its way across the water where I also picked up my first Green Sandpiper of the morning.  Just the one Barn Swallow and a handful of Sand Martin were feeding over the water.

Approaching the 360 Hide I looked over Lagoon 8 and noticed the single Egyptian Goose and once settled inside was able to find a resting party of about thirty Black-headed Gulls and a single Herring Gull resting immediately opposite.  Many more geese to be seen on this lagoon along with both Coots and Mallards.

Back to the feeding station on my way to the car park for a light snack before heading the the northern hides.  In addition to the previously seen birds I was also able to add both Blackbird and a number of Chaffinches. 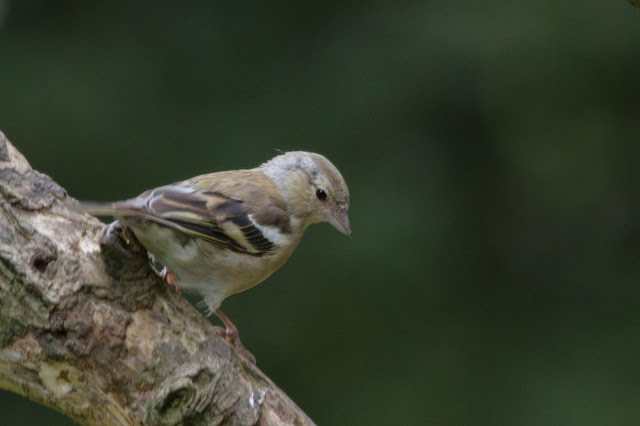 The first hide to offer something new was the recently replaced Osprey Hide which had a Marsh Harrier drift by hassled by a Lapwing and a Little Grebe immediately below me.  Then it was on to Lagoon 4 and the well-loved Sandpiper Hide. 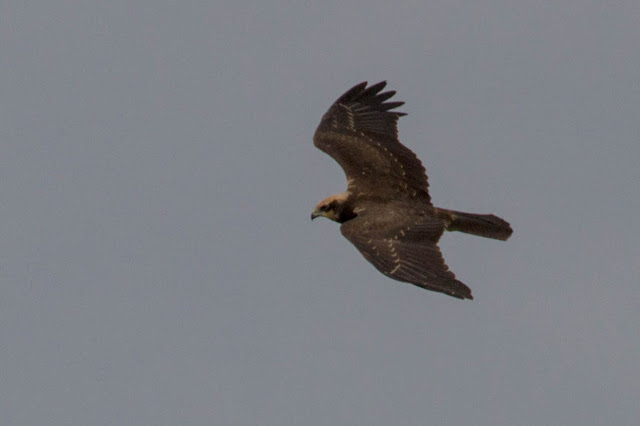 Better weather conditions outside (and within as a little more warmth arrived) and many more Canada and Greylag Geese to be seen along with large resting flocks of both Black-headed Gulls and Common Terns.  A close Great Crested Grebe and at the far side an Osprey had landed in the shallow waters to bathe. Wrong-way round as the Osprey was in the water and a single Egyptian Goose was sat in its nest on the pole!  First a handful of Dunlin and, using the scope, I managed to find a Ringed Plover and the known Little Stint.  A little later on I also managed to find a pair of juvenile Little Ringed Plovers and mid-water a well-grown juvenile Shelduck.  A single Pied Wagtail was recorded and lots of feeding Sand Martins over the water.

Finally it was over to nearby Lagoon 3, passing a Kestrel on the way, and the Shoveler Hide where we found the large flock of Egyptian Geese and many ducks including, mainly, mallards and Gadwall but also Tufted Duck and a Wigeon.  Most exciting of all the Marsh Harrier returned and spent some time quartering this end of the reserve and giving very good views to the four of us in the hide.  Also present were at least six Green Sandpipers and a couple of juvenile Shelducks along with a few Great Crested Grebes and more Mute Swans with their respective signet families.  A lone Great Black-backed Gull landed close by unlike those on Lagoon 4 which were very distant.

Nothing further to add other than a Magpie as I made my way back to the Visitors Centre past all the newly-erected marquees in preparation for next week's annual British Bird Fair.


Check out the accompanying website at http://www.birdingaxarquia.weebly.com for the latest sightings, photographs and additional information.
Posted by Bob Wright - The Axarquia Birder at 02:32