Weather promised to be not too good today, mainly cloudy and the chance of a light shower after 2 o'clock.  How exact can you be?  As the label says and a few spots at 2.25 so made our way back to the RSPB Frampton MarshVisitors Centre to ensure that optics, and self, stayed dry.  But not before friend Chris Bell and I had had a most enjoyable and rewarding stay of over five and a half hours.  Approaching Frampton village I encountered a large flock of Rooks plus the resident Wood Pigeons along with a pair of Collared Doves.  Then, within metres of the site, lovely to come across a pair of Turtle Doves picking up grit from the narrow country lane.  I must admit, my first British Turtle Doves for many a year.  So, having dropped the ladies off at Stamford bus station so that they could have a day in London visiting Buckingham Palace to see the Queen's frocks, I was on site just before 9 am and proceeded to the 360 hide where Chris was awaiting my arrival.  It was not until we were preparing to return to the car park that I discovered that Chris had travelled down to Boston from Worksop by train and then a taxi to Frampton Marsh.  Therefore, I drove Chris back to Sleaford on my return journey where we proceeded to collect Kestrel, Jackdaw and House Sparrow before I finally got back to Stamford and able to confirm that we had recorded over 50 species for the day.

Tree Sparrows and Blackbird note as I passed the still closed Visitors Centre, it was after all only 8.50, on my way to met Chris at the 360 Hide but I decided to make a very short detour to look in at the Reedbed Hide.  Lots of Reed Warblers to be seen on the way but relatively little visible from the hide.  A handful of Avocet, including a family of youngsters, and a couple of Barn swallows overhead. A single Ringed Plover put in an appearance and just a couple of Black-tailed Godwits along with the odd Lapwing and Mallard. 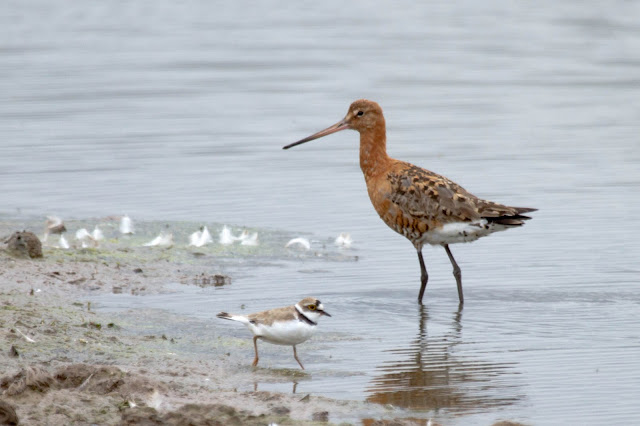 So, with little to see I crossed over the 360 Hide, noting a family of Goldfinches on the way, and met up with Chris.  What a difference a change of pool and an hundred yards can make!  The waters were alive with waders, almost in every direction.  Hundreds of Black-tailed Godwits and Dunlins but try as we did we were unable to locate the currently-visiting White-rumped Sandpiper that was till about and had been found with the Dunlin less than thirty minutes before. 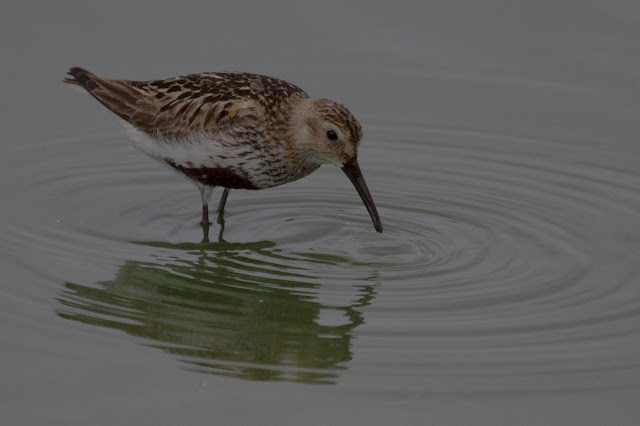 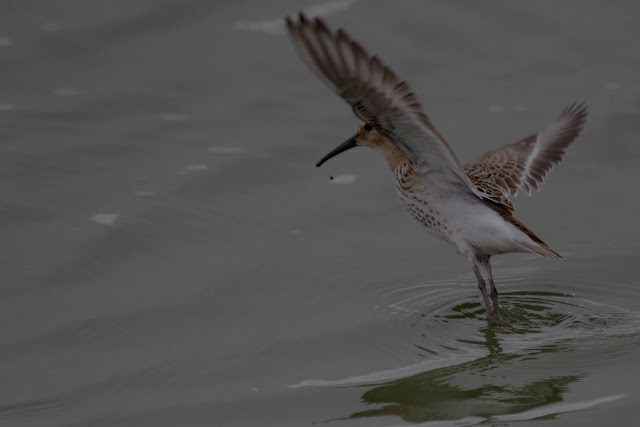 What to check out next as we moved from one view to the other during our long stay at this magnificent hide.  We eventually found both Greenshank and Curlew Sandpiper plus Pied Wagtail and scores of Avocet.  Eventually I locked on tot  a Ruff and no sooner seen than I must have at least another dozen.  Meanwhile, of the larger birds there were a number of Cormorants and Mute Swans along with both Canada and Greylag Geese.  A single Common Tern made a brief fishing visit to join the small number of Black-headed Gulls.  But from this hide only Mallards of the duck family were recorded until just before departure for a coffee back at the Visitors Centre I found a handful of Teal away to the right.  But I forget, there was a score or more of Shelduck, mainly well-grown youngsters of the year.  Along with a single Heron there must have been a total of somewhere in the region of two score or more Little Egrets about the reserve.  A rather special sighting was that of a Spotted Redshank at the far end of the pool near the distant East Hide busily feeding in the company of another Curlew Sandpiper. 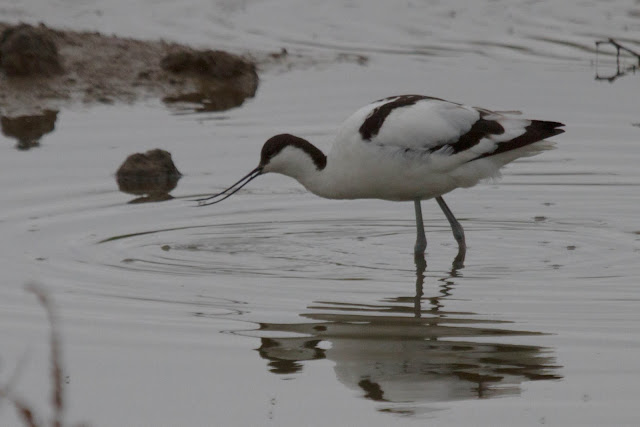 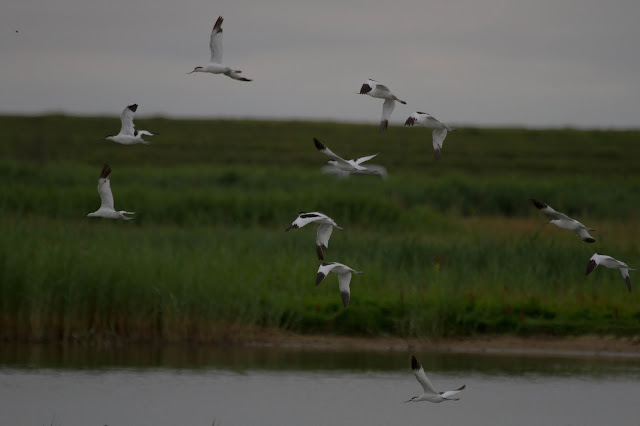 Working our way back for our late morning coffee break we recorded more Reed Warbler sightings plus both Sedge Warbler and a single Chiffchaff.  A lone Curlew flew overhead with its familiar plaintive, unmistakable call and, on the meadows, we had a cock Pheasant and Magpie.  Even the Reedbed Hide produced a Great Crested Grebe.  Approaching the Centre the first of a number of small flocks of Linnets and in addition to the Tree Sparrows feeding on the nuts a Wren was foraging below and in the adjacent bushes. 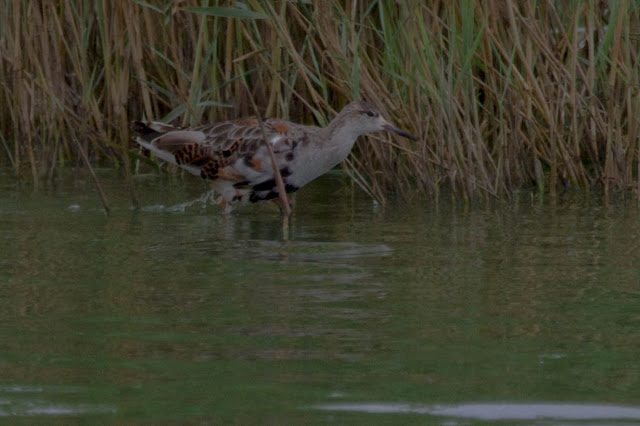 Suitably refreshed we then headed off towards the high bank to make a full circuit of the reserve using the Sash Trail.  At far end before climbing to the bank top with its views over the salt marsh and distant Wash, we had more Coots and Moorhens and our first Little Grebe of the day.  Next a Common Sandpiper and then a Carrion Crow flew across the marsh being harried by a Lapwing.

Looking down on the reserve form the high bank we could see more Canada and Greylag Geese and then a pair of Brent Geese.  Many more Redshanks along with a pair of Tufted Duck and a single Wigeon.  Was the last an early returnee or a late leaver?  Chris managed to find a single Snipe and another Little Grebe on the water below and I picked up our first, two, Little Ringed Plovers of the day and a further three Curlews.

Continuing on to the distant East Hide we were surprised by how little bird life there was on the salt marsh, just the occasional Little Egret and Black-headed Gull.  However, passing Skylark was a joy to behold and then we were at the hide where we had very close views of Little Ringed Plovers along with Dunlin, Black-tailed Godwit and Lapwing.  Just the one Meadow Pipit to be seen and soon, accompanied by many more Sedge and Reed Warbler sightings we were on our way back to the Visitors Centre.  Approaching the 360 Hide a lone Spoonbill flew over and dropped in and then, approaching the Visitors Centre a pair of Greenfinches on the path in front.

In addition to the many birds, mainly waders, there was also a good spread of Painted lady butterflies.

And so our most enjoyable day ended and I had experienced good company from both Chris and other visiting birders to Frampton Marsh.  And in some ways the best part of all. it takes less than an hour to visit to reserve from my Stamford home so when I want a winter change from Rutland Water I can travel eastwards in Lincolnshire.