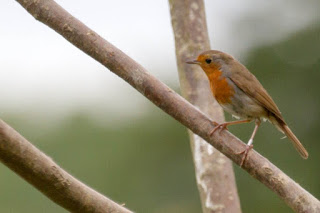 The really good thing about having Rutland Water just fifteen minutes away as your local patch is that when you see the forecast for cloud and possibly rain later in the day you can drive over first thing in the morning and enjoy the warm sunshine whilst it lasts.  This happened to me this morning as I arrive just after 7.30 and was back home by 12.45 in time for lunch - and a chance of actually completing the blog on the same day!

The usual greeting from Jackdaws, Magpies and Crows, not to mention both Wood Pigeons and Collared Doves along with Starlings and House Sparrows, and the whole site to myself.  First stop the Feeding Station, encountering both Blackbirds and Linnets on the way, where I found feeding Blue and Great Tits, mainly juveniles of both, Robin, Greenfinch, Goldfinch and Chaffinch.  Then it was the long walk down to the Snipe Hide overlooking the Wet Meadow adjacent to Lagoon 1 to see if the Black-tailed Godwits were still about.  They were not.  But there was a good variety of species including a single Green Sandpiper, Teal, Mallard and Moorhens.  A few Lapwing were also present along with a small mixed flock of Canada and Greylag Geese.  This lagoon was even more notable for the number of Pied Wagtails present and just beyond the small pool the first Great Crested Grebe of the morning.  On the lagoon itself I could see more of the same along with Mute Swan, Cormorants and Tufted Ducks and a cock Pheasant lifted his head from the grass just long enough to be noticed.  The only Gulls on show were a handful of the Black-headed variety.

On next to the 360 Degree Hide overlooking Lagoons 5,6,7 and 8 where water levels appeared to be falling and a good number of Canada Geese were gathered on Lagoon 5, either on the water or resting on the bank to my left.  A couple of Little Egrets and Little Grebe feeding on the water itself.  Again, more Lapwings and even a Yellow-legged Gull to be seen.  For the first time this summer I actually found an Egyptian Goose; well, three actually as it would appear only one gosling had survived.  Just outside the hide my first Dunnock of the day.


Retracing my steps to the Visitors Centre I duly checked in and paid my entrance fee, £4.50 for old fogeys like me and really good value for money, before checking again on the Feeding Station where I was graced with the arrival of a Great Spotted Woodpecker at the far end.

Now upwards and onwards to Lagoon 4 and my favourite Sandpiper Hide.  No less than 20 Little Egrets were counted which makes me wonder why I bother to leave Spain!  A single Oystercatcher was on the beach and it looked very much as if a pair of Egyptian Geese were using the "dummy" Osprey nest to raise their own family.  But before approaching the hide I mad a very hurried look at the new, replacement, Osprey Hide which was just about completed in time for its official opening by its sponsor, CJW Wildfoods, at the coming British Bird Fair next month.  For my trouble I managed to record the first of two Common Sandpipers for the morning.

In addition to the many Little Egrets there were numerous lapwing and Black-headed Gulls along with a score or more of Common Terns. Just the one Oystercatcher and a single Redshank plus a lone Great Black-backed Gull towards the rear of the lagoon.  Taking a quick look outside the hide I was in time to be regaled by a calling Green Woodpecker as it "yaffled" away in the small spinney in front.  In the very far distance on the other side of the lagoon I could just, with the scope, make out the hovering Kestrel.

On to the Shoveler Hide overlooking Lagoon 3 where I was confronted by very good numbers of both Canada and Greylag Geese along with Mallards, Teals, a Common Pochard and a quartet of Gadwall.  No shortage of Great Crested Grebes and Sand Martins feeding over the water.  Two Shelduck rested on a platform accompanied by Mallards, Lapwing and Coots and a number of Mute Swan pens were out with their families enjoying the morning sunshine, whilst below me at least three recently-fledged Reed Warblers were awaiting feeding from one or both parents.

A quick look in at the Buzzard Hide revealed a rather gorgeous Sedge Warbler not two metres away and then it was back to the Visitors Centre and a further, last, check at the Feeding Station where the Great Spotted Woodpecker had returned and also a moulting male Reed Bunting.


Once back to the car I travelled home by an anti-clockwise circuit of the Water noting the single Osprey at his nest site in Manton Bay and a number of Tree Sparrows feeding at the Feeding Station in front of the Lyndon Visitors Centre.  My final bird, using the scope provided at the Centre, was my only Heron of the day, resting on the far bank.  A most enjoyable time, on my own, and a final tally of 53 species.

Check out the accompanying website at http://www.birdingaxarquia.weebly.com for the latest sightings, photographs and additional information.
Posted by Bob Wright - The Axarquia Birder at 10:53