Time for a bare two hours at Farlington Marshes this afternoon whilst Jenny and Chris visited an elderly friend in nearby Portsmouth.  This reserve lies at the top end of Langstone Harbour almost adjacent to the nearby A27 so plenty of traffic noise as I got out of the car to start my, I am told, three mile ant-clockwise circuit.  On this occasion just the single Wood Pigeon to welcome me but I did have family of Carrion Crows.  The tide was almost completely out so not only mus flats but that distinctive salty smell that accompanies such occasions!  There was the odd Black-headed Gull resting/foraging on the slippery shore and, indeed, they were to be seen at all times in small numbers, mainly resting but with occasional aerial movement.

Keeping to the sea wall as advised by "Sam Portsmouth" who  met in his electric chair as I walked along the initial track (he gave much good advice and also informed me that there were kestrels and a pair of flying Little Owls in the wooded inland section of the reserve), I had a pair of magpies near the trees and then more sightings of the Carrion Crows.  I suspect that there were at least two family groupings on the site.  Stopping at the small lake on the left I picked up a Moorhen followed by a Coot and three Little Egrets whilst on the far side of the water a pair of Mallards drifted along.


Opposite this lake there was a small gully sill with water with yet another Little Egret and further away a flock of about 50 Black-tailed Godwits, a couple of Redshanks and even a Herring Gull. In front of me consistently on the move what I might describe as mini-murmurations of Starlings as they visited both hedgerow and beach.  Maybe over 200 individuals and not roost time so spectacular displays to be observed.

A second small pond held another Little Egret and a pair of Redshanks whilst in the deeper water three young Shelduck were busy feeding and very much trying to give the impression that they were juvenile Great Crested Grebes.  Even the trio of Canada Geese seemed out of place.

Continuing on with my walk along the sea wall towards the "Point Field" I found a pair of Linnets and, in the neighbouring stream, a female Mute Swan with her three well-grown cygnets before rounding the corner to head north I could make out many birds on the far side of the water - but too far away to identify without my scope.  On the nearside of the water a range of Black-headed Gulls and a few Oystercatchers but it was the handful of Curlew that caught my attention.  More Redshanks and even a lone Heron looking for a late afternoon snack.

Then onwards and finally through the meadow recording Goldfinches, more Linnets and a Blackbird to the information barn opposite a fresh water lake.  Here I found a trio of Black-tailed Godwits along with Coots, Mallards, Redshank and, of course, more Black-headed Gulls.  To give a sense of summer and the heat of Spain that I was missing, a pair of Barn Swallows fed on insects over the water.  From here it was a steady walk back to the car park with little extra to add other than another Blackbird, more Black-headed Gulls and the return of both Carrion Crows and Magpies.

Not a lot of species recorded, probably wrong time of day, wrong state of tide and wrong season of the year; other than that it was perfect!  A good healthy walk in the fresh air and a temperature and mixed cloud cover that left you feeling too hot to wear a coat and too cool not to; typical British summer weather. 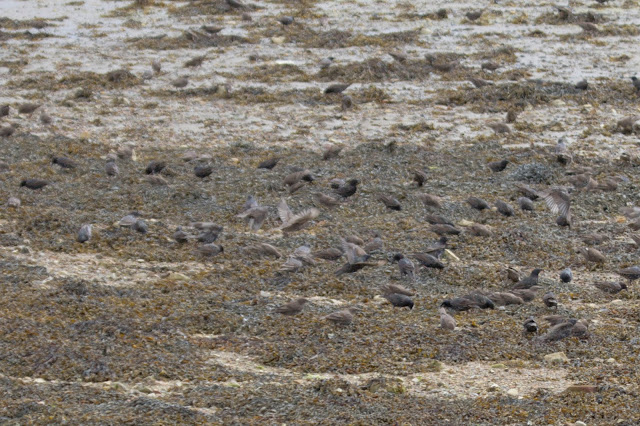 Check out the accompanying website at http://www.birdingaxarquia.weebly.com for the latest sightings, photographs and additional information.
Posted by Bob Wright - The Axarquia Birder at 04:16