Arriving in the early afternoon we had a week’s birding with Barbara and Derek Etherton to look forward to as we drove to our large one-bedroom apartments at the nearby Parque Verde development on Tenerife’s Costa del Sur golf complex.  In terms of accommodation, probably only up to the local hostal quality in Malaga province but at a little over 9 (nine) Euros per person per night were we complaining?

So to our first full day yesterday (Saturday) as we set off towards Mount Teide with the aim of finding the picnic area near KM59 on the TF21 where, according to our guidebook, we were guaranteed to find the endemic Blue Chaffinch.  Twisting and turning ever upwards in the sunny weather with a lovely warm interior even if the outside temperature was gradually falling, especially after passing above 1500 metres, we experienced sun and cloud along with our first common birds including Collared and Rock Doves, Blackbird and then our first Canarian Chiffchaff.  All was going swimmingly until we reached Vilaflor and found the road blocked and a queue of pedestrians stretching back a couple of hundred metres on the feeder road.  Having been forced to take a right turn onto the same road we found the accompanying cars and, on making further enquiries, were informed that the road was closed at the week-end with free bus transport to Teide. All very well but we only wanted to go a further ten metres to reach our destination.

Change of plan and the need to look elsewhere for our birds.  At the lower end of the village we had our first challenge as stopped to identify an LBJ on the wires.  Very pale below giving a Bonelli’s Warbler appearance but too large.  The bird flew across the road to settle n a stone wall giving a closer look as it was joined by a second bird.  But this was a definite Meadow Pipit so we started think Rock rather than Water Pipit but somehow wrong.  Try and check later when we looked at photos and consulted better illustrations.


Next on to a side road towards San Miguel where first we stopped to find the calling Chaffinch and (Derek and I) had our first sighting of a Blue Chaffinch, and my word it was very blue in the sun, whilst above a Common Buzzard was making lazy circles in the distant sky.  A quick sighting of a pair of Stonechats as they crossed the road and then on to the nearby picnic site where we picked up a pair of Ravens and a couple of Common Kestrel.  Around the corner we stopped o search the scrub and were soon rewarded with Sardinian Warbler and a number of (true) Canaries.  Then on down the mountain where we came across a group of five restless Little Egrets before finally hitting the coast for a late lunch break.
The afternoon saw us on the coast itself at Las Galletas, slightly west of our base for the week, and amidst what could only be described as a “hippy colony” with a large assortment of tents and not-so-young residents in a range of attire – or not!  It was here that we to have our best sightings.  First a Canarian Grey Shrike was flushed and came to perch on a nearby cabin giving excellent views and where was the camera?  Don’t ask!  Camera now in hand we set off on a short walk along the volcanic rocky coast where we had regular sightings of the local Yellow-legged Gulls and then a Berthelot’s Pipit that simply refused to fly away as it gorged itself on something and enabled us to take scores of photos from, at times, less than five metres. 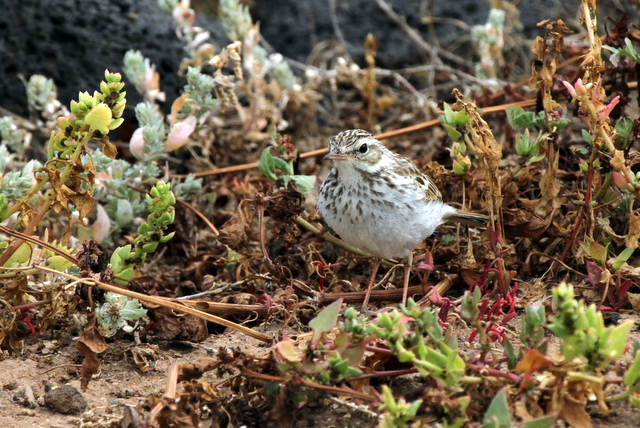 Back to the car and as we looked at the photos Barbara pointed out that there were hirundines coming over the bank towards us.  Back out of the car to discover that we were experiencing a sudden fall of Common Swifts but accompanied by at least a couple of House Martins.  What a great way to end our first full day and including the Grey Wagtail that had come down to bathe at the edge of the swimming pool when we arrived at our hotel, we had now reached 20 species, four of which were not just new for the year, plus with the Common Swift, but also our first endemic species of the Canaries.  And, weatherwise, we had seen sun and cloud (as forecast) and a temperature range from 10 to 24°C.


Check out the accompanying website at http://www.birdingaxarquia.weebly.com for the latest sightings, photographs and additional information.
Posted by Bob Wright - The Axarquia Birder at 10:27