Certainly wet with light rain falling as I set off with brother-in-law Chris Sprinks for the Guadalhorce in Malaga and already emails had come in stating that, inland, it was absolutely tipping it down.  Arriving by 9.15 at the church I thought we two idiots would hang around till half-past and then, perhaps, wander off to Zapata for some in-car birding.  But no, there are more than two idiots in the neighbourhood as we noticed John and Jenny Wainwright walking towards the river and upon catching them up also discovered that David Hird had braved the elements.  In the event, it was more dam than wet as we five headed over to the eastern canal where once ensconced in the Casillas hide it absolutely through it down.  A break in the rain enable us to move on down to the Wader Pool and, again, more rain whilst there.  Next we headed for the Sea Watch and were able to spend some time in the area before returning to the previous two hides for a very short stay  where, once more, we had renewed interaction with the wet stuff.   The same was true of Escondida; dry walking and showers once inside but, at least, Laguna Grande was dry.  By the time we left at 2 o'clock we had had a a fabulous morning's birding recording, by my reckoning, 59 species.  By now it was simply damp, dismal and cloudy but, would you believe it, the journey home was once more accompanied by heavy rain but all had stopped as we arrived back in Mezquitilla.  I must have done something good in the last twenty-four hours!

Unlike recent visits, we were greeted by numerous Blackbirds, many sightings of Sardinian Warbler and over thirty marauding Monk Parakeets.  The first Cormorants were seen flying to and from the reserve and a couple of Moorhens and Coots were seen on the river as we crossed the footbridge.  The best treat, however, was the very close sighting of the local Osprey working itself up river.  Naturally, there were a couple of Rock Doves under the motorway bridge and the neighbouring bushes held the first of many Greenfinches seen during the morning.  Goldfinches were heard then seen as was the constant singing/calling of Cetti's Warblers.  Moving across to the Laguna Casillas we had many more sightings of Sardinian Warblers along with a plentiful supply of Robins and Blackbirds but both outnumbered by the busily-feeding Chiffchaffs.  On the other hand, it was a change to come across a couple of Crested Larks so early in the morning.  A Great Tit was a new addition.

Laguna Casillas held relatively few birds consisting of a pair of Mallards, two pairs of Common Pochard and maybe four pairs of White-headed Ducks.  We picked up a couple of Little Grebes and three Teal plus a few Coots and Moorhens but right in front of the hide along with many more sightings of both Sardinian Warbler and Chiffchaff we had at least five feeding Penduline Tits.  Now that really was a treat, especially when they gave good views rather than feeding behind the rushes. 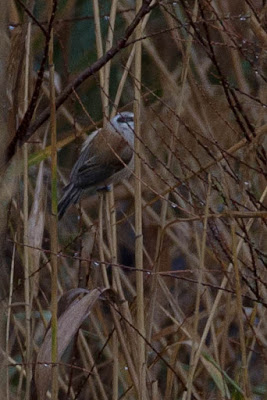 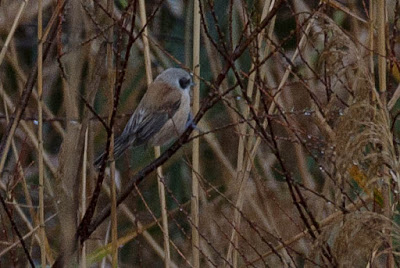 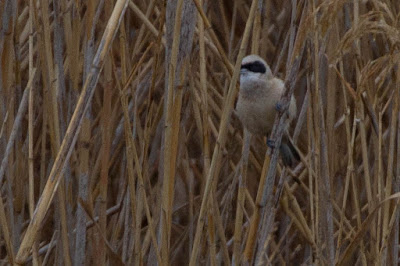 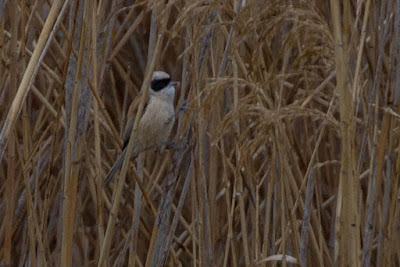 Rather quiet at the Wader Hide with just a pair of Black-winged Stilts and a couple of Ringed Plover.  More of the small birds and then three Hoopoes flew across the back.  We also saw a trio of Teal, a couple of Little Grebes and a pair of Meadow Pipits.  A White Wagtail landed on the track behind us before moving down to the water's edge in front whilst a Mediterranean  Gull was found in the flock of Black-headed Gulls over the eastern river making their way towards the sea.  Below the bank to our left we also, with great surprise, found a pair of Red-legged Partridge.  Whilst a lone Redshank may have put in a late appearance, maybe the bigger surprise was to find a single Blue-headed Wagtail (Iberian sub-species of the Yellow Wagtail), our first of the year and somewhat early on 18 February.

The walk down to the beach produced a Grey Heron in the Old River and the first Stonechats along with more Crested Larks, Robins, Meadow Pipits, Goldfinhes and Greenfinches.  Fortunately, we also managed to fins a couple of Serin and a small number of Black Redstarts then, overhead, the first sighting of a skein (?) of 18 Greater Flamingos.  We were to see these lovely adult bird on a number of occasions during the morning and it was if they were unable to relax and land but were constantly on the move.  The highest count confirmed that there were about twenty individuals in the group.  The large trees at the back, in addition to Cormoranats, held a single Kestrel and a Booted Eagle and as we watched these a lone Marsh Harrier passed in front and then trough the trees and a Collared Dove flew over our heads.

The beach seemed completely empty when we arrived at the Sea Watch, and I mean of all life including fishermen, naked men and even birding men, but out on the water was a small mixed flock of gulls, mainly Lesser Black-backed but also including a few Yellow-legged and Mediterranean Gulls.  Whilst a feeding Black-necked grebe was not too surprising we certainly did not expect to find a (true) pair of Shoveler.  And having found the Shoveler that led us to the raft of Common Scoters.  Despite their collective feeding activity which usually resulted in one or two birds remaining on the surface, we finally agreed on a total of 49 individuals.  Then four Turnstones sped round the rock below us before coming to rest in a close eastern bay.  Naturally, there was a regular movement of Cormorants and the Flamingos put in a repeat appearance.

The walk back to the previous two hides produced more of the same plus a handful of House Sparrows and a single Crag Martin.  To the west we found another resting Booted Eagle and a check at both hides provided nothing new.  Even the Wader Hide produced a Little Egret.

So onto the Laguna Escondida, recording Linnet on the way, and given its much smaller size this was the most productive water with a dozen White-headed Ducks, a few Teal and a couple or so Mallards, good numbers of Little Grebes and a at least two Black-necked Grebes.  Chiffchaffs in abundance worked the edges but it was over the water that produced the speciality of this water with a large number of feeding Barn Swallows which were then joined by a good number of House Martins.  Still a few Crag Martins about and then the first of a couple of Sand Martins found resting in a water-side tree.  Just one missing and then Jenny spotted the first and only Red-rumped Swallow of the morning, so giving us a full-hand of hirrundines.


As we left to set off for the Laguna Grande a Cattle Egret posed atop one of the route directors. On the water itself we found a very small number of Coots along with both Little and Black-necked Grebe and a single pair of Mallard.  Just a trio of Grey Heron to be seen but well over an hundred Cormorants.  In front of us many more Chiffchaffs and the the first Common Sandpiper of the morning and a second a little later on the far right bank.  We thought we had a second Blue-headef Wagtail but then there was another - and another- and another.  Finally, at least a dozen feeding individuals and such a lovely bird to see at close quarters.  A couple of Spotless Starlings were found in the tree tops at the back along with two Booted Eagles (we think there was probably a total of three on site) and on trying to locate the Barn Owl nesting site behind me I missed the Snipe that few up from below the hide and bade a hasty retreat inland.  The final new bird of the day was the pair of Kentish Plover that conveniently dropped in at the back just long enough to be scoped as we had already seen a small number of Zitting Cisticolas either side of the stay at the last hide.

As can be seen, despite the dull day and on-off showers we had a great morning's birding with some very good sightings.  No doubt somebody will enlighten me once read as to the birds I may have missed!

Check out the accompanying website at http://www.birdingaxarquia.weebly.com for the latest sightings, photographs and additional information.
Posted by Bob Wright - The Axarquia Birder at 08:21