What a glorious start to the day with clear blue skies, no wind and by late morning, beautifully warm as we met for the monthly filed meeting of the Andalucia Bird Society in Osuna.  First mistake of the day was get up early and out of the house by 7.45 so that I could arrive with fifteen minutes to spare to catch u with people only to discover that it was a 10 not 9.30 start!  Even then we did not get away till nearly eleven so lots of early morning lost but still had a great day's birding, accompanied in the car by John and Jenny Wainwright, and recorded over fifty species including some real choice birds as will be seen later.  In all there were 32 members present travelling in thirteen cars but I did manage to get away ahead of the pack and most of our morning was spent with no more than one other car present.

Meanwhile, John and Jenny had arrived half-an-hour before me and finding no other members present at the meeting point proceeded to check out the immediate area before returning in time for the "grand assembly."

Now, as I start to write this report, I have just received an email from John with his account of the day so, with thanks and appreciation, I will us his words to continue.

As we headed for the meeting place at km80 on the A92 motorway towards Sevilla, we saw Ravens, Collared Doves, Wood Pigeons, Spotless Starlings and House Sparrows.  On arriving in Osuna there were no other cars or people about so we headed in the direction of La Lantejuela and at the first culvert we picked up Moorhens and Serins, the second culvert we spotted Spanish Sparrows in good numbers, with a few House Sparrows thrown in.  Moving further along we noted a Buzzard, while along the fence on the right we saw two Iberian Grey Shrikes and a few Corn Buntings.  At the second road bridge we found fourteen Great Bustards and also in the area we saw Linnets, White Wagtails, Collared Doves, Ravens, Wood Pigeons, Crested Larks, a Cattle Egret, Spotless Starlings and two Hoopoes. Returning to the cafe/bar we met some of the group and was told that the meet wasn´t until 10am not 9.30 as published.

At about 11am we moved off again in the direction of La Lantejuela and stopping at the second culvert we noted Stonechats, Spanish and House Sparrows, a Barn Swallow flew over us here as did a Sky Lark, whilst in the distance a Red Kite was seen circling on the thermals.  Below him nine Great Bustards were spotted in the distant fields along with a good flock of Calandra Larks.


Moving along to the second road bridge we found the fourteen Great Bustards and above them a female Marsh Harrier was seen.  Suddenly a flock of twenty two Little Bustards took flight as the harrier came over their location, took a circular flight path and returned to virtually the same spot as they had left.  Also about here we saw Ravens, Crested Larks, the Red Kite was spotted in the distance and a Black Redstart was spotted in the field just below us.  It was on to the third road bridge now, where we saw more Calandra Larks, Crested Larks, Linnets and a Red-legged Partridge was noted hiding in one of the hedgerows.  (There were certainly plenty of sightings of this game bird all morning.)

Bob decided to get an early start for the back track - running parallel to the new railway - here we saw (and photographed) Spanish Sparrows and Iberian Grey Shrikes, several Red-legged Partridges were seen in the fields as well as some birds flying over the railway line.  Sardinian Warblers were seen as well as House Sparrows, Corn Buntings, a Common Kestrel and more Ravens.

Passing over the new railway bridge we noted a Little Owl on the ruined building, more Ravens, a Buzzard and another Common Kestrel.  It was here that we were joined by another of the cars, as all the rest had travelled along the new railway track to where we did not know until later.  We now headed for the Alamillo track that heads down to the "Roller ruins".  Along this track we spotted Sardinian Warblers, Crested Larks, Spotless Starlings, Chiffchaffs (singing), Black Redstarts and House Sparrows. As we approached the ruins we spotted the missing group convoy away in the distance at the railway arches.  Looking towards the convoy, we found Lapwings, Golden Plovers, four White Storks and we are 99% sure that it was a Peregrine Falcon that put all the plovers up.   (Meeting up later with the rest of the party this was confirmed and, indeed, it put up most pf the large mixed flock of Lapwings and Golden Plovers.  Also seen in these shallow "pools" were Ringed Plover, Black-winged Stilt, Little  Stint and the above-mentioned White Storks.)


So onto the ruin where we heard first then spotted a male Blackcap, more Chiffchaffs, Crested Larks, Jackdaws, a female Blue Rock Thrush, Black Redstarts, Goldfinches, a female Marsh Harrier, Zitting Cisticolas and our second Barn Swallow of the morning.   It was here that Bob noticed we were out of time and we needed to get to the small reserve at the back of La Lantejuela for lunch and visit to the private Laguna del Gobierno reserve.

As we arrived a small group of Glossy Ibis left the reserve and as we settled down to eat our lunch I could hear Greenfinches, Great Tits, House Sparrows, Chiffchaffs and Blackcaps.  All these we saw later in the reserve.  A male Marsh Harrier then the female were seen before we entered the reserve and again good views were had later.  In the reserve itself we found Serins, Goldfinches, House Martins, Barn Swallows along with Greater Flamingos, Black-headed Gulls,one Lesser Black-backed Gull, Stonechats, Mallard, Shovelers, Pochard, Moorhen, Common Coot, Black-winged Stilts, Cattle Egrets, Little Grebe, White Wagtails, Collared Doves, Crested Larks, Cetti´s Warblers and Spanish Sparrows. And as I was leaving a few of us caught up with the Green Sandpiper that arrived in the first pool.


As Bob drove us back to our car at the meeting point we noted several Common Kestrels, Ravens, Buzzard, Rock Doves and Calandra Larks.  All in all a good days birding with a bird total of over 60 species.

But if you lean across your passenger then take the photo through the opposite window, get the exposure wrong, than you will most likely end up with under-exposed shots such as these of a Buzzard and a Spanish Sparrow!!!! 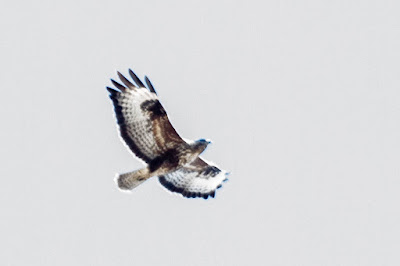 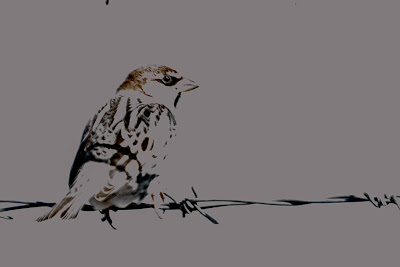 Check out the accompanying website at http://www.birdingaxarquia.weebly.com for the latest sightings, photographs and additional information.
Posted by Bob Wright - The Axarquia Birder at 13:00