Along with over thirty other members of the Andalucia Bird Society I spent the morning at the, almost dry, salinas of Fuente de Piedra in glorious sunny weather and almost perfectly clear blue skies but, on the other hand, somewhat on the chilly side at only 5C when we met up at 9.30.  However, by the time we set off for home to get ready for a night at the opera watching the Met, New York's live (relay) production of Bizet's "Pearl Fishers" at Rincon de la Victoria the temperature had almost reached the twenty mark and most were discarding clothes like there was no tomorrow!

Greeted by a mixture of White Wagtail, Jackdaws, House Sparrows and Spotless Starlings and it was surprising to see that the recent showers had actually created a small pond on the field to the left as we approached the  car park.  A handful of Lapwing were the first birds seen but as we left at the end of the morning they had also been joined by a quartet of Back-winged Stilts.  No sooner had we parked up and it was a case of gathering at the top of the steps alongside the Visitors Centre so that we could be actually be in the sun.  Below us the scrape was completely dry and no sign of any water in the main laguna at this end albeit a shallow stretch to our left held scores of Flamingos and at least twenty Shelduck.  In front of the birds was a large flock of Lesser Black-backed and on closer inspection the edges contained a good number of Mediterranean Gulls.  About a dozen distant small waders close to the Shelduck were eventually identified as Dunlins.  Overhead a few Crag Martins and then the first House Martins of the year.  A quartet of Mallard flew overhead heading towards the small lagunetta at the rear whilst below us a male Blackcap fidgeted about in a nearby tree.  To our right on the now completely arid scrape a large flock of Greenfinches were busy feeding on the ground and in their midst at least a handful of Spanish Sparrows.  A very distant scan to the far end of the main laguna not only revealed many more Flamingos but also a good number of Cranes feeding in the nearby fields.

On round to the lagunetta which was full of water but only the two islands immediately in front of the hide visible and another couple of Flamingos before noting Mallards, Shovelers, Pochards and a couple of Teals.  A pair of Cormorants rested on the main island whilst on the other a lone Water Pipit wandered casually along the edge looking for further sustenance.  No shortage of Coots or Moorhens along with a small number of Little Grebe and a Marsh Harrier rested on top of the tall shrubs on the opposite bank.  A Cetti's Warbler could be heard calling and then the lovely sight of a Bluethroat wandering about the ground immediately below the hide, a first-ever sighting for some of the members present.  The small trees themselves were full of Chiffchaffs and even the occasional Stonechat.  Above the water there was a constant movement of feeding Crag Martins and ever more House Martins plus a at least a couple of Sand Martins by way of variety.  Some even manged to find a skulking Snipe

A walk to the nearby open hide provided more Chiffchaffs and a female Sardinian Warbler before returning to the car park via the lower path alongside the now dry stream.  A Dartford Warbler had been seen just before arriving but the female Black Redstart as a delight to see. 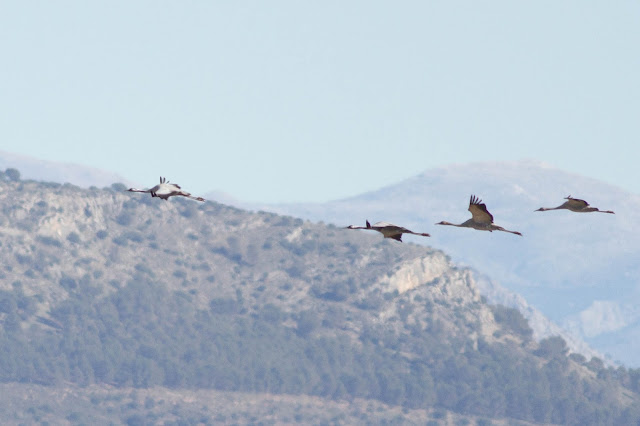 Leaving the centre we drove round to the Mirador de Cantarannas which, again, looking down on the very patch that usually held a good-sized area of water and home to many ducks and waders, was completely dry.  Nothing.  Just beyond one could see more Flamingos and many small groups of Cranes.  From here there was a regular dispersal with handfuls of Cranes passing overhead to join the hundreds on the field behind opposite the mirador.  Immediately below the mirador a number of House Sparrows were very active and a single Robin put in a very brief appearance.  To our left a solitary Iberian Grey Shrike stood sentinel at the top of a small bush overlooking a bare patch of ground and from the way it reacted after about five minutes it had apparently seen its next meal.

Time to head off home by completing the circuit round the laguna and almost at once a Raven resting atop an old tree stump and then a small mixed flock of mainly Linnets accompanied by a handful each of Goldfinches and a Serins.   However, the Stone Curlews seen by some at the start of the morning as they approached the village were not to be seen and the Blackbirds did not show themselves until we were almost home.


Check out the accompanying website at http://www.birdingaxarquia.weebly.com for the latest sightings, photographs and additional information.
Posted by Bob Wright - The Axarquia Birder at 02:26