Fuengirola shore and the mountains

Whilst some of us were hanging around the local hospital awaiting our respective appointments, Barbara and Derek Etherton along with Micky Smith were able to do something far more practical as they set out at first light to try and find the elusive Purple Sandpiper that frequently resides near the lighthouse just west of Fuengirola.  Derek's report follows:


Yesterday we had planned a trip to Sierrania de Ronda for the higher altitude birds, but like so many plans this one had to change beforehand.  It turned out Barbara's results were back at the Medicare Clinic in La Cala so we decided to hunt for the Purple Sandpiper at El Faro en route.

Picking up Smithy at Benalmadena we were parked up and walking the sea front as the sun rose casting it's golden rays on the water, already Turnstones were busy and joined by a few Sanderling.  On the scrub by the side of the walkway Black Redstart, Meadow Pipit and Serin were busy feeding.  Wishing I had put gloves on, getting soft in my old age, we continued walking and searching the shore and rocks for the elusive bird.  A pair of Kentish Plovers ran around in the sand and both Grey and White Wagtails searched for breakfast amongst the stones.  Plenty of Black headed gulls were around but sat up on one of the lamp standards was an enormous, well in context to the Black-headed Gulls.  It was of course a Lesser Black Backed but with it's very yellow legs and extremely black back feathers we came to the conclusion it may well have been the 'Baltic' sub species.

Further along, and no warmer, Gt Cormorant were busy and a solo Gannet, full adult, was quite close to the shore.  A Little Egret flew in to land on the rocks to immediately investigate the pools for it's breakfast.  A little further along the more distant rock held the outline of a Whimbrel and to the side the tell tale iridescent blue of a Kingfisher.  No sooner had the group viewed the Kingfisher when it decided to fly closer to us and perch on rocks just below us.  A charming, beautiful sight and the early morning sun backlit the orange of the females lower bill.  It stayed for what seemed ages, not bothering to fish but happy just to pose for us, and it went through my mind that all those cars, lorries and buses thundering along on the road immediately behind us containing so many people are probably oblivious to what's on their doorstep!


The Whimbrel flew closer for us to have a good look and as we did a solo Razorbill flew across the bay on a mission!  But still no target bird, so having reached one end of the stretch we hoped for better luck on the return journey, but as we went to turn our eyes were attracted to a Turnstone on the lower pathway fighting with what we presumed was it's breakfast.  We watched until it had finished then walked in to see a 'Turnstone Anvil', well knowing of 'Thrush Anvil's' we presumed this served the same purpose because around this flat rock were several remains of Sea Urchins from previous meals, cunning little birds they are.
Walking back we picked up Rock Doves, Stonechat, Chiffchaff, Spotless Starling and House Sparrow, but no Purple Sandpiper.

1015hrs now so back to the car and along to the clinic in La Cala and the good news of 'all clear' for Barbara, a quick conflab and a drive to Marbella and up the Ojen road to Refugio Jaunar for some mountain and forest birds.  Bullfinches were the main target but at the start of a year anything goes as they say, so we set out on the known trail to try to locate this little charmer.  Great Tits seemed to be everywhere and calling incessantly, a Nuthatch, soon joined by Long Tailed Tits were on full view very close to us as we negotiated the track.  Greenfinches were heard making their monotonous call and male Blackcap looked resplendent in the winter sunshine.  Serins sung from the tree tops and several Chaffinches were about, sadly no Brambling among them.  We resorted to 'calling' the Bullfinchs and were rewarded with two males answering and singing well, however in the dense bramble scrub they were only heard not seen.  Walking on the main forest path we viewed Short-toed Treecreeper [such a long name for a tiny bird], Crossbills, Crested and Blue Tits. Nearer to where the olive plantation starts both Robin and Wren put in an appearance.  We walked to rest on large rocks in the more open olive grove and soon picked up Song Thrush, Wood Pigeons,Red-legged Partridge and Sardinian Warbler.  Ambling back on the main walking trail to our parked car a large feeding flock of finches gave us stunning views of Firecrest and all the woodland tits together.

By now it was time for visit to the hotel and the Siskins that can be found here, and pleasingly,  today was no exception.  Whilst partaking in a bevy, non alcoholic of course, a Woodpecker was heard busy nearby, sadly not seen to confirm the species, however the quantity of Siskins compensated. 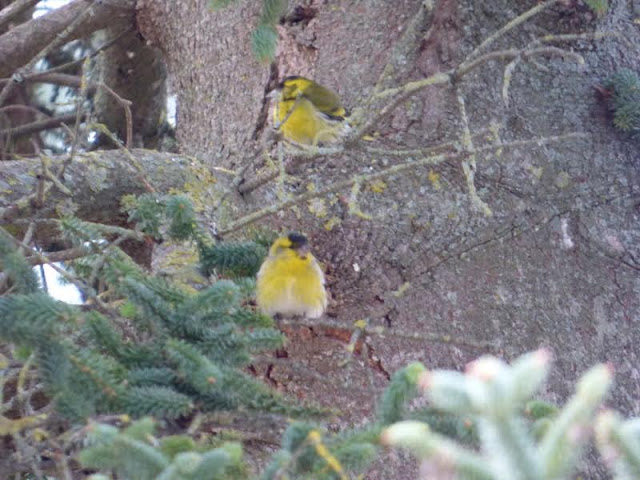 1600hrs and that's long enough as there was shopping to get on the way home and Smithy to return to his abode.

Sounds as if the birding trio had the better day!


Check out the accompanying website at http://www.birdingaxarquia.weebly.com for the latest sightings, photographs and additional information.
Posted by Bob Wright - The Axarquia Birder at 11:56