Quite cloudy when I collected Steve and Elena Powell for our onward journey to Motril and the Charca de Suarez but no sooner over the Malaga border than the cloud clear to give a warm and sunny morning which seemed to become more humid by the minute.


Thought about the direct route but, at the last minute, decided i would take our usual diversion along "Turtle Dove Alley" and just as well we did so - even if the camera and bins were in the boot. Welcomed by the usual Collared Doves and a few House Sparrows but we were soon amongst small charms of Goldfinches and then a couple of posing Zitting Cisticolas.  No sooner had we stopped to retrieve said bins and cameras then we spotted a "small" black and white bird resting at the top of a bare bush not fifty metres away from the road.  My immediate thought was that lapwings do not perch to give some idea of size so very much a question of taking to the bins.  Yes, a rather lovely Black-shouldered Kite posing nicely and showing it yellow legs and even giving us the occasional "evil eye" as w tried to get a decent picture.  Obviously a bird moving through and our luck to be in the right place at the right time.  Continuing on we quickly picked a Crested Lark, juvenile Woodchat Shrike and a dozen Cattle Egrets on a distant electricity wire before reaching the reserve entrance.
No sooner through the gate than a pair of Spotted Flycatchers and a very noisy, calling Cetti's Warbler.  Straight to the Laguna del Traraje where a most handsome male Little Bittern was well-exposed and awaiting our arrival.  The bird remained for a considerable time before climbing away through the grasses but not before we had found a second, female, Little Bittern close by.  The odd Mallard, Moorhen and Little Grebe added to the bird life and even a most fleeting glimpse of a Purple Swamphen.  Meanwhile, mainly) Red-rumped Swallows, Barn Swallows and House Martins fed overhead.  A Kingfisher dashed past and a fleeting glimpse of our first Red Avadavat. 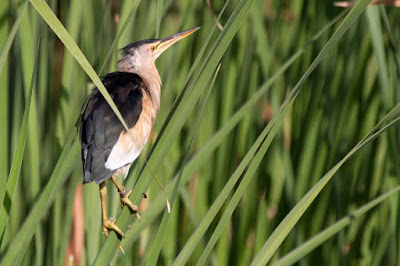 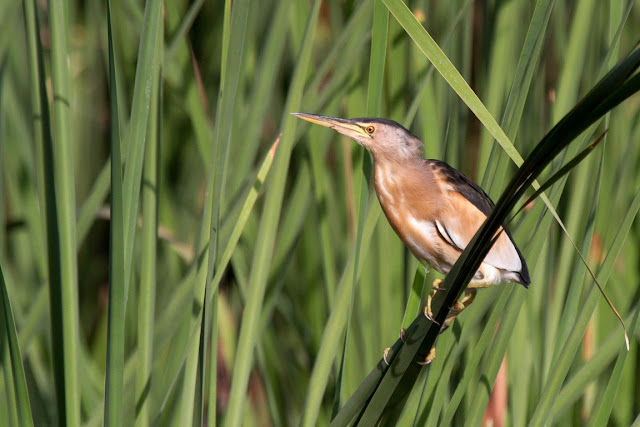 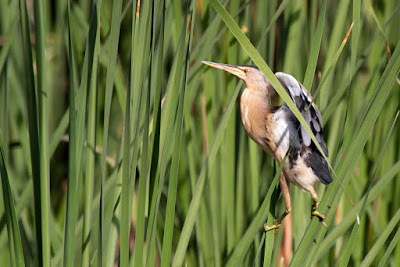 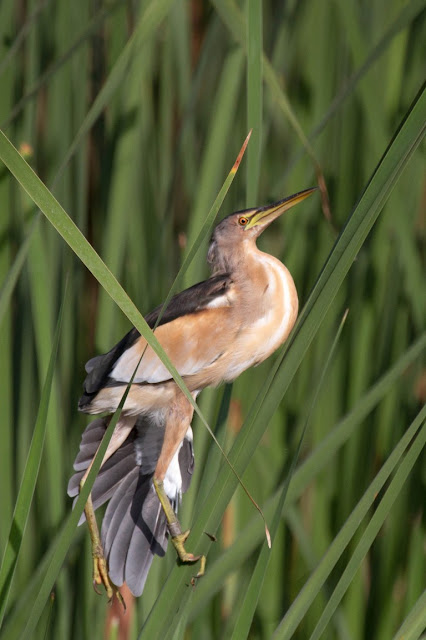 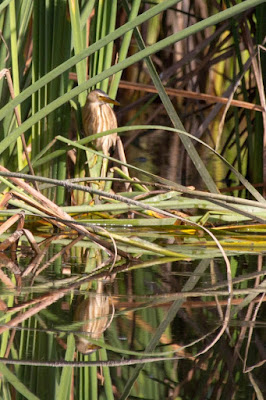 Leaving the hide to walk down to the new hide overlooking the Laguna del Alamo Blanco, which is now well-overgrown with rushes and no longer the great wader pool with just a little exposed water at the front, we picked up a trio of juvenile Flamingos and a few scattered Goldfinches.  On the other hand, the track between the two hides was alive with Blackbirds including a feeding party of seven.

The odd Spotless Starling passed over along with more hirundine sightings and then we were at the main hide overlooking the very green Laguna de la Aneas.  But there is definitely a sign of returning bird life with a good number of Moorhens, Coots, Mallards and even a distant Red-knobbed Coot. However, best of all was the little collection at the far right where below the two resting Grey Herons was a couple egrets close together, one Cattle and one Little Egret.  Immediately below the egrets was a n adult Night Heron and with a couple of feet close to the water a juvenile Night Heron.

Then it was time to concentrate on the small bird, a delightful pair of Red Avadavats that were working the foliage on the small island immediately in front of us.  The male was looking most resplendent in his scarlet chest with those white spots and, one or the other, even managed the ionic fly-past of a small white feather hiding the Red Avadavat carrier hidden behind.  Obviously getting ever closer to the start of their breeding season and, if anything, slightly earlier then the norm. 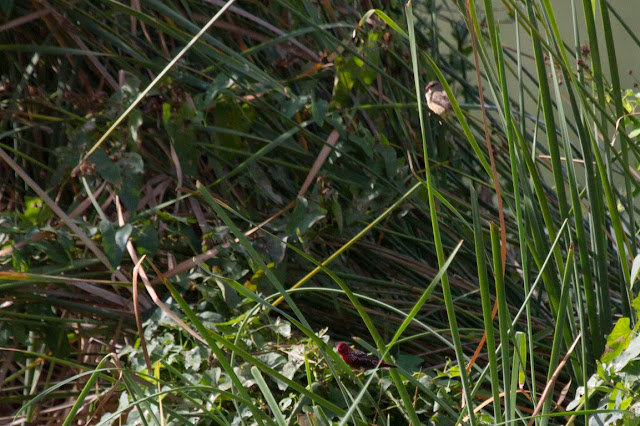 Viewed from both hides overlooking the Laguna del Trebol, we had a good number of Common and Red-knobbed Coots including evidence of successful breeding of the latter.  Just the one Little Egret and a family of Little Grebes but also a second Kingfisher sighting.  Overhead, a couple of Common Swifts moved through and our return walk produced a Kestrel to give a final tally of 30 species for the morning.  And we must not forget the lovely Chameleon that Elena spotted near the Laguna del Trebol. 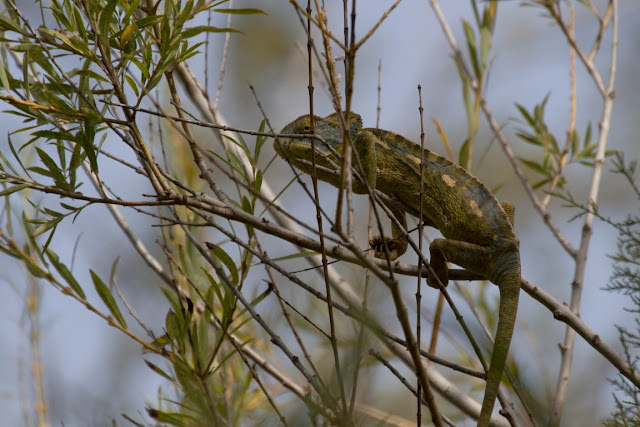 Check out the accompanying website at http://www.birdingaxarquia.weebly.com for the latest sightings, photographs and additional information.
Posted by Bob Wright - The Axarquia Birder at 03:58