A day in the mountains

Feeling much better and anxious to once again get out and about, blow away the cobwebs and see some real birds rather than just the monosyllabic Collared Dove on the roof, the occasional foraging House Sparrows and passing Lesser Black-backed Gulls overhead.  So what better way to return to the birding fold than spend a day out with special friends Derek and Barbara Etherton.  The day promised to be a mixture of cloud and sun so should be good albeit in the event it was very cool and cloudy at the start but by early afternoon the cloud had dispersed to leave a very hot and sunny day - and for most of the time we were birding at an altitude well over 600 metres.  Leaving Alhaurin before 9 we made an interesting stop at the Rio Grande before heading off to Ardales for our morning coffee stop.  The it was up and of-road to take the mountain track to Teba.  Looking back, we realised that this birding track had taken us over five hours to complete; wonderful scenery with beautiful vistas and some very good birding including two new, unexpected, birds for the year, indeed Spain. Now, if only I knew the name of this particular sierra.  Sierra Ortegicar suggests Derek.

Arriving at the Rio Grande to the accompaniment of a few House Sparrows and Collared Doves there was very little water and, as Derek stated, far less then a week ago with no water now passing over the ford.  The truncated stream did produce a couple of Little Egrets and a Grey Heron and stopping at the ford we had views of both Green Sandpiper and a Little Ringed Plover along with the first White Wagtail.  A single Moorhen was paddling around to the rear.  Another Little followed by a Cattle Egret as we drove alongside the river and up to the distant bridge, recording both Crested Lark and a single Spotted Flycatcher, where a little more excitement was to be found.  By now we had a pair of Green Sandpipers down stream whereas on the other side of the bridge a quintet of Mallards sheltered on a small stream of the previous mighty Rio Grande and further up more Little Egrets and another Grey Heron.  The area was a mass of Rock Doves (Feral pigeons), especially on the recently harvested corn field.  We could hear Bee-eaters and the first of a few Spotless Starlings and then more concentrated use of the bins and scope started to produce the smaller birds.  A small party of Long-tailed Tits was moving through the nearby Eucalyptus tree and overhead both Greenfinch and a Chaffinch were recorded.  We may have heard Sardinian Warblers but it was the briefest of views followed by some distinct calling that identified the single Golden Oriole.  On the opposite hilltop a small number of Common Swifts were feeding close to the ground.  In addition, a single Cetti's Warbler was heard.

Then it was back to the main road and half-way back along the track near , probably, the only pool in the area a male Kingfisher was buy searching out hos morning breakfast.  Crossing the dry river and passing more Crested Larks we stopped below the Booted Eagle's nest and, sure enough, there was one adult resting on a branch to our right along side the nest with the youngster busy feeding on the nest itself.  Lovely site, especially when one of the adults decided to take a local flight. leaving the area we had both Blackbird and a Hoopoe to enjoy. 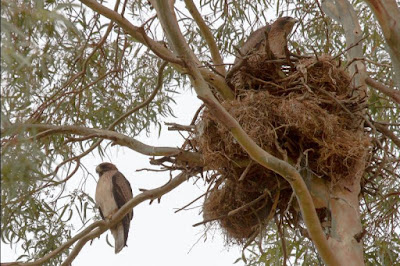 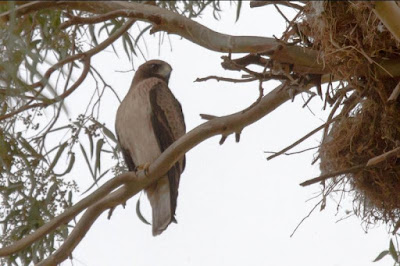 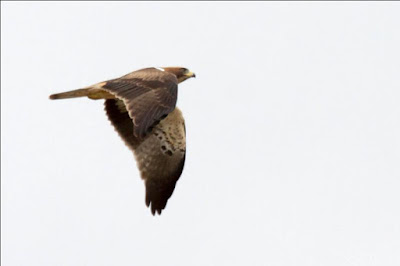 Following the drive up to Ardales and coffee stop, we took the mountain track up into the high sierras.  A stop for the first Griffon Vultures of the day and a calling Jay, we later to hear many more before finally actually seeing a bird, and then an early stop with the ringing sound of passerines soon produced a wide variety of species including all the Tits (Crested, Coal, Long-tailed, Blue and Great), a calling Crossbills, sights of Short-toed Treecreepers and Goldfinch.  naturally, there were Chaffinches to be seen and heard.

The next short stop produced a Subalpine Warbler and then it was time, at about 700 metres, to stop for our picnic lunch.  As the car pulled up in the shade at the side of the road Derek had a Wood Warbler almost in te car before it settle in a nearby larch (?) where we all followed its journey through the tree and then over the car and into the trees on the opposite side of the track. meanwhile, I was look straight ahead at a Southern Grey Shrike sitting proudly on top of a small tree immediately in front of the car.  It gave all three of us great views until it saw the camera slowly rising and decided enough was enough!

And so we continued along the rising track until we over 800 metres up and passing a single Mistle Thrush on the way.  Funny how things turn out.  We had stopped to finally get a look at our first Stonechat of the day on the right, and there were to regular sightings from now on, when looking to my side we had a very yellow bird feeding in the Tamarisk.  Sometimes obscured by branches but so concentrated on its feeding that it was always able to be seen and photographed and it became more and more obvious that we were looking at something different and unexpected.  This was no melodious warbler, at what would have been an excessive height and alien habitat, that we resorted to the "Collins" for clarification.  Yes, no doubt about it, we were looking at an Icterine Warbler which was obviously on passage south and probably pushed slightly off course by last week's strong winds. Bright yellow underneath with the colouring continuing through the vent and to the under-tail feathers.  We even saw what appeared to be a faint, pale shadow at the end of the secondaries but they do not seem to appear in the photographs. 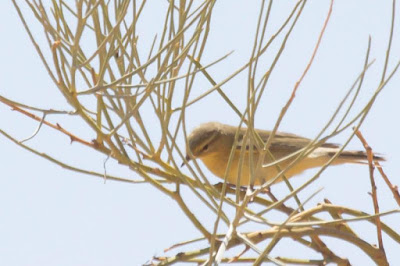 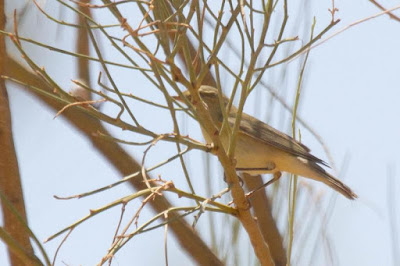 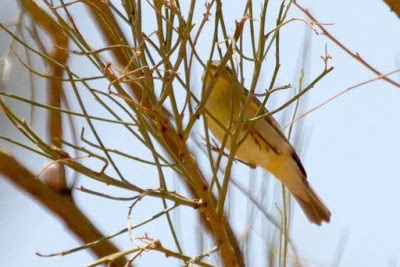 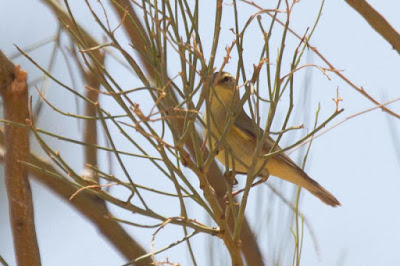 Our next prolonged stop was on reaching the rocks with many caves on the cliff face.  A Short-toed Eagle was playing the sentinel on the end peak and as we searched we found numerous Crag and House Martins along with both Barn and Red-rumped Swallows.  First a Blue Rock Thrush and then our only Black Wheatear of the day whilst a Spotted Flycatcher played hide-and-seek above us.  A Wood Pigeon drifted over behind is and then we found a number of smaller birds feeding below the scrub.  easily enough to pick out the Serins but what about the other, obvious, warblers?  The female Blackcap was relatively easy to identify in the bushes but the other pair, after much observation through the scope, proved to be a pair of Isabelline Warblers, and very nice too.  having recently seen our only Thekla Lark, the sight of a couple of Black Redstarts completed, possibly, the missing birds that we had yet to see.  And all the while the air was full of feeding a Bee-eaters who seemed to be also enjoying these small trees to enjoy they recently caught prey.  And all the while the solitary Short-toed Eagle perched above on the cliff top watching the activity going on below.

What a way to end the day and nothing else produced before we finally reached Alhaurin and a very welcome long, cold beverage.  A final total of 54 species so a very worthwhile, for me, welcome back to the land of the birders.  Now where shall I go on Sunday?

Check out the accompanying website at http://www.birdingaxarquia.weebly.com for the latest sightings, photographs and additional information.
Posted by Bob Wright - The Axarquia Birder at 03:32