A smashing time was had by all!!!!

Back at last from our nine-day cruise from Malaga to Malaga via Barcelona,Madeira and Tenerife.  When I say we had a "smashing time" I mean that in every sense of the phrase; quite literally!

The voyage started in lovely sunshine and we were aboard the Norwegian Spirit by midday to enjoy lunch whilst others were happy to lie back in their almost, next to nothings enjoying the glorious sunshine.  Out in and just beyond the harbour we had great views of diving Gannets and Cormorants going about their daily business in the company of a multitude of Gulls, mainly Black-headed but also a good number of Yellow-legged. Naturally, there were Spotless Starlings to be seen along with both House Sparrows and Rock Doves and how could we possibly depart without a farewell flypast from the local, screaming Monk Parakeets?

But then the fun and games started.  Only one bird seen all day on Wednesday, our full sea day as we set off for Barcelona.  However, nothing to be sneezed at as the morning appearance of a juvenile Pomarine Skua was a grateful addition to the new year list as it slowly flew past us along the starboard side.  But that was it; no more birds until we went ashore in Barcelona and, would you believe it, more Monk Parakeets all over the place!

When we departed that evening the captain did make a ship's announcement that the following two days at sea as we made our way back past Malaga, through the Straits and out into the Atlantic might be a little more rough than usual.  He kidded us not!  Friday was very choppy, great fun trying to dance as the floor moved in the opposite direction to us, but nothing compared to the Saturday when we got stuck into the Force (s and the rolling waves with their accompanying deep troughs.  A life on the ocean blue, etc, etc.  And that's when the "smashing" time really got under way.  First the occasional glass off a table, then a rack of glasses from behind the bar followed by bottle after bottle.

So come early afternoon and we received a telephone call from our neighbour to inform us that we were not the only ones enjoying a little breeze; the very strong winds at home had ripped through our sun terrace taking the conservatory with them; all was wrecked.  What could we do where we were other than make use of the ship's, very expensive, emailing facility to send back details of our house insurers.  Visions of roofs pointing skywards and walls hanging down sprang to mind.

However, come Sunday and we landed at a very calm Madeira.  An email was picked up whilst ashore form another neighbour commenting upon the winds but not realising that we were away from home.  The reply passed on the information and the hope that somebody might be able to take photographs of the damage before any clearing up was considered.  The island itself was very productive with a resting Kestrel a top a fir tree and just about every species of parrot on Earth.  Sad to say, other than the first, all were behind bars in the islands Botanical Garden!  Amazing to see that they actually keep breeding Monk and Rose-ringed Parakeets.

The following day saw us in Tenerife which called for a little shopping therapy and the need to make use of the 7, rather than 21, percentage rates of VAT!  We also received an email from our German neighbour along with the first photographs of the damage to our conservatory.  Lots of mess but the damage was not nearly as bad as we had imagined. 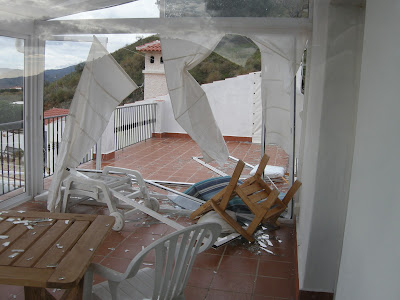 Back to "normal" on Tuesday with the weather bad once again so the ship was unable to dock in Lanzarote.  Another two rough days at sea brought us back somewhat early to Malaga where we were able to disembark and be in our car on the way home by just after 9am.  It was only when seeing the damage at close quarters that we realised that, whilst the destruction was not as bad as we expected, the replacement structure would have to be more substantial.  And that is what we have been doing today and will, no doubt, be addressing our attention in the coming week or so as we, presumably, start the fight with the insurance company over an agreed settlement.  Isn't life exciting in Spain!


Check out the accompanying website at http://www.birdingaxarquia.weebly.com for the latest sightings, photographs and additional information.
Posted by Bob Wright - The Axarquia Birder at 08:49