The weather forecast suggested a wet morning but dry by 1 o'clock, so with high tide at 10am and low tide at 1.10pm it would have suggested the best time to walk up the Hamble River to the conservation area and back would be round the low water mark.  But, upon pulling the curtains this morning, the sun was shining down from a clear blue sky and the wind had all but disappeared.  Shame I'd just washed my hair!  Not to worry, provided the weather remained the same a departure around 11 would be in prefect birding conditions and the tide far enough out to still have the shore birds at relatively close quarters.  And so it turned out.  However, today being a Bank Holiday Monday, it seemed that every man and his dog had decided the same walk would be ideal. So, with family groups, the occasional runner, just about every breed of dog on the planet to hand I set of up the river walk.  Conditions may have been perfect for birding (without the added congregation) but there seemed to be relatively few species about and the end result was just the round twenty recorded.

Thirteen Turnstone on the first short stretch of muddy shore along with the odd Black-headed Gull and Redshank as I headed eastwards.  The more distant next bay produced a couple of Oystercatchers and the first of the very many Brent Geese.  On the flooded meadow more Brent Geese, Oystercatchers and Redshanks whilst on the islands opposite a good number of Dunlin plus Ringed Plover, Curlew and Grey Plovers.

At this time it also became obvious there were very few Teal to be seen but still two score or more Wigeon. With the occasional Woodpigeon flying away at the back of the meadow and a few Carrion Crows noted I made my way to the conservation area itself which still contained deep water.  Lots of resting Wigeon and Black-headed Gulls along with a Curlew and more Redshank.  A few Herring Gulls were also seen as were the half-dozen Feral Pigeons.  In addition, both Blackbird and Magpie were recorded in the gardens at the back of the meadow.

Arriving back in passage lane at noon I decided to continue on along the Warsash shore, past the School of navigation and on down to the Scrape to see what additional species might be recorded.  Many more Brent Geese and no shortage of either Dunlin or Redshanks along with both occasional Grey Plover and Curlew. Passing Strawberry Fields I had a lovely view of a Song Thrush (sadly, the photo did not turn out well) and a singing Robin just two metres away giving a running commentary as I watched the Song Thrush.

The last part of the walk overlooking the mud flats and inlets behind the Scape proved very productive with lots more Brent Geese and Wigeon.  A few Herring Gull and many Black-headed Gulls resting with the Wigeon in the end channel as a pair of Mute Swans made their way towards me. A Little Egret was feeding nearby and then, from the other side of the Scrape wall a Great Black-backed Gull rose into the air for a few moments before disappearing again out of site.  Four Cormorant headed over and down towards the Solent whilst behind me on the hidden lake in the reedbed, usually invisible to the passing walker, a couple of Canada Geese were recorded.

Time to make my way back for a change and quick snack before the afternoon's dance and there at the entrance to the Scrape channel a male Goosander along with five females (Red Heads).  Lovely sight. 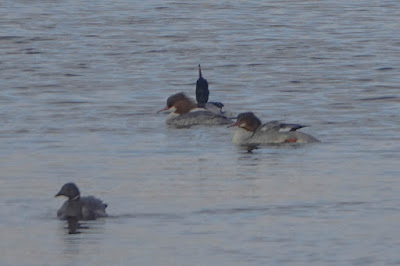 The camera was able to pick out the Grey Plovers feeding alongside the Curlew and then back towards the Strawberry Fields and joined on the path by a trio of Dunnock. Probably about the only time when I was on my own and not passing or being overtaken by the walking throngs.  And I could not but help notice that the Robin was till singing away in the same bush alongside the path - but no sign of the Song Thrush for a repeat photograph.

Posted by Bob Wright - The Axarquia Birder at 10:06