Beautiful morning for birding with clear blue skies and full sunshine even if very cold with a heavy frost as no breeze to worry about; just a question of applying many layers!  Along with dancing friend Richard Osman - not the tall fellow earning a fortune on BBC whose father was at school with me but the shorter and more handsome and active chap who lives nearby in Warsash!  Anyway, just after 9.30 we were at Titchfield canal car park in readiness for my usual walk, but first check out the spinney behind the waterboard's buildings.  Both Woodpigeon and Carrion Crow had already been seen and plenty of singing Great Tits but there on the track, once we had turned round to have the sun behind us, a first of the year Yellow-browed Warbler along with a couple of Chiffchaff.  Wonderful; what away to start the morning.

Moving back to the main path along side the canal we immediately recorded our first Magpies of the morning as we moved down to the viewing point to check the nesting Barn Owls in the old, rotten tree at the back of the field on our right.  Amazingly, a trio of Stock Doves seemed to be using the immediate area as a resting point, almost like meals on wings for the owls.  And as we watched the Barn Owls a quartet of Long-tailed Tits were foraging in the bush immediately in front of us.

Moving on along the path we added a pair of Reed Buntings before stopping, with the sun now almost behind us, to check out the birds on the water and flooded neighbourhood.  Lots of Black-headed and a few Herring Gulls pus the first of the very many Canada and a pair of Egyptian Geese.  Mainly Wigeon on the waters but also a lot of Teal along with Mallard, Shoveler and Pintail.  It was also on this first stretch of water that we found the small number of Lapwing.

The next, larger, lake produced even more Canada Geese and ducks along with some Coot.  Three Mute Swans were observed and it was near here that we looked across the water at the scattering ducks, etc that we found the passing Peregrine Falcon and the first of a number of Jackdaws. Moving on down the footpath through the trees we found a pair of Great Spotted Woodpeckers and the first Blue Tits.  More Great Tits were also seen and then, as we eventually started on our return walk, both a Redwing and a Blackbird on the same tree and more Long-tailed Tits.  On the meadow opposite we finally saw a couple of Snipe whereas the quintet undertaking their monthly survey of the area had noted no less than 130 in the area.

Almost back to the car park and we stopped to watch a Wren in the small bush on the far side of the canal and six Meadow Pipits resting on the wires above us.  The pair of Barn Owls were still posing just inside their nesting hole and below them a stag Roe Deer along with his harem of three does were quietly grazing.  At one point we had der, owls and Stock Doves all in the same frame! 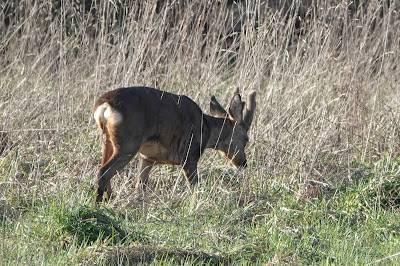 Back at the car it was obvious that news of the Yellow-browed Warbler had already been circulated as it seemed more and more birders (or where they simply "twitchers") were appearing on the scene.  Unfortunately for them, I suspect the bird had already been disturbed enough and had move further away - just shows how fortunate Richard and I had been.  However, one birder informed us that he had seen a mixed handful of Redwing and Fieldfare in the "horse field" from near the bridge so back we went to re-check the site.  No luck for us as we only found a Blackbird but a lone Cormorant did pass overhead.  So back to the carpark again and we lucky enough to find a single female Siskin feeding in a an Alder tree at the side of the canal.  But you try and find the bid in the photograph!!!  The last bird of the visit was the single House Sparrow that flew across the road as we drove out of the car park so giving a final tally of 36 species.  Many thanks to Richard for his excellent and pleasant company ( and also the coffee and Kit-kat) and now look forward to our next birding expedition.

For the latest news follow the Axarquia Birds and Wildlife Facebook page for more photos and comments and the opportunity to share with the wider birding world.
Posted by Bob Wright - The Axarquia Birder at 09:40