Making my way home from Elche in Valencia province I had the opportunity to spend almost two hours checking out the birding in Roquetas de Mar from around midday.  Hot and sunny with clear blue skies and no wind so always a chance that the bird life would be seeking shelter.  Arriving at the fresh water lake a small number of Coot and a handful of Pochard but otherwise very quiet.  A few Common Swift overhead and the occasional Barn Swallow and Black-headed Gull along with both Blackbird and House Sparrow on the residential side of the street.

Moving through the gates to the sandy track leading to the salinas I was immediately pleased (relieved) to see that there was, on this occasion, plenty of water at the side so offering the chance of a few waders and ere long, just past the first bend, I cam across the first Collared Pratincoles resting on the sandy track.  A few House Martins were feeding overhead and I was to see scores more once I reached my turning point near the pumping station runs.

At the back of the large water on my right a few Flamingos and a small group of resting Whiskered Terns. Then the cry followed by sightings of the many Black-winged Stilts and running around on the water edges a few Little Ringed plus many Kentish Plovers.

Then having seen my first I was soon inundated with Little Terns which obviously nested in the area along with many more Collared Pratincoles. Still House Martins above me and many more Common Swifts plus a few distant Little Egrets and a couple of Shelduck.

Time to meet the quartet of feeding Dunlin and even a Ringed Plover in their midst.  Now a rather large gathering of Coot plus a single Greenshank before I continued along the track with a Purple Heron flying across the track in front of the car.  Lovely to then find the Mallard duck with her ducklings which suddenly gathered round her as they realised they were being watched!

Once at the end of my drive and parked next to the ruins of the former pumping station I was able to observe the very large gathering of Flamingos and a trio of Yellow-legged Gulls on the pylon behind me. On the water a trio of Great Crested Grebes and time to start the reverse drive back to the road gates.

However, biggest surprise was to find a pair of Little Stint in summer plumage and a Crested Lark crossed the track to come to rest at its side.

A drive along the back of the salinas and down to my "hidden pool" produced more Little Terns, Black-winged Stilts and Little Egrets so back in the car and on my way home vis Las Norias.  A Magpie was sitting on the wires and as I approached Las Norias a quintet of Cattle Egret took off from the field on my left.  Time for a short refreshment break and driving around the waters of Las Norias apart from a lone Greenfinch just a couple of Coot and fifteen Great Crested Grebe on the main water.  But one must no forget the  occasional Collared Dove on the wires. 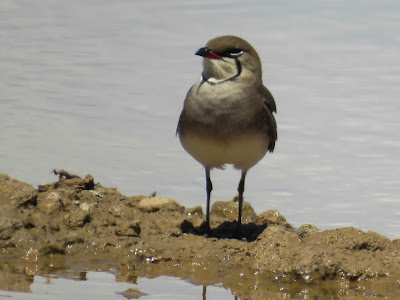 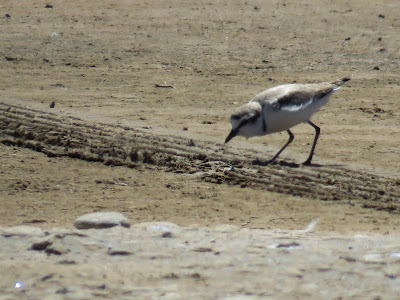 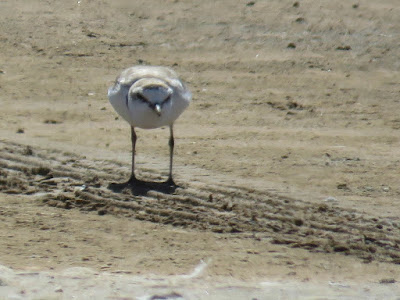 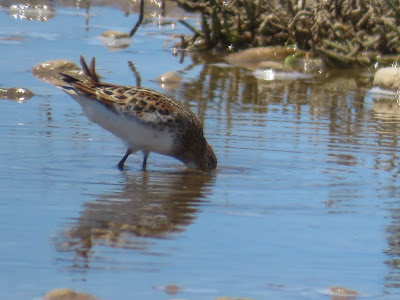 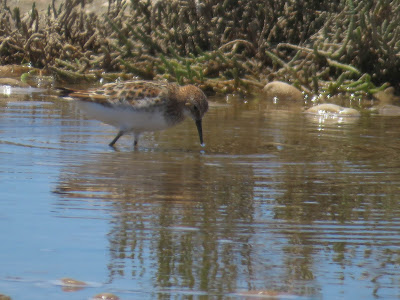 For the latest news follow the Axarquia Birds and Wildlife Facebook page for more photos and comments and the opportunity to share with the wider birding world.
Posted by Bob Wright - The Axarquia Birder at 06:19