Determined to see if the Dipper  really was back at the local Rio Guadalfeo I decided to make an early morning visit to the picnic area before the dog walkers thought of arising and the children would be in school, so off to the river at 7.45.  Making my way down the track from the main road I immediately recorded both Great Tit and a good number of Chaffinches. Both Blackbird and Wood Pigeon were added as I passed the first of the smallholdings and approaching the picnic are there was a trio of Rock Doves and a single Hoopoe.  Imagine, therefore, my horror to discover that somebody had camped the night in their white van along with the adjacent car - unless, of course, they were present for some other nefarious reason! Thinking all the best plans of man, etc I made my way to the water's edge and t my right noticed the small brown blob bobbing in and out of the water,  Difficult lighting as I looked directly into the sun but realising that the Dipper was back in what would appear to be its favoured foraging spot I, nevertheless, took a couple of record shots (see Facebook page for a more detailed gallery of Dipper shots). Using the limited tree cover I made my way slightly upstream to try and get the angled sun behind me and although the bird crossed the river managed to get a couple of better efforts.  At this point worth pointing out that the Dipper when first seen as in the company of a White Wagtail.

During the whole of this experience there was the constant calling of at least two Golden Orioles and even more when I eventually carried on down the track to its end at the back of the water control station.  Within the picnic area at least four Spotted Flycatchers and a handful of the local breeding House Sparrows plus more Chaffinches and a couple of Great Tits.  A male Blackcap flew in next to me and started to sing and on the ground a pair of foraging Goldfinches.  Continuing on down the track more Chaffinches and Golden Orioles plus both a Zitting Cisticola and a Greenfinch.  Lots of calling Cetti's Warblers.

Approaching the holding pans of the water control a sleeping Heron in a nearby tree that kindly woke up as a second Heron passed in front. Once on top of the works to look down into the pools a quartet of Coot including a couple of well grown youngsters and a Little Ringed Plover resting on a side wall.  Ere long it was joined by a Grey Wagtail. With a Nightingale singing below me and both Common Swifts and House Martins above I started out on the return drive and added a male Mallard. But before reaching the steps down to the car a male Golden Oriole flew overhead past me and disappeared into the large eucalyptus tree.  Hearing is one thing but trying to find the bird in the tree is a different matter altogether.  Having seen the bird land I took a chance and photographed the whole tree just in case! 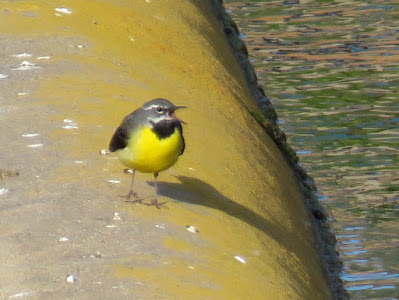 Time to drive towards Motril so that I could clean all the dust of the car but not before driving the short length of track on the other side of the river as I approached the gorge.  An immediate Little Egret was a welcome sight as it watched the fast flowing stream next to the track and then scores of House Martins which had come down to feed on the insects above the water and vegetation.

At the end of the track a Spotted Flycatcher and a couple of Great Tits and looking up was in time to see the Peregrine Falcon passing over the high cliff face.  Returning towards the road I added a couple of Spotless Starlings and a single Common Swift plus a passing Barn Swallow. Then it was time to get the car power hosed and back home for a shower and change of clothing.  But did I capture a shot of the Golden Oriole that passed overhead whilst at the water station and would I have a printable shot of the Dipper? 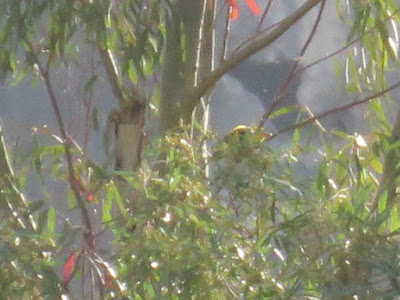 Posted by Bob Wright - The Axarquia Birder at 08:13