With bad weather forecast for my final two days in Stamford a sudden last minute change of plan led to me saying goodbye to these two lovely sites on the same day.  In the end I was at Rutland Water by 8.30 on a damp and very, very cold morning starting at the North Arm from the entry point just before Hambledon.  Approaching the reserve I had already seen a low flying Red Kite, Carrion Crow and Wigeon and I was to add a couple of Magpie and Black-headed Gull as I approached my first stop.    On  the water both Wigeon and Mallard and a little further out a small number of Tufted Duck and a couple of Great Crested Grebe.

Next it was off to the Visitors Centre Car Park where I quickly came into contact with a few Blackbirds and even more Jackdaw.  The Feeding Station was busy with many Blue and Great Tit along with the occasional Blackbird and a constant appearance of Dunnock and Chaffinch, plus the scavenging Grey Squirrel and Brown Rat below the feeder itself.

With damp rather then rain in the air I set off to Lagoon 4 and immediately came across more feeding thrushes, mainly Blackbirds but also a handful of Redwing.  A Robin skipped across the path in front of me and then reaching the big field I noticed the distant shape on the ground and raising my bins was delighted to see a Green Woodpecker. A Pheasant was at the far end of the narrow path and approaching end path up to the Dunlin Hide a found my first of three Wrens for the visit.  So much water in Lagoon 4 and the windy, cold conditions seemed to have driven away most of the birds so just a few Wigeon and a couple of Mallard plus a trio of Teal. A similar sight greeted me at the Sandpiper Hide so straight on to Lagoon 3 and the Shoveler Hide.

A little more activity here with a few Teal in front of me and a number of Lapwing and Cormorant resting away to me left. Beyond the near island a small [party f Tufted Duck and a handful of Shelduck and then, without warning, I was suddenly looking at a male Goosander and just beyond a male Goldeneye surfaced and, indeed, a true pair were working the area.

From here it was a walk to the far end overlooking the South Arm and from the Crake Hide, which was the opposite of the very full Lagoon 4 with next to no water to be seen from the hide, a call then the sight of a Redshank. Away to my far right but a better view looking left from the Lapwing Hide, a flock of Canada Geese and more Wigeon.  On the water in front plenty of Coot, Tufted Duck and even both Heron and Little Egret on the left shore. 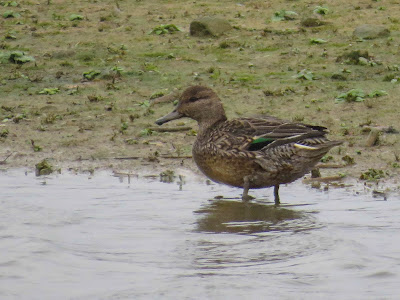 Back to the Visitors Centre to meet an old friend and whilst there noted a trio of Great White Egrets and a a similar number of Goosander on Lagoon 1.  A House Sparrow had joined the tits and Chaffinches at the Feeding Station as I made my way  back to the car to take the circular route home vis a short stop at the  Lyndon Centre.  Passing through Gunthorpe on the way I came across a small flock of Rook and more Blackbirds as I made my way down the steep hill to the Centre itself.  The feeder here was awash with activity with Pheasants, Dunnocks and Robins along with few Moorhen and a pair of Mallard in and around the pond below the feeder and numerous Blue and Great Tits actively feeing on the feeders.  These were joined by many Chaffinches and Goldfinches and a lone Greenfinch.  Tome to move on and once back on the main road heading towards Edith Weston a flock of Greylag Geese took off from the field on my left above the water.

By 11.30 I was on my way back to Stamford and then on through Market Deeping and Deeping St James to the Deeping Lakes reserve out on the back road to Crowland, arriving around 12.15.  Having passed a couple of Collared Dove I entered the reserve to find Mute Swans and Carrion Crows, the occasional Magpie and regular appearance of a Wood Pigeon or more.  On the islands I could see a number of resting Wigeon and Teal plus Lapwing, a trio of Pochard and both Black-headed and Herring Gulls.   A little further away more Mute Swans along with Cormorants, a Heron, an Egyptian Goose and, finally, this water would not be the same without the ever-present Coot and a few Moorhen.

A light drizzle was now falling as I headed for the hide overlooking the main water and here a good selection of birds albeit much fewer than on ,y last visit.  The first bird noticed was the male Goosander and moving about or sheltering under the trees on the island I added Mallard, Teal, Tufted Duck, Gadwall, Great Crested Grebe and more Cormorant.

Making my way along the rutted track out of the reserve I stopped the car and stared in amazement at the second Green Woodpecker seen this morning. You barely see one in three or more years and then two in four hours!  Perhaps the local Robin also could not believe what it was seeing and came out to check for itself!

Then, rather than straight home, I followed the road alongside the Welland towards Crowland for almost ten miles to see if I could find the wintering Whooper Swans, but without luck,  Constantly checking the river to see if they were on the water along with the Mute Swans and Mallards, but no.  A Kestrel rose from the side of the road and within 800 metres of leaving the Lakes I had also found a number of feeding Pheasants.  Reaching the outskirts of Spalding where I crossed the river to return along the other side of the river having added Starlings in the town and a then a resting Buzzard on a post about half-way back. A small party of Jackdaws was also note and, would you believe it, within 800 metres of the start back at Deeping Lakes I found a party of approximately 50 Whooper Swans on a distant field about where I had previously seen both the Kestrel and Pheasants half an hour earlier!  Unfortunately no road or track to take me any nearer to the Whooper Swans so a short stop on the narrow road for a quick look through the bins and distant record shots from the car.

A lovely way to say farewell for the foreseeable future with a final tally of exactly 50 species for the morning.