Almost Christmas and the weather forecast for Warsash, half-way down Southampton Water towards the Isle of Wight, is not good.  Indeed, rain forecasted for 11o'clock and then pretty much all day with Christmas Day sounding as if it will, if anything, be even worse.  So, come 10.45 Jenny and I were out of the house and across the road to take the short path to the neighbouring Hamble River where the tide, by timing, was half-way in.  Carrion Crows flying about and upon reaching the river with its exposed mud flats a handful of Brent Geese along with the first of many Curlew to be seen, a quartet of Black-tailed Godwits, a few Redshank and an Oystercatcher.

As we started our leisurely walk upstream we soon found a Little Egret and the local Black-headed Gulls plus more Curlew and Black-tailed Godwits.  Once one Grey Plover had been recorded we soon added another half-dozen along with a dozen Turnstone and a good supply of the wintering Dunlin.

Ere long we had also found the numerous Wigeon and good-sized numbers of Teal.  Brent Geese numbers continued to increase as they were busy feeding right the way up the river as far as we could see.  We even added a sleeping Greenshank.

Once we had found the first Rock Pipit we found two more along with both Carrion Crow, Redshank and Oystercatcher on the opposite side of the path away from the beach.  Further out on Bunny Meadow more Curlew and then a flock of 21 Shelduck.  A couple of Feral Pigeons flew away from the shore to the trees on our right but we had to wait until we had completed the return journey before observing the first Wood Pigeons of the morning.

Once at our return destination, the conservation area, we noted the four resting Heron and along with both the Wigeon and Teal in the bay beyond the rotting hulk along with a single Lapwing.  However, pride of place probably went to the Roe Deer that was feeding in the misty grass at the back of the meadow.

The return walk, with the weather now much darker and a misty drizzle almost imminent, produced another Greenshank and a handful of Ringed Plovers before the biggest surprise of all.  Approaching the house having crossed the road from the small path a small bird foraging in the bare tree appeared to be a Blue Tit bit, no, the length of the tail, along with the others that soon joined it, confirmed a Long-tailed Tit.  Bird of the morning?  It was for all of two minutes for when checking the Blue Tit in the next bare tree we discovered that we had actually found a pair of Goldcrest.  And to cap it all, we did also see a Blue Tit in the third tree, along with both Wood Pigeon and Magpie followed by a Dunnock in the garden. 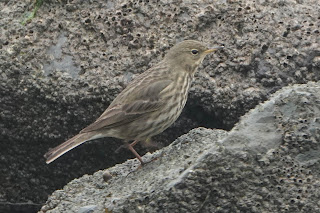 Check out the accompanying website at http://www.birdingaxarquia.weebly.com for the latest sightings, photographs and additional information
Posted by Bob Wright - The Axarquia Birder at 07:44