Almost in residence so time for an afternoon visit to nearby Charca de Suarez in Motril. Taking the Camino Patricia route along the back of the reserve, I first recorded a passing Kestrel followed by a dozen feeding Cattle Egret as they followed the ploughing tractor.  A male Stonechat on the wires then House Sparrows before arriving on site with a second Kestrel.

Straight to the Laguna del Taraje in lovely, warm late afternoon sunshine to find, yet again, no shortage pf water and tall vegetation.  A score of Mallard and a single Moorhen but, even more obvious, right in front of me, a Purple Swamphen.  A Little Grebe made its way to the far right and was replaced by an approaching Shoveler.  Moving to the hide at the other end of the water a trio of Gadwall and the first Red-knobbed Coot.

Very little to be seen at the Laguna del Alamo Blanco with too much water and lots of tall grasses.  A sleeping Greenshank and a well-hidden Heron in addition to a couple of Mallard and a Moorhen.  Moving on to the main hide overlooking the Laguna de las Aneas first a Robin then an over-flying Blackbird, the first of a quintet to be seen during the visit.

Once settle in the hide obvious that there were still numerous Common Coot to be seen along with more Red-knobbed Coots. A single Little Egret resting on the island in front and many more Mallard and a good number of Shoveler.  The occasional Little Grebe before searching the far end where I found Pochard and a trio of Ferruginous Duck.  Also in attendance a dozen Cormorant and as many Black-headed along with a quartet of Yellow-legged Gulls.  Lovely to find a couple of Teal and, of course, very many more Moorhen. However, pride of place probably goes to the dozen Grey Heron perched around the back.

Nothing new when I arrived at the Laguna del Trebol but more Red-knobbed Coot but upon walking round to the hide at the southern end of the water a Grey Wagtail and feeding Chiffchaff. A Collared Dove came to visit and then a Robin appeared in the bushes to my right. Having followed the movement I eventually found the foraging Cetti’s Warbler in the dense undergrowth and in the reeds to my right a Stonechat.

The last visit was to the Laguna del Lirio where, in addition to the trio of Red-knobbed Coot and single Moorhen a visit by a male Blackcap was a new species for the evening. Leaving the reserve I was pleased to see the arrival of a dozen Crag Martins circling the adjacent apartment blocks obviously down from the mountains to start their winter break at lower levels and searching for a preferred roosting site now that the sun had dipped and the evening temperature was falling.  And now sixteen Cattle Egrets as I returned by the same route. 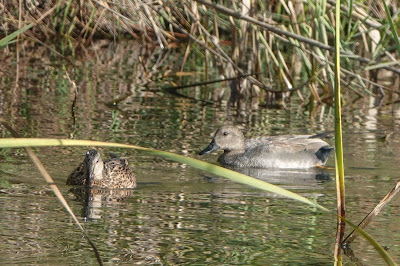 Check out the accompanying website at http://www.birdingaxarquia.weebly.com for the latest sightings, photographs and additional information
Posted by Bob Wright - The Axarquia Birder at 02:34