With Jenny remaining at the hotel, Derek, Barbara and I made an early start for a day at Cabo de Gata.  After a breakfast stop at Pujaire we were at the first hide as you entered the village by 9.30.  Another lovely day but on arrival the light was not too good and the low sun shining straight into our eyes and camera lenses was not conducive to good birding.  This certainly led to our hopes being sky-high as we thought we had a close view of the recent-arriving Wilson's Phalarope but it was not to be; just a Greenshank feeding in the same manner which caused all sorts of confusion but the tell-tale identifier being the slightly raised bill.  However, there was no shortage of Flamingos on the now shallower water as we checked out the wires and fields on the opposite side of the road finding our first Iberian Grey Shrike along with Spotless Starlings, Crested larks and a Sardinian Warbler.

A closer look at the water found a number of Black-tailed Godwit along with Slender-billed and Lesser Black-backed Gulls.  Waders included Redshank, Common Sandpiper, Little Stint, Dunlin and Ringed Plover. Whilst we watched the dozen or so feeding Barn Swallows we also became aware of both Little Egret and the pair of Heron.  The Mallard were further away to our right and at the very back a bathing Curlew.  A lot of Stonechat and a couple of Iberian Yellow Wagtail before we saw the single Raven fly over the site.

Moving on round to the next hide we picked up Collared Dove and once ensconced both Greenfinch and and Robin.

Approaching a low flying Stone Curlew had been seen and then other from the hide.  Cormorant resting and flying over the water along with more Little Egret and very many Flamingo before finding the ten Spoonbill. Yet more Kestrel and then the flock of Avocet which seemed to be in a massed feeding frenzy, presumably invertebrates stirred up by the accompanying Flamingo. A lone Jackdaw flew over shortly followed by the only House Martin of the morning.

Moving on down to the Public Hide we had our first Thekla of the morning along with Short-toed Larks.  The shore in front of the hide produced Ringed and Kentish Plovers, Little Stint, Sanderling and Greenshank.  On the water both Mallard and Shoveler along with Shelduck and many Slender-billed and even more Black-headed but only a couple of Mediterranean Gulls.  Not so much the House Sparrow but the single Willow Warbler that appeared outside the hide was a very welcome surprise.

A quick trip up to the lighthouse was very unrewarding albeit a Corn Bunting and a pair of Black Wheatear were seen on the way up.  Once back to we took the track along the back of the salina and encountered very many more small waders, all previously seen other than the lone Ruff and a small number of Turnstone.  We were almost at the end of the track before we came across our fist and only Blackbird of the day and a Hoopoe also put in a brief appearance before finding a handful of Linnet.  Time for a drink and tapa before starting on the afternoon visit to the Rambla de Marales.

Making our way along the beach track yet many more Stonechat and the first of the Barn Swallows.  However, upon arriving at the laguna there were thousands of Barn Swallows feeding up in preparation for their coming migration.  Indeed, not just resting in the reeds but also on the sand itself as if wanting to get some heat into their bodies.  Amongst the thousand plus birds Derek eventually found a House Martin but it was a little while before we got decent views of the small number of Sand Martins and then finally found a Red-rumped Swallow - sitting in a tree immediately in front of the car.  But not just hirundines, there must have been an hundred plus Iberian yellow wagtails in the same, relatively small area.

On the water itself a large number of Flamingos plus Coot, a single Purple Swamphen, Mallard, mainly Shoveler and a female Red-crested Pochard.  A Little Egret was hiding in the reeds and before we moved on even two pairs of White-headed Ducks.  A passing Marsh Harrier put up most of the smaller birds and before we had added Zitting Cisticola and Cetti's Warbler.

It was not so much the Little nor Black-necked Grebe but the closer Bar-tailed Godwit that took the prize.  And so back to our hotel in Roquetas de Mar and having not seen a single specimen all day we were greeted as we approached the own by a dozen Cattle Egret. 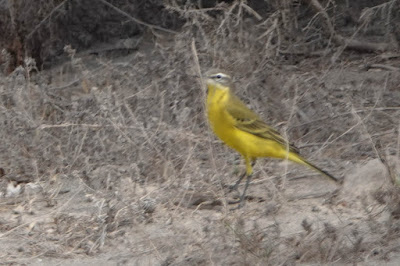 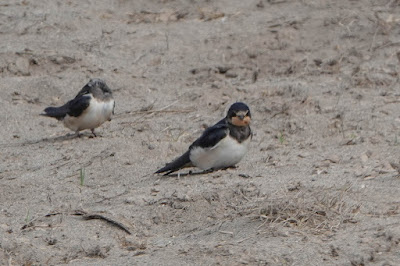 Posted by Bob Wright - The Axarquia Birder at 03:17