An overcast morning in Warsash with a light breeze and a misty drizzle trying to decide whether or not to turn into a more persistent period of light rain. Leaving the Dunnock feeding in the garden I drove to the southern end of the village to walk along Workman's Lane and on down the narrow track to the shore.  Once parked at the top a leisurely wander to the far end of the metalled road produced Blue Tit, Carrion Crow, Wood Pigeon and a good-sized flock of low feeding House Martin.  Having reached the track leading into the horse fields I soon found a couple of Yellow Wagtail and back at the road both Robin and a pair of Magpie.

Then it was on down to the end following the track to the shire where I found the receding tide.  On the muddy exposed beach a small number of Black-headed Gulls and single Turnstone and Oystercatcher.

Within minutes the Oystercatcher number had increased to a dozen and accompanied by 27 Black-tailed Godwit.  Also present a few Herring Gull and as a sandbar appeared just off shore a couple of Lesser Black-backed Gulls. 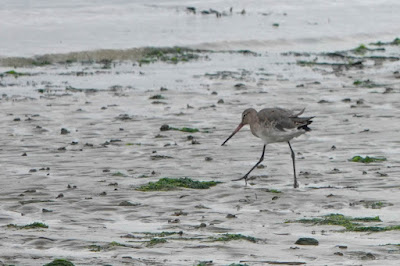 A flock of Starling came down to feed on the seaweed plus a pair of Collared Doves.  Before starting the return walk I was busy checking individual gulls when I located up to a handful of Mediterranean Gulls.

Re-joining the path leading back to Workman's Lane a trio of feeding Blue Tits which disturbed the nearby Chiffchaff.  The small pond below also held a couple of Mallard and a trio of Moorhen.  Once back on the metalled Workman's Lane the local reserve held many low-feeding House Martins along with both Sand Martins and Barn Swallows. Finally, on returning to the car a Chaffinch in the neighbouring tree. 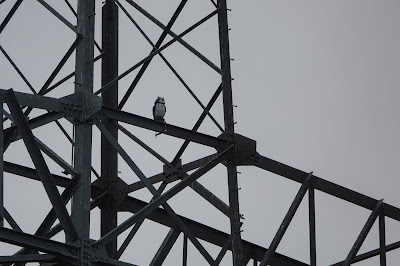 Posted by Bob Wright - The Axarquia Birder at 08:00