With Jenny feeling much better and visiting her friend to nearby Langtoft I took the opportunity to visit both neighbouring Baston Gravel Pit and then on to Baston Fen nature reserve for a walk through the small copse and on along the river bank.  Local Magpies to see me off and then a resting Buzzard followed by Carrion Crow, Wood Pigeon, Jackdaw and Collared Dove as I approached Baston Gravel Pit where another Carrion Crow was perched on the wires.

On the water on both sides of the water on Cross Road where it meets Baston Outgang Road a number of Greylag Geese and Mallard along with a healthy population of Lesser Black-backed and a few Herring Gulls.    No shortage of Mute Swans and soon started finding both Little and Great Crested Grebes.  Whilst a single Little Egret and a number of Moorhen were seen on the western side of the road, the eastern side produced more of the Greylag Geese, Lapwing and Coot.  Similarly, this was also where the Mute Swans were feeding and resting.

Above me a single Red Kite was quartering the adjacent fields and a couple of Barn Swallows were noted as, along with another visiting birder, we tracked the departure of a young Great Crested Grebe.  On this occasion, no sigh of any of the local Sand Martins.  However, I was informed about the long-staying Black-necked Grebe so back to view the western water and find the bird.

Time to move on to Baston Fen Nature Reserve with still many Wood Pigeons and Carrion Crow still to be seen and start my walk along the bank of the Counter Drain. A pair of Mute Swan on the water itself and up ahead I watched a Marsh Harrier quartering the fen and putting up a number of Little Egrets.

A ruin on the opposite side of the water held a small flock of Jackdaw and a couple of Linnet were feeding in a neighbouring shrub.

Making my way back along the raised embankment I recorded first a Wren followed by Goldfinch and Blackbird before reaching the car.  The drive back to Stamford produced both House Sparrow and Starling to give a final total of 25 species in about an hour. 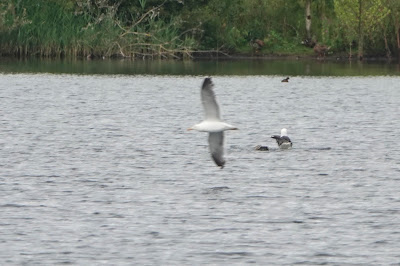 Check out the accompanying website at http://www.birdingaxarquia.weebly.com for the latest sightings, photographs and additional information
Posted by Bob Wright - The Axarquia Birder at 11:00