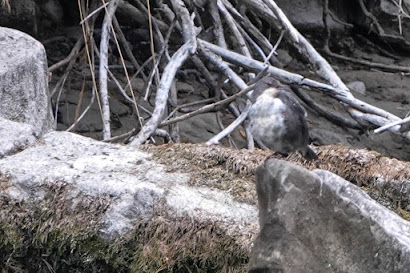 Time to leave our final hotel a little north of Jaca and travel onwards to Valencia including time for a short stop at the Laguna Gallocanta south-east of Zaragoza.  However, before departing I took a walk down to the rocky Rio Aragon at the back of the hotel and immediately disturbed a feeding Grey Wagtail.   All seemed very quiet as I scanned upstream and then to my great joy and delight found a preening, presumably young, Dipper on a rock to the left.  Not just one as further upstream I located a second, adult, Dipper.  Finally, as we packed the car and about to depart I looked through the fate and there was a female Common Redstart resting on the track not three metres away.  Once underway, with five minute we had seen both Red and Black Kite along with a Buzzard before a trio of Carrion Crows crossed the road in front of us.

Before arriving at the Laguna Gallocanta we also encountered more Carrion Crows and Buzzards along with Spotless Starling, House Sparrow, Rock Dove, Wood Pigeon, Collared Doves and a few Magpies.  Once on site we discovered, unfortunately, that the Visitors Centre was closed for a five-day holiday so unable to extract any local information nor collect a local map to the laguna.  However, with House Sparrows, Spotless Starlings and Barn Swallows around the area and from the car park we could make out many birds on the water in the far distance, including Cormorants, before we set off to use the tracks to circumnavigate the laguna, allowing ourselves about and hour (eventually nearer 100 minutes) before continuing our drive to Valencia.

From the fort hide I was able to find a number of Shelduck, Avocets and quartering Marsh Harriers whilst in the nearby bushes both Reed Warbler and Linnet.  A further stop a short distance on a scan of the beach found a large flock of Dunlin and a single Redshank. Then, skulking behind a small tree in the water, a Purple Heron.

Moving on the car disturbed a small number of Spotless Starlings before a quintet if Stock Doves also appeared out from behind the few trees and flew away to our right.  With the advantage of a little height we came across a small abandoned building and sitting on the roof a Northern Wheatear.  Within the rest of our circuit we were to observe at least a further eight individuals.  A Common Kestrel took off from the back of the building. Below us on the distant water we could see a number of large white birds and the next observation post gave a clearer view revealing a small flock of Glossy Ibis to the left with many Little and a few Great White Egrets to their right.  Also present a handful or more of feeding Spoonbills and all accompanied by at least a dozen or more Grey Herons.

Continuing on we came across more Marsh Harriers and a pair of Buzzards along with a Lesser Kestrel.  A Black Redstart was feeding at the edge of the track and then a stop to observe the resting Whinchat.  Stopping to check out the bay below we then found a good number of Coot along with many Great Crested Grebes.  And so our drive continued picking up more Carrion Crows, House Sparrows and Marsh Harriers with the final species being a male Blackbird before heading off site to take the country lanes back to towards the motorway.

Check out the accompanying website at http://www.birdingaxarquia.weebly.com for the latest sightings, photographs and additional information
Posted by Bob Wright - The Axarquia Birder at 22:10