At precisely 13.30 local time we reached the Pyrenees summit at  Col de Somfort and crossed back into Spain.  A stop for coffee at the small cafe and what a way to restart our Spanish birding with a delightful trio of Griffon Vulture, House Martin and Alpine Accentor!  Also Spotless Starling before starting our decent to Canfranc Estacion.

Once parked up at Canfranc a look over the wall at the River Aragon produced both Grey and White Wagtails but no Dipper on this occasion.  However after a long-missed menu del dia we then recorded House Sparrows and a trio of Carrion Crows before spending time observing the progress that has already been achieved on revamping the original international railway station, once (so I believe) the second largest railway station in Europe.  I also believe it is still on the agenda to reinstate the railway line on the French side of the border so returning a wonderful scenic route between Canfranc and Pau.    Just imagine taking the High Speed train form Malaga top Zaragoza and then catch the new rail link to Pau and onward to Paris followed by Eurostar to London.  What dreams but in my life time? 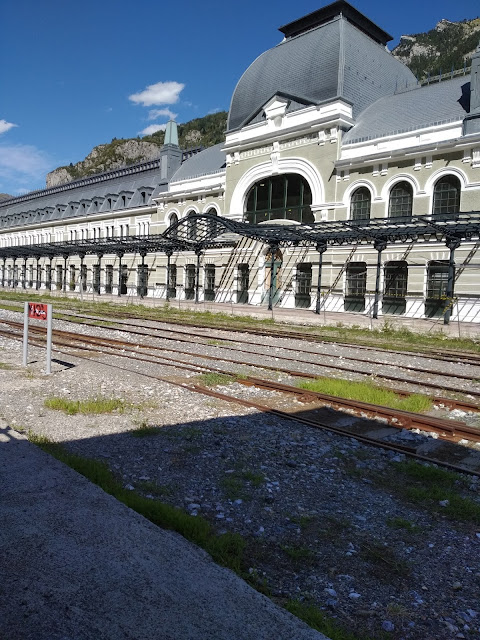 May only have been recorded eight species but still good to be back and the possibility of a visit to the large laguna of Gallocanta, south of Zaragoza, as we make our way eastwards to Valencia for a couple of nights with youngest son. (For more information follow these links: 1. ONE and 2.TWO )

Posted by Bob Wright - The Axarquia Birder at 12:10