Up early and out of the house by just after 5.30 as I headed off for about three hours at the Desembocadra del Guadalhorce in Malaga before the temperature got too hot for any enjoyable birding.  However, approaching the site it was still dark so took a slight diversion via the airport to call in at Zapata on the off-chance that I might get to find a Red-necked Nightjar or two.  I did not.  But sitting at the ford in the dark and about to turn the car round, I did see a lone Little Ringed Plover.  Then it was back via the airport and on to the Guadalhorce and all set up to start my visit as daylight got under way just before 6.45.

Lots of Common Swifts about as I made my way to the footbridge and a very voluble Sardinian Warbler singing from the cover of a large bush behind the fence on my left.  Crossing the footbridge the House Martins had put in an appearance and looking upstream, just before the motorway bridge, a couple of Night Herons had, presumably, spent the night roosting on an old tree stump in the river.


Approaching the Laguna Casillas I had a single Zitting Cisticola on my left and at the water itself very little to be seen apart from the nesting Black-winged Stilts.  Eventually a handful of Mallards, in addition to the pair that flew out of the reserve just after I entered, and then a pair of Little Grebes.  Behind me in the extensive reed growth numerous singing Reed Warblers and then a couple of Blackbirds in the vegetation below the hide.  At least a quartet of Moorhen along with half a dozen Coots on the water before I departed towards the sea.

Much had changed at the Wader Pool with almost all of the water now gone.  Just a few Black-winged Stilts and nothing to be seen in the distant large, bare trees.  So straight on down towards the Rio Viejo (Old River) where, again, most of the water had disappeared.  Yes, I did find a single Ringed Plover and there was a small flock of around two dozen Audouin's Gulls plus a single Heron.  I spent some time watching a circling Gull-billed Tern hoping hat it might alight with the gulls but then, apart from the pair of Lesser Black-backed Gulls resting close by, another handful flew across the track in front of me accompanied by a single Black-headed Gull and a pair of Sandwich Terns.

Walking on towards the Sea Watch I had a Crested Lark on the track and then a Greenfinch and small charm of Goldfinch to my right.  Still the continuous supply of swifts but now mainly of the Pallid variety along with a small number of House Martins.  Indeed, the House Martins and both Common and Pallid Swifts were to stay with me all morning.  Even a lone Stonechat put in an appearance of the protected area near the beach.  Nothing to see from the Sea Watch until I found a single Great Skua resting on the water and preening at a good distance from the shore.  It rather surprised me as I thought these birds might have moved on by now; perhaps a non-breeder for whatever reason.

Working my way back and the Sun now well and truly up in the shy and the temperature rapidly climbing, I began to see the first of the morning's Barn Swallows and then a single Little Egret on the Wader Pool.  However, this bird soon departed and passed overhead to be joined by a second individual and then a third as I approached the Laguna Escondida.  Here, again, very little bird life with mainly Mallard, a couple of Coot and, maybe, as many as four pairs of Little Grebes with their respective families.  Whilst at the Escondida I also added some foraging Monk Parakeets along with a flock of roving House Sparrows.

And so to the main hide overlooking the Laguna Grande.  A few more Black-winged Stilts and the first Collared Doves of the morning before the arrival of a small flock of Spotless Starlings.  In a tree to my left a single Cattle Egret and just beyond a small roost of Mediterranean Gulls.  No sign of any Flamingos but a single Spoonbill in their stead.  And as I pointed it out to my neighbouring Spanish birder he commented on the single adult Flamingo that had just arrived, and within a couple of metres of the Spoonbill.

Meanwhile, immediately below the hide, a single Kentish Plover was walking the edges and eventually joined its mate and to the right a lone Slender-billed Gull.  The passing birds behind me included a lone Kestrel and, by now, the calling Bee-eaters had arrived.  Finally, at the far end of the water in the dead trees I managed to find the resting Peregrine Falcon to give a finally tally of the morning of 40 species and back home by 10.30 and with the temperature now already up in the high twenties. 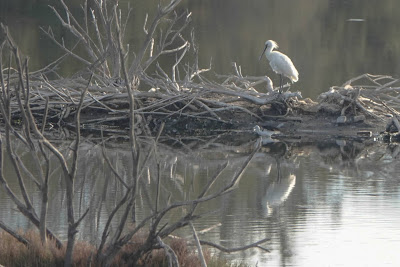 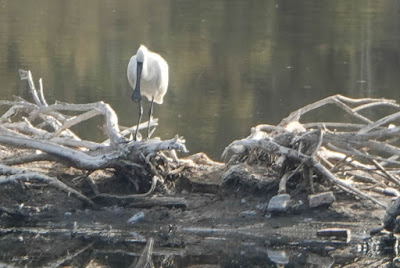 Check out the accompanying website at http://www.birdingaxarquia.weebly.com for the latest sightings, photographs and additional information
Posted by Bob Wright - The Axarquia Birder at 08:17