Away from home by 6.30 this morning to meet up at El Torcal for an 8am start with our little "Malaga Group" including Derek and Barbara Etherton, Jerry and Barbara Laycock and Mick Smith.  Beautiful, clear and sunny start and aleady in the mid-twenties as I approached the lower car park to  El Torcal recording both Barn Swallows and Wood Pigeons as I approached.  Once all gathered, we quickly recorded Greenfinch, Crag Martin and Woodchart Shrikes before finding a hovering Kestrel.  Below us we could hear a pair of calling Turtle Doves and eventually found one atop an electricity pylon.  Lots of small family group including Goldfinch and Stonechat and even a small number Blackbirds.  Micky was first to identify a couple of Orphean Warblers and as we set off up the hill  numerous Stonechats along with a Rock Bunting before finding a quartet of Black Wheatears.  But then a little difference as we found a very stationary Black-eared Wheatear.


Our intermediate stop enable us to find many Blue Rock Thrushes, never mind all the local Ibex, followed by Black Redstart and Serin. Next an Olivaceous Warbler then  three distant Griffon Vultures.  Moving on up to the top and the car park we added a handful of Chaffinches.


Once at the car par we immediately found a trio of recently fledged Black Redstart with parents close by and a more Subalpine Warblers.  Whilst the remainder of us were wandering around the back of the rocks Babara E. stayed near the car and caught up with a few Linnet.  Then it was down below the Visitors Centre where we found more Black Redstarts, a family of Melodious Warblers and the odd Rock Sparrow, not to mention the resident House Sparrows around the building itself, before hearing the Sardinian Warbler. 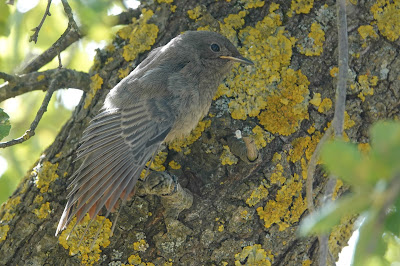 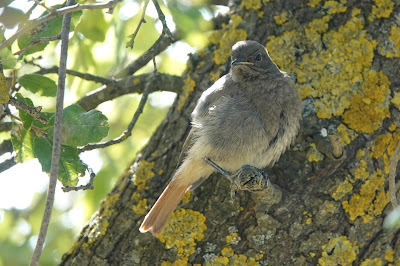 Time to make our departure and we were seen off buy a single Blue Tit and a stop on the way down, not for the Subalpine Warblers, Blue Rock Thrushes and Corn Buntings but a single Northern Wheatear.

Following a brunch stop near Casabermeja we continued on to Rio Gordo and took a narrow road down to the Rio de las Cuevas.  The ford was dry and we dove upstream a hundred yards to park up under the trees and walk the dry river bed in search of our target bird, the Golden Oriole.  Nothing but immediately more calling Turtle Doves.  There appeared to be many barn swallows about and then a trio of Red-rumped Swallows.  No shortage of Spotless Starlings and we could hear calling Blackcaps before finding a Collared Dove.  Blackbirds and Goldfinches were also seen a plenty.

Continuing on up stream we added some lovely Serins and found a small group of House Sparrows and a Greenfinch bathing/drinking in a small stretch a clear, running water.  The nearby trees gave a lovely view of Spotted Flycatchers feeding a youngsters but most of the time as spent trying to find the small birds "flitting" about under some thick growth at the top of the nearby bank.  Barbara L. was the first to notice the Nightingale cross the track in front of us and whist the Olivaceous Warbler was relatively easy to identify, we all spent considerable time trying to "lock on" to the mystery pair of birds in the same space.  Eventually, we managed to get clear views and able to confirm a pair of Orphean Warblers.


And so we prepared to say our good-byes and make our departures home.  At that moment a fleeting glance of a female Golden Oriole skipping over the trees in front of us followed by a calling male to our left.  No sooner had we looked upstream than, sure enough, a male Golden Oriole crossed the track to the trees on the other side.  What a wonderful way to end the morning and a total of 42 species. 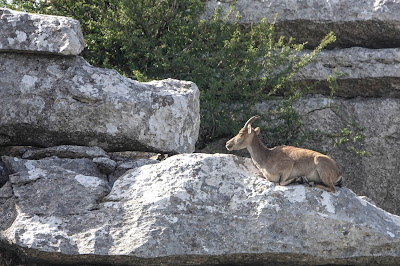 Check out the accompanying website at http://www.birdingaxarquia.weebly.com for the latest sightings, photographs and additional information
Posted by Bob Wright - The Axarquia Birder at 12:25