Birding in Holland: Day One

Yesterday was a day of recovery following the long drive from Lincolnshire to Wuustwezel in Belgium including the Chanel crossing from Dover to Calais.  Mind you, this did nit stop Marieke introducing me to the joys of an electric bicycle so that we could cycle up to her local patch and then take a 5km walk through the woods and fields including the sight of one of this year's successful Goshawk nests.

Today Marieke drove to a well-known area for Purple Herons, our target bird for the day.  Somewhere north of the Belgian border and about 40 km inland from Rotterdam, we started at Zouwen Dijk, a lovely, dense reed bed.  No sooner had we got out of the car than a Purple Heron flew left to right whilst on the opposite side of the road we had a quartering Marsh Harrier. This site also turned up lots of Lapwing, Barn Swallows, Mute Swan and then the arrival of a pair of White Stork and a couple of passing Cormorant.  Also present were Wood Pigeon  and Black-headed Gulls.  Next it was round to the far side of the area having driven through one of many towns and villages named "Sluice" where we picked up a young Buzzard and then three others circling above.


A walk to the hide and on through the meadow produced Great Crested Grebe, Teal, Gadwall, Mallard and Moorhen on the water.  Reed Warblers were calling as were both Goldfinch and Coal Tit.  Kestrels overhead and a small number of Greylag Geese along with a couple of Egyptian Geese to add a little insipid colour.  Marieke saw and heard both the Blackbird and Robin before one, then two more, Jays slipped across the path in front of us.  Whilst in the hide a quartet of Black-tailed Godwit flew across the water and over us.  Before leaving the site we also managed to add Mute Swan, a rather delightful Song Thrush, single Chaffinch and the first of the many Grey Herons that we were to encounter during the rest of the day.

The drive back took us along the top dike overlooking the River Lek; all very pretty and delightful little villages hugging the banks.  Finding a lane running parallel to the river but one road back, we were able to check out the very many small dikes that seemed to be positioned about every 100 metres.  Lots more Lapwing but, having stopped to check the Grey Herons, we were able to add a second Purple Heron.  However, best was to follow as walking back to the car it was not so much yet another hovering Kestrel but a Goshawk passing over and giving a good silhouette.

From here we made our way to Schoonhaven to cross the Lek on the little car ferry.  Whilst waiting for the roll-on ferry to arrive we looked over the side of the road and were amazed to find 50 plus Egyptian Geese resting on either bank or nearby water and a similar number of Lesser Black-backed Gulls.

The followed  most beautiful drive down one of the well-known "green roads" as it it followed the meandering River Vlist; absolutely wonderful and well worth the experience with out sight of any birds.  But we did in fact add Rook, Jackdaw and Starling and the most common sight throughout the day the large numbers of Carrion Crow and Magpie plus, on this occasion, very many Herons and Coots. 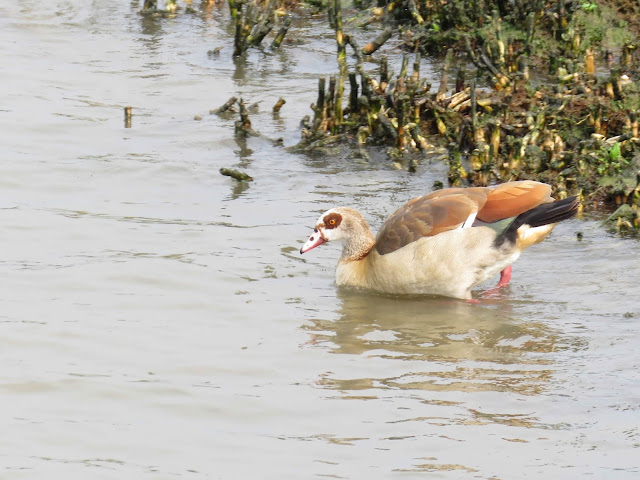 Birding done for the day so we made our way to Gouda where we were able to enjoy the old market square and some beautiful old buildings - as well as both sampling and buying some of the local produce.  Then it was on the Marieke's family summer home on the lakeside at Reeuwijk where we were able to sit and watch the sun go down along with Marieke's brother.  Wonderful end to a lovely day albeit we still had a ninety minute return journey to Wuustwezel.

Check out the accompanying website at http://www.birdingaxarquia.weebly.com for the latest sightings, photographs and additional information
Posted by Bob Wright - The Axarquia Birder at 06:16