Back in Spain for the final full day


Interesting experience last night at my mixed dormitory for six persons in a small hamlet just south of Zubiri on the Spanish side of the Pyrenees.  Beautiful accommodation to cater for those hardy soles undertaking the grand walk but the guest was a miserable, ugly old so-and-so.  On the other hand, I had the whole room and en-suite to myself and great value st 15 Euros plus 3 for the sheet and 2 for the towel hire!  With Red Kites and Magpies along with a White Wagtail I also took the opportunity to pay a visit to the high reservoir at nearby Eugi which produced a solitary Great Crested Grebe.

But this morning the clouds had cleared and it promised to be a lovely day, too hot in fact and the temperature over 35C when I arrived in Daimiel at about 6pm to check in to a lovely clean and comfortable hostal.  Off by 8.15 and a quartet of Magpies on a roundabout as I passed through Pamplona on my way to Navarra's Laguna de Pitillas.  Time to spend over two hours here at a lovely reedy site with lots of water.  Alas no Great Bittern but rather surprised to find three Mute Swans.  Informed that a pair turned up about four years ago and remained to breed and the site now holds a resident population of ten.   Lots of Coots and ducks were mainly Mallard with a few Shoveler and Common Pochard.

Beneath me I had "ticking" Bearded Tits along with both Reed and Great Reed Warbler and also managed to record a single Willow Warbler.  Entering the site at an old, closed restaurant there were a number of House Sparrows and Spotless Starlings plus a juvenile Grey Wagtail but the first bird recorded on the approach road was a Buzzard.  Also on the water both Little and Black-necked Grebes and then a handful of Gadwall at the far end of the water.  Numerous Barn Swallows feeding over the water and adjacent fields along with a plentiful supply of Sand Martins.  Two Kestrels recorded and, finally, a female and two juvenile Woodchat Shrike.

With a long journey ahead of me time to press on and make my way south-west via the outskirts of Madrid and then south for the overnight stop at Daimiel.  Hardly had I left the site and reached the main N121 road than a Golden Eagle passed low over the road in front of me and whilst trying to make a safe stop noticed that it was followed, strange impressions one gets when driving and watching at the same time, by a Booted Eagle.  Not five minutes later a pair of Carrion Crows on my side and then a Red Kite on the other,  Naturally, there was the usual sighting of Wood Pigeons during the long drive.

Once booked in at the hostal and case deposited, etc I took myself off to the nearby Laguna de Navaseca.  Straight down to the bottom hide only to discover that all had dried up on the right but some very interesting birds exposed in the shallow water to the left.  Whilst you could not miss the many Coot and Black-headed Gull it was the Glossy Ibis that caught my attention.  A scan with both binoculars and scope produced a number of Lapwing plus small numbers of Dunlin, Common Sandpiper and Black-winged Stilt.  Net up a Ringed Plover and whilst looking through the scope a Black-bellied Sandgrouse walked through the resting birds on the dried mud to drink at the water's edge.  Too late for a photo as the bird was up and away as soon as it saw my slightest movement.

On the water a good number of Mallard with a few Shoveler and, eventually, a female Red-crested Pochard with a four small ducklings. Over the water feeding Barn Swallows which led to me locating a number of both Collared and Rock Doves to add to the local Wood Pigeons.

Round the corner at the bottom hide I found a score of Glossy Ibis along with three Green Sandpipers and a couple of Snipe.  It was amazing to see the number of very young Coot and White-headed Ducks so these birds were, presumably, late breeders.  The same was also true of the many Little Grebe on site. 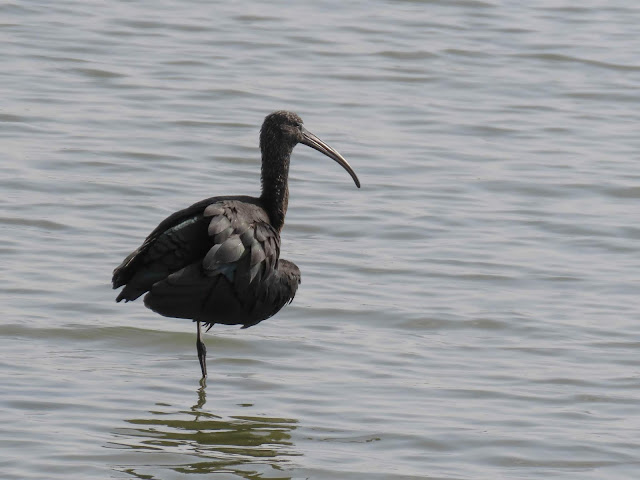 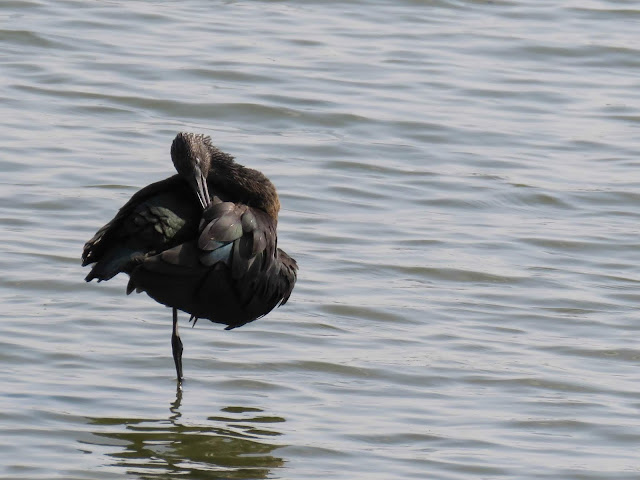 Once on the track oat the back of the water I could see the large number of White-headed Duck and also recorded both Crested and Short-toed Lark on the path along with Spotless Starling, loads of these birds about, a single Stonechat and Goldfinches.  Looking across the water I was able to see the rear end of a Purple Swamphen working the margins and many Moorhen.  The water also had a few Lesser Black-backed Gulls and, in the far distant corner hidden from previous view, a trio of Flamingo.  It was also here that I found at least six Little Egret and later counted nine perched in a dead tree at the far side of the laguna.


Back to the start, and finding a Little Owl on the old ruined barn, and a look at the water from the main hide where I found a Red-crested Pochard with her young and a couple of fishing Common Tern.  A Marsh Harrier was quartering the reed bed on the far side and I finished the day by discovering to where the adjacent road led.  Not only to the water treatment plant but a further hide overlooking the far end and here, conveniently perched on a wire, a couple of juvenile terns which I suspect might be Whiskered Terns.  I shall need to study the photograph to confirm - assume I have a reasonable shot of same.  so less than a couple of hours duly produced 36 species.


Check out the accompanying website at http://www.birdingaxarquia.weebly.com for the latest sightings, photographs and additional information
Posted by Bob Wright - The Axarquia Birder at 13:34