A lovely sunny morning, despite some finding it a little on the breezy side as they left their respective homes, for the Axarquia Bird Group's private visit to the Charca de Suarez resrve on the western outskirts of Motril.  Great to see long-standing members Marcus, Gerry and Patrick again along with Derek, Micky and Jerry who had driven over from west of Malaga, Olly who put in the kilometres to drive west from Roquetas de Mar and Steve from, in this company, the relatively close proximity of Frigiliana.  A great mornings birding in good company; not so much the quantity as the quality of species.

Arriving close to the site to take the short drive along "Turtle Dove Alley" I had a Cattle Egret fly over the road and away and, naturally, there were Spotless Starlings, House Sparrows and Collared Doves.  Turtle Doves heard in the ally of their name and then, at 9.30, into the reserve as a group before individuals deciding where they would like to visit first.  Lots of House Martins about and many Pallid Swifts but not until nearly the end of the morning did I record my first Common Swift.

With all quiet and no other visitors, six if us headed straight to the Laguna del Taraje in the hope that the Little Bitterns might be about.  We were not to be disappointed.  Two on show the whole time and a total of four individuals recorded.  Not only did a Purple Swamphen put in an appearance but we also had a Red-knobbed Coot with a single chick; don't often see this bird on this particular water.  Also present Coot, Mallard and Little Grebe, all with their youngsters, and the deafening sound of both Nightingales and Cetti's Warblers. A single Hoopoe flew across the back of the water above the tress and we had a  a couple of sightings of Reed Warbler. Our first Turtle Doves were seen although their calling was almost continuous.  I suspect I may be way out if I suggest hat there must be at least a dozen breeding pairs in the immediate area. 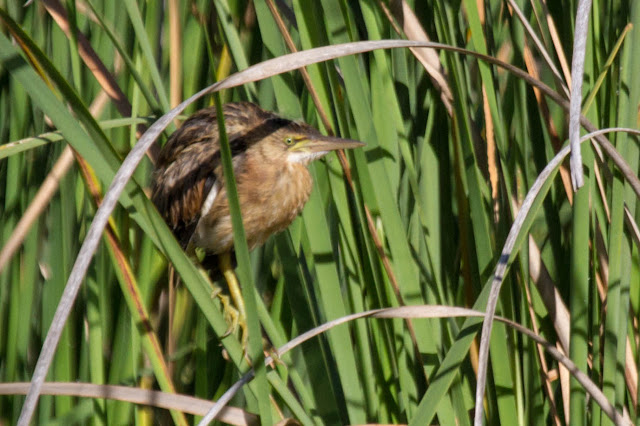 On to the Laguna del Alamo Blanco where the local White Stork was still present along with a single Snipe.  More Coots and Moorhens with an older group of Mallard ducklings but, perhaps, the pick of the birds were of a smaller size.  Pallid Swifts, House Martins and both Barn and Red-rumped Swallows  with, in the tall grasses at the back, a male Reed Bunting.  But then, not only a flock of a dozen or more Common Waxbill but also maybe as any as four of the local Black-rumped Waxbills.  I wonder if these two related species inter-breed? More Reed Warblers and a Zitting Cisticola along with  the occasional sightings of Blackbirds were also noted. 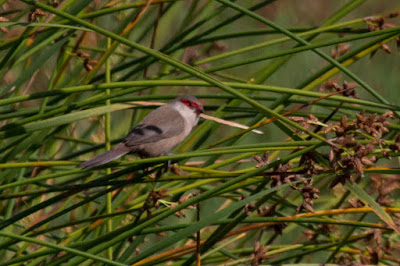 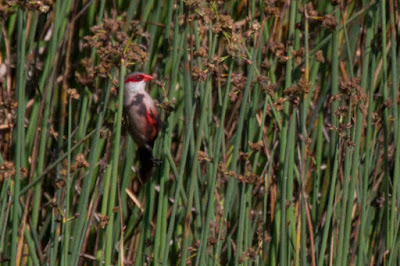 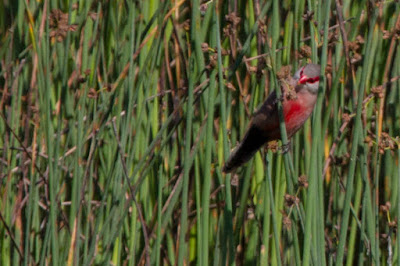 Walking to the Laguna de las Aneas we recorded both Goldfinch and Sardinian Warbler but also had the first Bee-eaters fly over with their usual plaintiff calling.  The water itself was relatively quiet with very few Mallard, the only duck species present, and Common Coots.  A pair of Red-knobbed Coots very close to the hide with a couple of chicks confirming that these uncommon birds may have had an excellent breeding season with most surviving predation from the roving Yellow-legged Gulls.  Just the one Heron resting in a tree to the right. 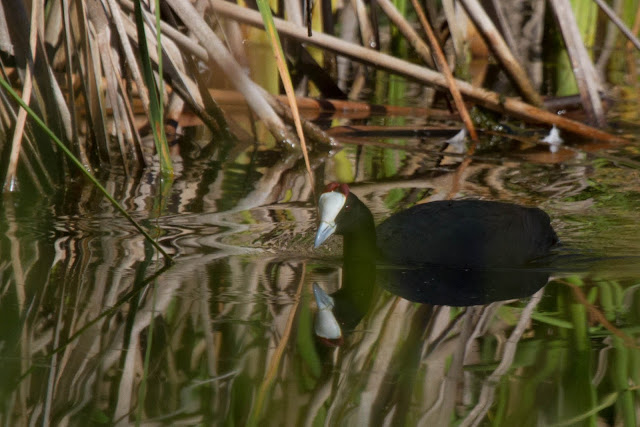 As we expected, we picked up Spotted Flycatchers and many Nightingales walking down to the hide overlooking the Laguna del Trebor from where yet more Red-knobbed Coots were recorded.  A juvenile Greenfinch and a pair of Serin offered something a little different for the morning.  Then, as well as the few Common and many Pallid Swifts it was time to make our departure at 1 o'clock but not before Jerry had noticed the resting Common Kestrel.


Four of us decided to drive up to the picnic area at Velez de Banaudalla in search of the breeding Dippers.  Both Grey and White Wagtails, lots of Spotted Flycatchers and Chaffinches, singing Golden Orioles and loads of House Sparrows but not a Dipper to be seen.


Then off on the homeward journey with a slight detour to take in the hills above Cerro Gordo to discover if the White-rumped Swifts had returned.  A  beautiful male Blue Rock Thrush was on almost constant display, often with food in its beak so a successful nest somewhere near the building site.  The odd Pallid Swift noted as we scanned the skies we eventually found more and more of these lovely swifts. Not just one Common Kestrel flying overhead but suddenly the appearance of a second as he harried the much larger female Peregrine Falcon.  All this excitement led to our eventually finding  a White-rumped Swift, very high initially but later a little lower, but still high, altitude.  Having brought a smile to our faces Derek then pointed out the Black Wheatear which suddenly appeared in the trees below and as I drove back to Mezquitilla to collect bits and pieces to take into Jenny at the local hospital, a few House Martins arrived on the scene and a pair of Red-legged Partridges casually walked, at their very slow leisure, across the road in front of the car.


Check out the accompanying website at http://www.birdingaxarquia.weebly.com for the latest sightings, photographs and additional information
Posted by Bob Wright - The Axarquia Birder at 07:07