Ten of us present at Sierra Loja for the April meting of the Axarquia Bird Group travelling from as far afield as Competa to the east and Marbella to the west.  Good to see Eric and Pat Lyon again and a welcome to new particpants Lindsay and  Elizabeth Ferguson along with Peter Ashley.  Also present Barbara and Derek Ethertona and Barbara and Jerry Laycock.  So, come 9.40, we were on our way up the mountain with two target birds in mind, the summering Rock Thrush and the local breeding pairs of Spectacled Warbler.

No sooner had we left the car park than we stopped to observe a mixed group of Goldfinches and Cirl Buntings.  A first stop at the lower picnic area produced Greenfinch and Serin plus  the first Black Wheatear of the morning.  Naturally we had seen the local Collared Doves and, once among the trees, not only Chaffinch and Blackbird but numerous Mistle Thrushes and Azure-winged Magpies.  Then, of course, there were all those Wood Pigeons moving about.

By the time we were ready to walk up the track to the old quarry to check out the Eagle Owl's nesting site, we had also added Barn Swallows and the first Stonechat.  No sign of the Eagle Owl but a good number of Choughs moving about the cliff face along wiyh the occasional Rock Bunting. No sooner had the Sardinian Warbler disappeared from view than I had a Black Redstart move up into a small oak tree which, in turn, revealed what I think most of us agreed was a Common Chiffchaff.  Not so much the Red-legged Partridges nor the few Jackdaws but the surprisingly clear sight of a Spectacled Warbler that took us by surprise, the first time that I have seen these lovely little warblers away from their traditional breeding site. 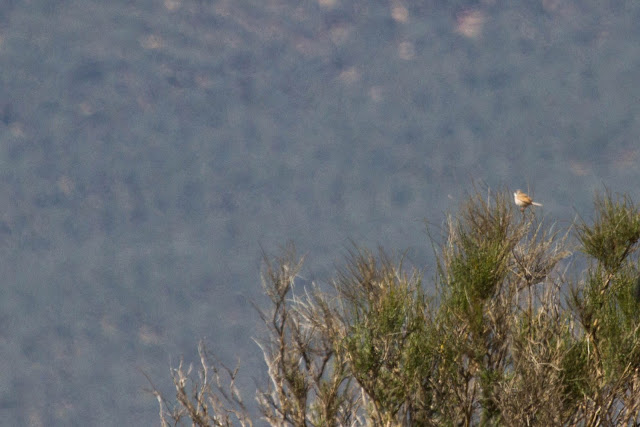 A little magic moment followed with not ony a resting Little Owl but high above Derek had picked out a drifting Griffon Vulture and, looking above the bird, we then found a Golden Eagle.  Only when we relised that Derek and I were actually looking in different directions that we realised we had not one but two individuals.  And in the same area we heard and then saw two of the breeding Spectacled Warblers.

Now we were very much in "Wheatear Country" as we passed the electricity station and, sure enough, had good views of both Northern and Black-eared Wheatear.  Ere long we had reached the Charca del Negra pools and what pools they were, I have neer seen then so full and the main pool must surely have been somewhere about five metres deep as the water almost reached the top of the support wll.  But still the pool had visits from both Rock Sparrows and Black Redstart.

Now that we had driven to the top track we were all intent on finding the illusive Rock Thrush.  Blue Rock Thrush, Crag Martin, Spotless Starling, Kestrel and Woodchat Shrike but where was the target bird?  Eventually, at the far end of the track, Derek, yet again, saw the slight movement on the summit, cars stopped and much work with bins and scopes finally found our bird, the first, and only, Rock Thrush of the day.   Whilst awaiting a decision on whether or not to visit the water deposit at the bottom of the hill (we decided to give it a miss this time), we were able to watch the antics of a pair of Litle Owl on the cliff face in front of us.

At this point we decided to call it a day and made our way either down the mountain or, as in the case of Lindsay and Elizabeth, continue on along the track in the hope that they found, if not Zafarraya, at least signs of civilisation!  But no, hardly had we started our way back when Derek and others, having heard the bird calling in a nearny tree, had wonderful vews of a Western Orphean Warbler.  Not so much achieving our two target birds but certainly another three as a bonus in the shape of the Orphean and the earlier Goshawk and Golden Eagle.

Check out the accompanying website at http://www.birdingaxarquia.weebly.com for the latest sightings, photographs and additional information
Posted by Bob Wright - The Axarquia Birder at 07:28